The bionic boy! Meet the rugby-mad 10-year-old with an artificial limb who was chosen as a mascot for the England squad

When rugby-mad Jacob Pickering got his bionic arm three months ago he never imagined that he would be using it to shake hands with the England team at Twickenham.

But Jacob, ten, put the arm to good use when he was invited to be a mascot at a Six Nations match.

Jacob, who plays for Blackburn rugby club, said: ‘It was the best day of my life. I really enjoyed meeting the players and showing them my arm.’

The boy from Blackburn in Lancashire, was born without an arm due to a condition in the womb called amniotic band syndrome. 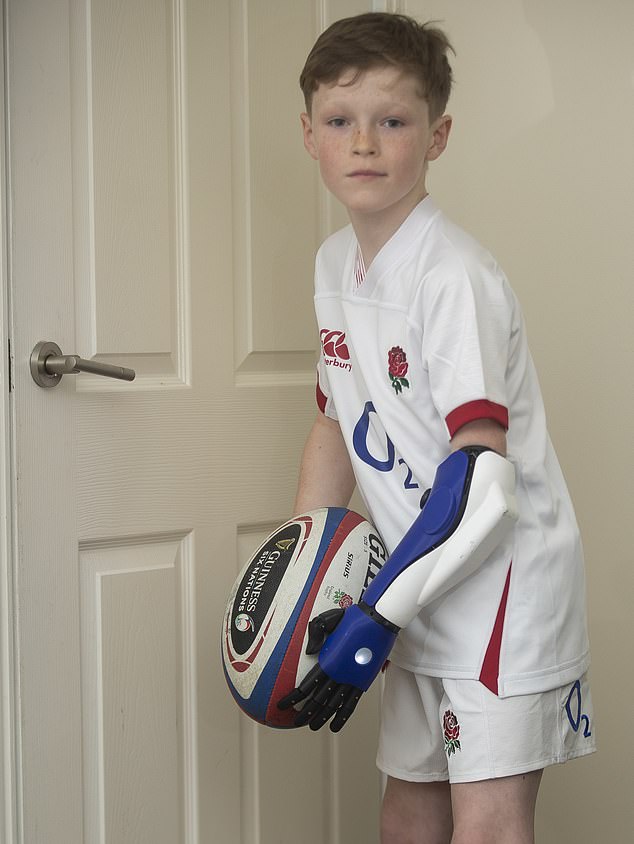 In December, after years of struggling with NHS prosthetic limbs, he got a 10,000 Hero Arm – the first approved prosthesis in the UK which enables precise and delicate movements. It means he can hold a rugby ball, use a fork and do up a button. And last weekend he used it to shake hands with the England rugby team.

His mother, Kathryn Litherland, said: ‘When he was three he asked me when his hand was going to grow back, which was heartbreaking.’

She came across Bristol-based firm Open Bionics when looking for alternatives for Jacob. They were making a high-tech ‘Hero Arm’ limb where muscles in the upper arm control the fingers.

Mrs Litherland said: ‘We couldn’t believe it. It was like a dream come true for Jacob.

‘He has managed to adapt to not having a left arm, but this Hero Arm was going to massively help him. His NHS arm was heavy and made his arm tired so he didn’t like wearing it. But he thinks this is wonderful to wear, and so much more comfortable – it’s like having a hand for him, rather than just a grip.’

The arm is blue and white, the colours of Jacob’s favourite football team Blackburn Rovers. It weighs less than a kilo and has been completely tailored to Jacob.

Each piece was individually printed and put together by hand, making sure the sensors were correctly placed and the socket was shaped exactly to Jacob’s limb.