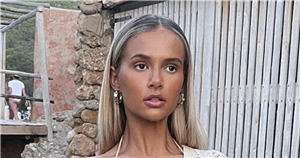 Molly-Mae Hague has said she gets a "kick" out of responding to trolls who repeatedly send her hateful messages about her appearance.

Speaking candidly about tackling online bullying, the former Love Island star admitted trolls are usually shocked when she replies – with many of them going on to express their love for her.

The PrettyLittleThing Creative Director told Patricia Bright on the YouTube series If I Could Tell You Just One Thing: "Sometimes I'll actually reply to people that send horrifying DMs.

"I'll just message back and be like, 'What made you wanna send this DM to me?'"

"They'll probably be like, 'Oh my gosh. Molly-Mae, I can't believe you replied. Love you.'"

Molly explained: "Like, this really is crazy. Insane to think that these people were actually just trying to get a rise out of you, they're trying to get you to reply by sending you a foul message.

"It gives me a little kick. I'm like, 'This person will never think I'm probably gonna even see this message'. But I have seen it, and I want to see how they feel now they know that I've seen the message of them calling me fat."

The blonde bombshell also credited her close group of "super positive" friends and her boyfriend Tommy Fury for helping her get through the nasty comments.

"Being around Tommy 24/7 is obviously great because those comments… Oh, my goodness. He's so good at dealing with them. Somehow it makes me feel like they just could not matter at all," she said.

Molly has gone from strength to strength since her stint on Love Island and she was recently announced as the new Creative Director of online clothing brand, PrettyLittleThing.

Asked what her job entails, Molly-Mae previously said on Instagram: "So basically I have creative input/lead within multiple areas of the brand e.g. marketing, buying, Influencers.

"It's a 24/7 role… sharing ideas, coming up with incredible new concepts, having input on shoots, events, you name it," the star continued.