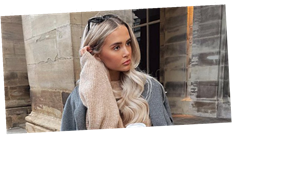 While Molly-Mae Hague took to her Instagram while watching Celebs Go Dating: The Mansion on Wednesday night, she said she thought it was suspiciously similar to Love Island.

The 21-year-old star, who came runner-up on the ITV show alongside her boyfriend Tommy Fury, also 21, in 2019, said she was “confused” when watching the episode and asked her followers whether they also found it to be very like Love Island.

Posting a clip of the programme on her flatscreen TV, Molly wrote on her Instagram story: “I’m confused… This Celebs Go dating is literally Love Island is it not?…”

The Pretty Little Thing ambassador added a poll where her fans could either agree by voting for: “Love Island vibes” or sway for the other option by pressing: “Don’t see it.”

Molly’s best friend Maura Higgins’ ex boyfriend Curtis Pritchard, 24, signed up to find love on the show before taking a swipe at the brunette, who is now dating fellow Love Islander Chris Taylor.

While the dancer broke down into tears when he reflected on his and Maura's break-up during filming, he has now said he wants a “real life lady”.

“Ever since being on Love Island I do think my type is blonde hair, a very athletic figure and just a very natural and bubbly personality, really. Somebody that really appreciates others,” he shared with The Sun.

"A real life lady, because let's be honest, Instagram models, are they how they look on Instagram? Sometimes they are, sometimes they're not. If you want the honest truth, put it mildly.”

While the hit celebrity dating show is finally back, this series shows the stars and their potential love matches staying together in one mansion.

The celebrities will be receiving advice from dating experts Paul C Brunson and Anna Williamson, with the assistance of Tom Read Wilson.

The show will see the likes of Geordie Shore’s Chloe Ferry, Tom Zanetti, Made In Chelsea star Sophie Hermann and Wayne Lineker try to find their perfect matches.

After the series began, viewers were stunned when 58-year-old Wayne admitted he has never dated a woman older than 30.

When the Ocean Beach Club owner was on a date with 39-year-old Hannah, he confessed his previous girlfriends have been “25-30” which saw her say: “I feel like an OAP now.”

One viewer took to Twitter to write: “I'm sorry Wayne but the 39-year-old is too young for you too. 20-year age gap."

Another commented: “Anyone else feel uncomfortable every time Wayne comes on the screen? 'I won’t date older than 39'… sweetie you're 58, why?"

Back in November 2019, Wayne separated from 25-year-old model Danielle Sandhu, after they were together for four years and were engaged at the time.