‘We’re thrilled to share our story with the world’: Naomi Campbell to star alongside Cindy Crawford, Christy Turlington and Linda Evangelista in new docuseries The Supermodels

Naomi Campbell is set to star in a brand new docuseries The Supermodels, which will follow the iconic careers of herself and her fellow models.

The catwalk Queen, 50, will feature in the Apple TV+ series alongside Cindy Crawford, Linda Evangelista and Christy Turlington, with the programme taking a look back how they made a huge impact on the 90s fashion scene and beyond.

The series will be directed by the two-time Academy Award winning Barbara Kopple, while it will be executive produced by Brian Grazer and Ron Howard’s Imagine Documentaries. 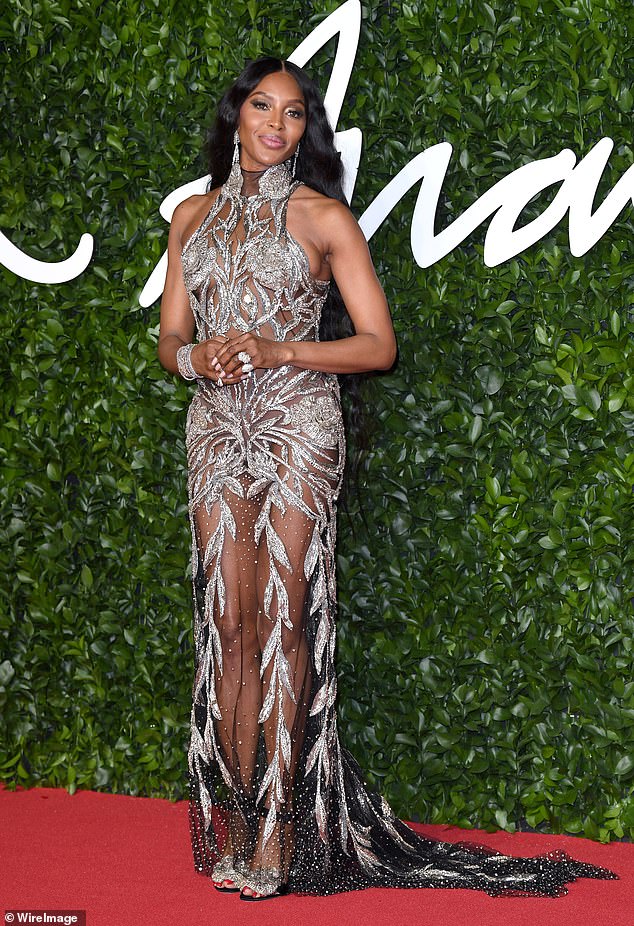 Catwalk Queen: Naomi Campbell is set to star in a brand new docuseries The Supermodels, which will follow the iconic careers of herself and her fellow models

Speaking about her new venture, Naomi told MailOnline: ‘My sisters Christy, Linda, Cindy and I are extremely thrilled to share our story with the world and there could be no better partners than Brian Grazer and Ron Howard which is a dream come true to bring it to life, as we knew they would respect and honor our story.

‘We hope our journey seen in the docuseries will encourage, motivate and inspire young people around the world. We look forward to this great adventure ahead with director Barbara Kopple.’

While Cindy, 54, wrote on her Instagram page: ‘I’m excited to reunite with my friends to both celebrate and examine the way supermodels transcended the traditional perceptions and limits of modeling in the fashion industry through time. 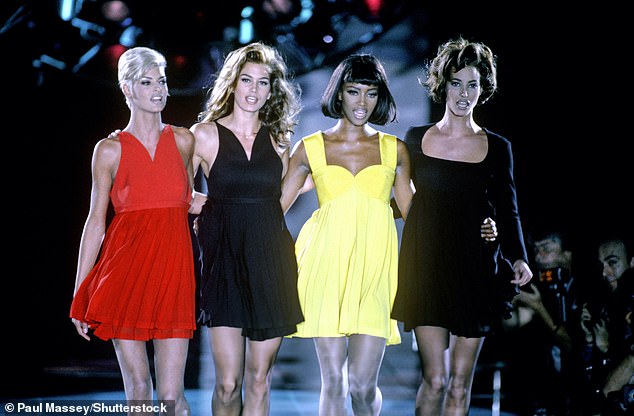 Icons: The catwalk Queen, 50, will feature in the Apple TV+ series alongside Cindy Crawford, Linda Evangelista and Christy Turlington

‘With the support of Imagine Documentaries and Academy Award-winning director Barbara Kopple, we plan to explore the dynamic personalities, and shifts in media and culture that helped shape and define this iconic era.’

The Supermodels will take fans back to the 1980s at the start of their modelling careers and document how the four women came together from across the globe and collectively achieved a notoriety that transcended throughout the industry.

The four-part series will also examine the ladies work today, in not only the fashion industry, but activism, philanthropy and business, and how the quartet have blazed a path for the next generation. 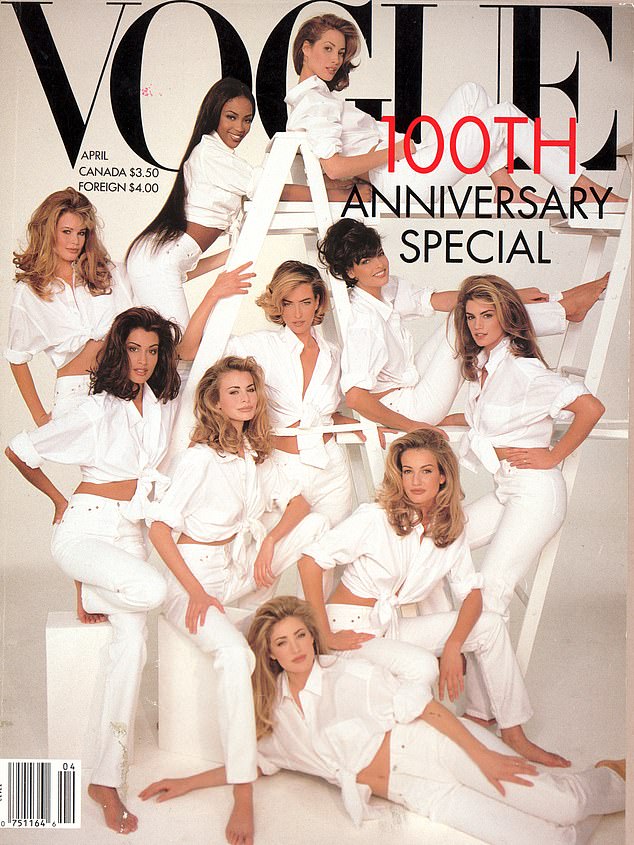 They were part of the ‘it’ model crowd: The four women seen with other supermodels on the cover of Vogue in 1992 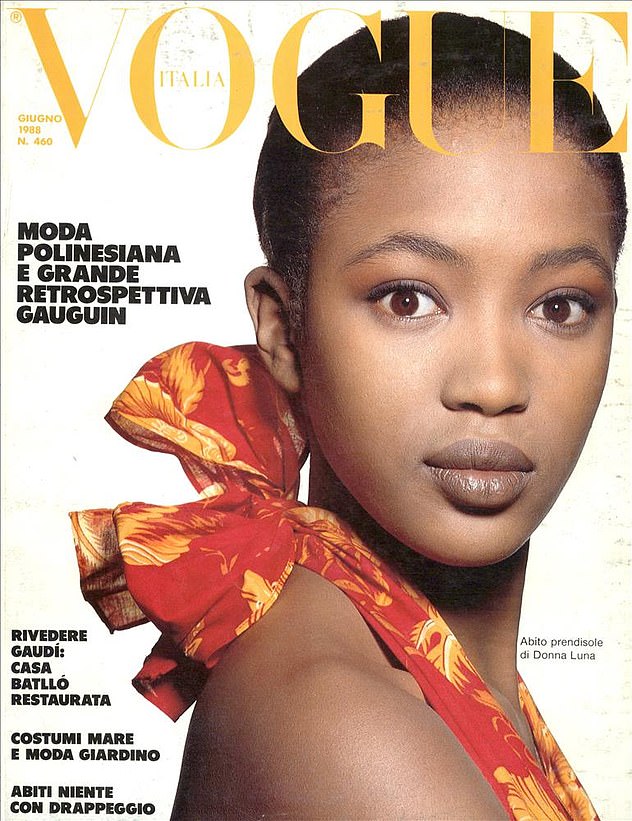 Her very early years: As a young model on the cover of Vogue Italy

Linda, 55, said of the series: ‘To finally have the opportunity to tell our story in collaboration with the brilliant team at Imagine, and under the direction of Barbara Kopple, is as exciting for us as we hope it will be for viewers.

‘I would love for people to see this as a celebration of not only our individual stories, but also to the power of friendship, dreams and perseverance.’

While Christy, 51, added: ‘ I am looking forward to looking back on this unprecedented time in fashion with these incredible women whom I have grown up with.’

Originally from south London, Naomi established herself among the top three most recognisable and in-demand models of the late 1980s.

She has not aged! Cindy Crawford seen left on the catwalk at a presentation of Dolce And  Gabbana’s spring-summer collection in Milan in 1991. On the right, the star is seen in 2017 at the Daily Front Row’s 3rd Annual Fashion Los Angeles Awards 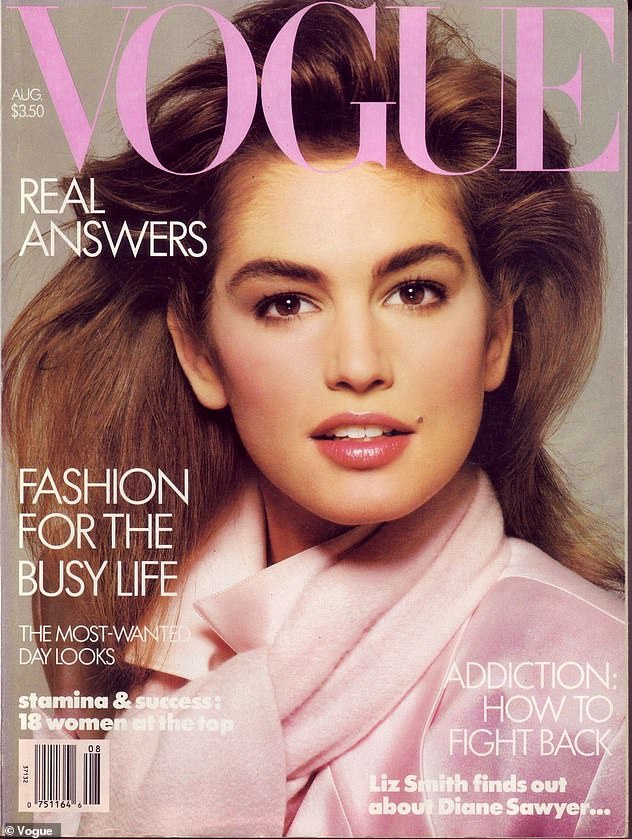 An instant classic: The Illinois native landed on the cover of Vogue dozens of times

Just before she turned 16, she was on the cover of British Elle and in 1987, she became British Vogue’s first black cover girl since 1966.

Meanwhile Cindy is said to have featured on around 500 magazine covers and walked for shows including Chanel, Dolce & Gabbana, Christian Dior, DKNY, and previously, Valentino.

The ladies, alongside fellow super models Claudia Schiffer, Helen Christensen and Carla Bruni reunited on the catwalk in 2017 for the Versace SS18 show at Milan Fashion Week. 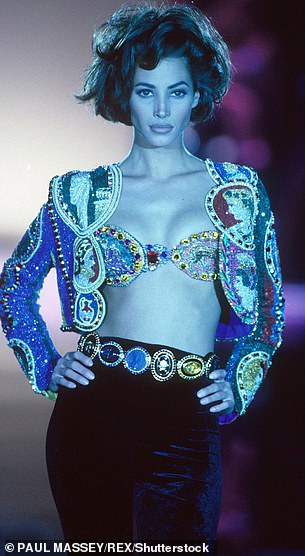 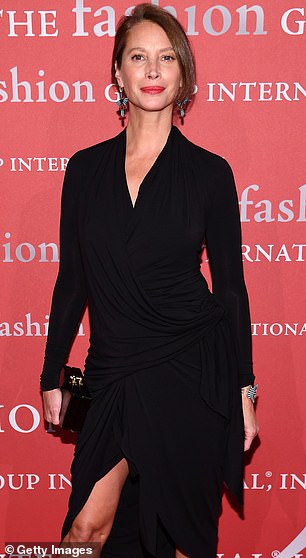 A dynamo always: Christy is seen on the runway in 1991, left, and at FGI Night Of Stars Gala at Cipriani Wall Street in NYC in 2019, right 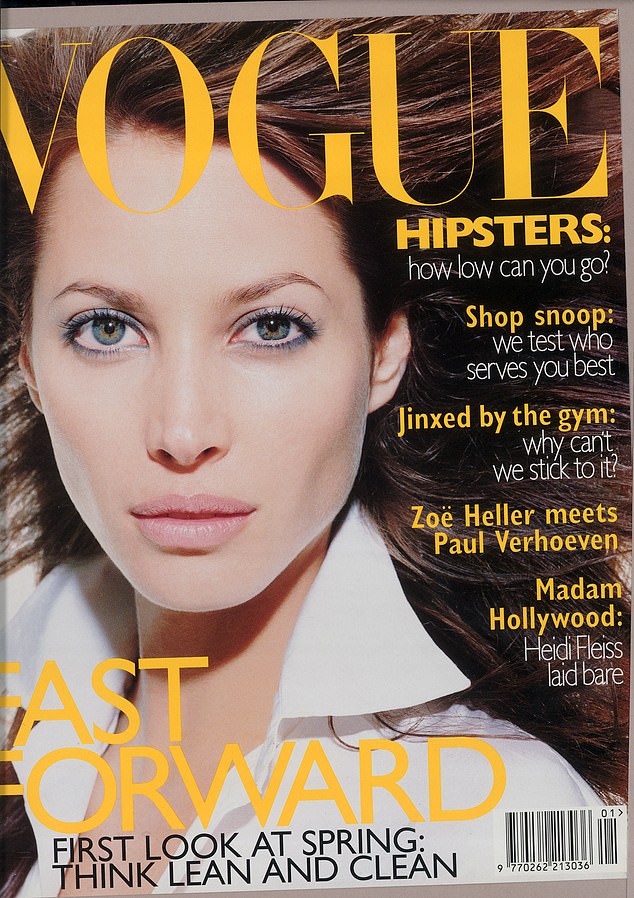 A favorite for healthy products: The San Francisco native landed on many magazine covers

Showing the young guns how it was done, fashion’s golden girls brought the show to a stunning climax, after it was opened by Kendall Jenner and model sisters Bella and Gigi Hadid.

The Nineties supermodels walked designer Donatella Versace down the runway to rapturous applause as they paid tribute to her late designer brother Gianni Versace, who was killed in 1997.

On the 20th anniversary of his death, it was a fitting tribute to a man with whom each of the women worked personally during their modelling days.

The women were all dressed in glittering gowns, proving that their supermodel figures were all looking impeccable into their late forties – and early fifties, for some at the time. 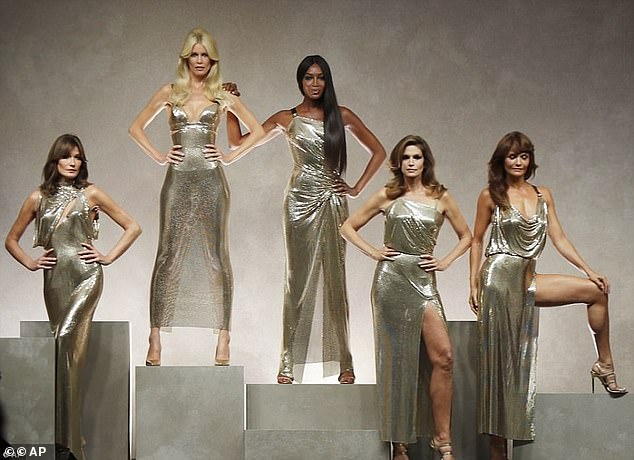 Together again: Naomi and Cindy, alongside fellow super models Claudia Schiffer, Helen Christensen and Carla Bruni reunited on the catwalk in 2017 for the Versace SS18 show at Milan Fashion Week 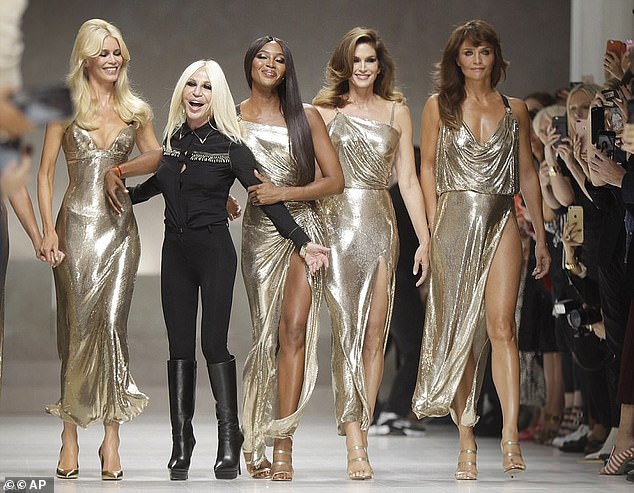 Stunning: The Nineties supermodels walked designer Donatella Versace down the runway to rapturous applause as they paid tribute to her late designer brother Gianni Versace, who was killed in 1997