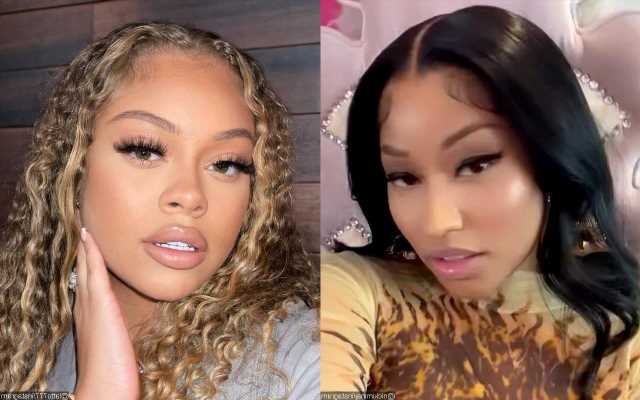 The Trinidadian raptress explains why she used the offensive term during social media war with the ‘Big Energy’ femcee after many assumed that she’s referring to the latter’s biracial heritage.

AceShowbiz –Nicki Minaj is explaining herself. The Trinidadian hip-hop star has defined the term “Karen” that she used amid heated social media exchanges with Latto (Mulatto), stemming from her complaints over the 2023 Grammy Awards nomination.

The feud between the rappers sparked several social media conversations about ageism, bullying and the use of the term “Karen.” Last week, Nicki called Latto “Karen” after the “Big Energy” hitmaker asked the Harajuku Barbie not to bring up her name to prove a point.

While many assumed that Nicki was referring to Latto’s biracial heritage when spewing the offensive term, the Harajuku Barbie went on Instagram Live with “Ultimate Rap League” star Nunu Nellz to clarify her use of the word. “Being a Karen is more about being manipulative and being passive-aggressive,” Nicki began.

Nicki went on to give a scenario about a white woman accusing a black man of something he did not do. “This is a great example if you think about it. [A person] knows that when that white police officer comes, he gone arrest that black man because there’s already a stereotype of the black man. So, she can easily pretend to be innocent and sweet in front of the cop because she knows that cop don’t like that black man either,” the “Anaconda” femcee explained.

While Nicki insisted that she was not speaking about “any specific person,” in her live session, she added, “If you knew you were lying on me, right, and then got me attacked while you played innocent, then that’s what a ‘Karen’ means.” She then concluded her message as saying, “Goodness gracious. [Her son] Papa Bear is two years old and he can understand that.”

Latto later responded, and the feud erupted, with both rappers sharing private DMs and hurling insults at each other. “This Karen has probably mentioned my name in over 100 interviews,” Nicki tweeted. “Says she waited in line for Pink Friday w|her Barbie chain on, bangs, pink hair…but today, scratch off decides to be silent; rather than speak up for the black woman she called her biggest inspiration.”

More recently, it’s unveiled that despite Nicki’s “Super Freaky Girl” not being listed in Rap categories, the “Super Bass” spitter’s name is “listed five times” in Rap categories. According to Variety, Nicki’s “Do We Have a Problem?”, which has a featured appearance from Lil Baby, is one of the songs placed in the rap category on the Grammy ballot, up for Best Rap Performance.