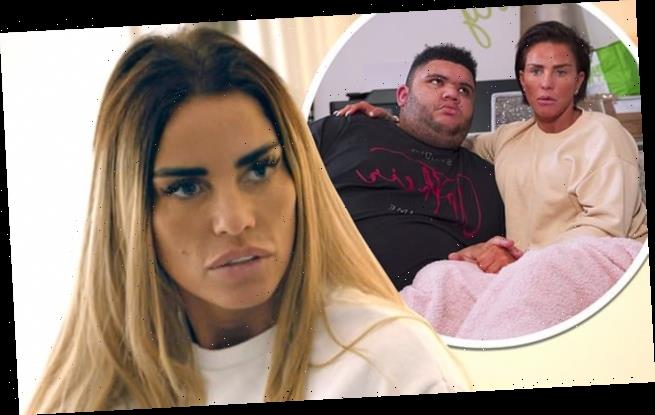 ‘This is disgusting’: Katie Price is left ‘upset’ and ‘outraged’ as website sells offensive merchandise featuring her son Harvey swearing

Katie Price is said to be ‘upset’ and ‘outraged’, after learning offensive fashion merchandise featuring her son Harvey using the C-word has gone on the market.

Face masks, T-shirts, stickers, and mugs have been offered for sale by American designer Corey Schroeder, showing disabled Harvey’s face next to the words, ‘Hello, you c**t’ – in reference to when he swore on ITV’s Loose Women in 2016.

Reacting to news of the vile products being put up for sale on marketplace website teerepublic.com, a source has told The Sun: ‘Katie is so upset, this is disgusting.’ 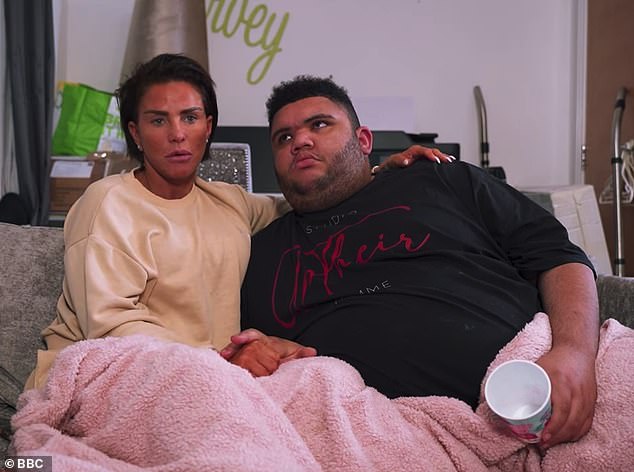 Shocking: Katie Price is said to be ‘upset’ and ‘outraged’, after learning offensive fashion merchandise featuring her son Harvey using the C-word has gone on the market

A spokesperson for the former glamour model, 42, said: ‘This is outrageous! Katie has not consented to having Harvey’s image used for this purpose. We have sent a notice requesting they desist immediately.’

Back in 2017, Ebay was forced to remove offensive merchandise, including T-shirts and mugs, mocking Harvey.

He appeared on ITV afternoon chat show Loose Women alongside his mother to talk about internet trolls.

Mother-of-five Katie asked Harvey how he would respond if someone said something horrible to him and he replied: ‘Hello, you c**t.’ 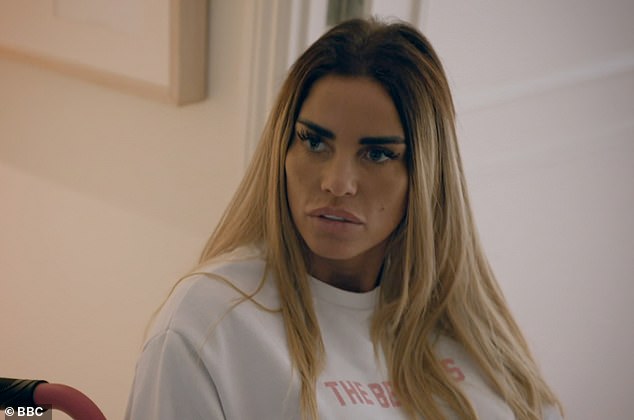 Upsetting: She was shocked to learn products had been offered for sale by American designer Corey Schroeder, showing disabled Harvey’s face next to the words ‘Hello, you c**t’

But conversely cruel social media users used the comments to poke fun at the disabled youngster.

An eBay rep said: ‘While we loved Harvey standing up to his bullies, unfortunately these items aren’t allowed on eBay because of offensive language printed on them. We have removed these items and we will contact the seller on this.’

When asked about his products, the seller, who went under the name rooby3333. said: ‘It depends which way you look at it at the end of the day.

‘He [Harvey] responded to a question regarding his haters and trolls, and I think he did a great job. As for being offensive, not at all.’

Katie launched an online petition in 2017 in a bid to make internet bullying a criminal offence, and make it mandatory for social media users to hand over their details in a bid to end anonymous abuse. 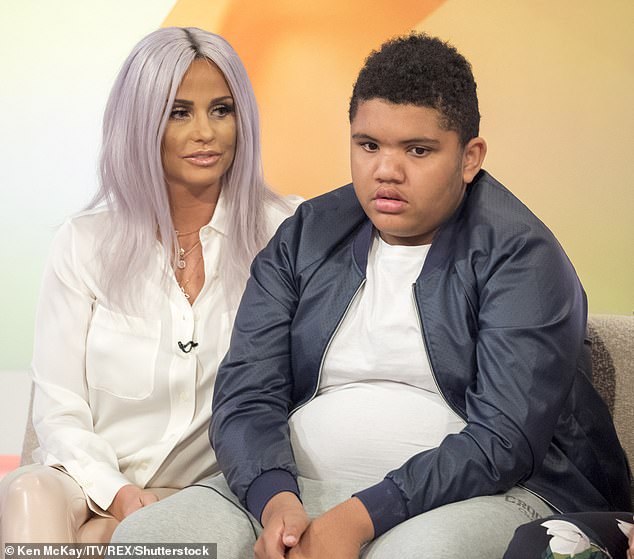 TV show: The products were inspired by Harvey swearing on ITV’s Loose Women back in 2016

TV personality Katie had previously spoken about some of the insults that had been directed at her son and made her determined to do all she can to stamp it out.

This week, Katie thanked fans for their support after an ‘overwhelming’ reaction to her documentary with son Harvey.

Harvey – who is on the autism spectrum and was born with disabilities including partial blindness, ADHD and Prader-Willi syndrome – brought viewers to tears when he appeared alongside his mother in the emotional Harvey And Me.

The former glamour model took to social media on Monday and said she had been ‘inundated’ with messages from parents ‘in a similar situation’ to her.

She wrote: ‘A message of thanks from us both…we have been overwhelmed by the amount of support Harvey, myself and my family have received since Harvey & Me aired last week. 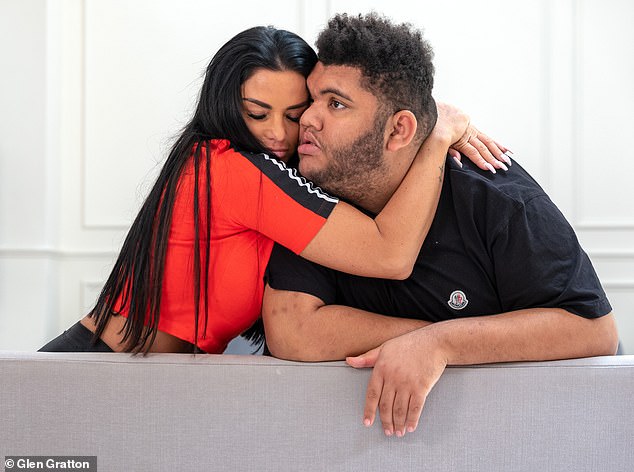 Thankful: Meanwhile, Katie has thanked fans for their support after an ‘overwhelming’ reaction to her documentary with son Harvey, 18

‘It’s been a comfort to hear I’m not alone and that many of you are experiencing the same – my team and I will continue to read through your emails and will respond in due course, so please do bare with us.

‘Autism, online trolling and the period of transitioning that many of…our young people are going through is something close to my heart, and I want to continue the conversation and support as many parents as possible. Thank you once again for all your continued support…end x’.

Harvey is reportedly in talks to film a second BBC documentary, as he moves out of his family home and embarks on a new life in residential college. 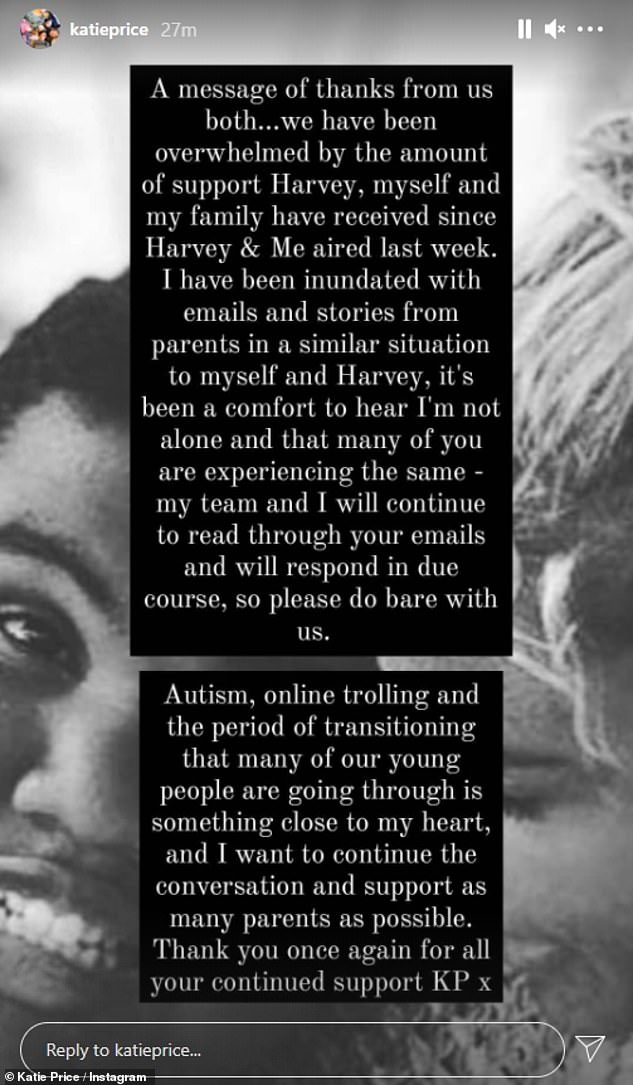 Message: The former glamour model took to social media on Monday and said she had been ‘inundated’ with messages from parents ‘in a similar situation’ to her

A source told The Sun: ‘Katie has agreed to a second instalment, which will follow Harvey’s journey as he starts residential college. They’re already in talks about what they’ll film and plan to start in summer.’

A spokesperson for Katie confirmed in a statement: ‘I can say with confidence there will be a part two of this wonderful documentary.

‘Katie has been inundated with requests for a follow up to cover the next steps in Harvey’s transition.’

Katie believes the move is vital for Harvey’s well-being because she can no longer restrain the at 6ft2in and 29 stone teen if he has a mood swing – and fears he could be sectioned if she doesn’t act now. 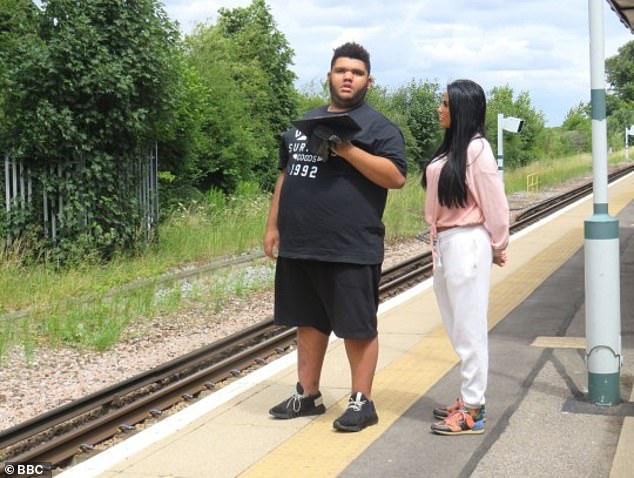 Emotional viewing: Harvey brought viewers to tears when he appeared alongside his mother Katie, 42, in the emotional Harvey And Me

In the days since the first documentary aired, Katie shared the sweet moment she told eldest son he was going to be a train announcer.

Katie uploaded a YouTube video showing her telling him he’d get to call out some of the trains on whatever route he liked, with the teen clearly delighted by the surprise.

In the video, Katie thanked fans for their overwhelming support since the documentary aired, and revealed to Harvey she had a surprise.

She said: ‘You know you went to the station with Zach? Lots of people saw you talk about trains.

‘The company, a station phoned mummy up and said would Harvey like to go to a station and do an announcement? 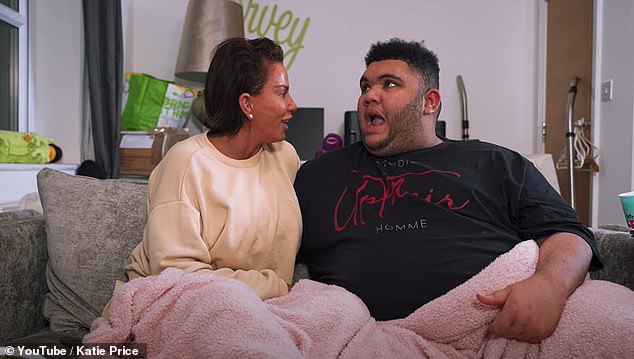 What a treat! On Friday, Katie shared the sweet moment she told son Harvey he was going to be a train announcer

‘Harvey would go: ”Can I have your attention please?” Would you like to do that and take Zach with you? What do you think? Are you excited?’

Thrilled by the surprise, Harvey said to Katie: ‘Yes, mummy,’ before giving a thumbs up to the camera.

The documentary saw Katie’s difficult task in finding a residential college for Harvey which wasn’t too far from home and in which her son felt comfortable in.

It also detailed her anguish at learning to let her son go as she worried whether he could cope without her.

At the forefront of everything was the emotional bond between Katie and Harvey, with the former glamour model clearly devoted to her son, while Harvey’s adoration of his mother was hard to miss. 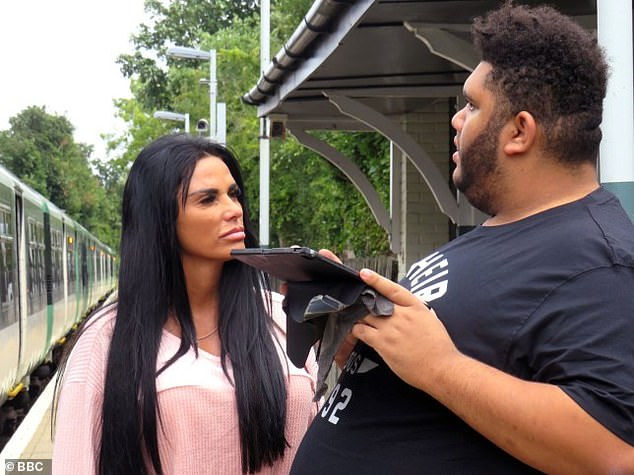 Emotional: The documentary saw Katie’s difficult task in finding a residential college for Harvey which wasn’t too far from home and in which her son felt comfortable in

WHAT IS PRADER-WILLI SYNDROME?

Other potential issues include learning difficulties, lack of sexual development and behavioral problems such as tantrums or stubbornness.

The rare condition, which affects one in every 15,000 children born in England, is caused by a defect on chromosome number 15 – and happens by chance.

Because there is no cure, treatment aims to manage the symptoms – with parents of sufferers urged to get their children to stick to a healthy, balanced diet.

Children with the syndrome can eat up to six times more than children of the same age – and still feel hungry.

It was first described in 1956 by Swiss doctors A Prader, A Labhart and H Willi.