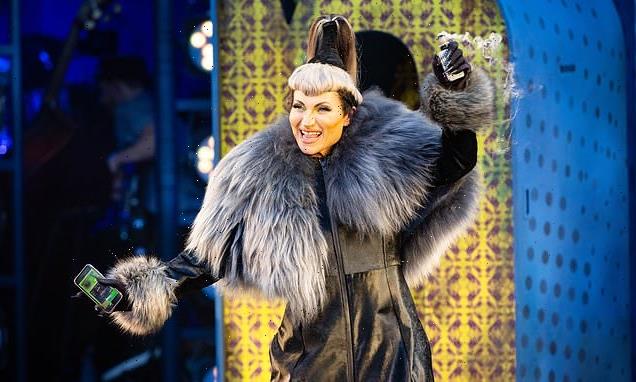 PATRICK MARMION: Puppet puppies are too cute to be worn by Cruella

We had a Disney animated film of Dodie Smith’s children’s classic in the 1960s; a live action movie starring Glenn Close as the villainous Ms de Vil in the 1990s; and last year, a spin-off (Cruella) starring Emma Stone.

But theatres have tended to avoid Smith’s much-loved story, mainly because of the problems posed by putting 101 canines on stage.

Now, though, the Open Air theatre have bitten the bullet (or should I say the trouser leg) and come up with a loveable mongrel of a musical, starring a deliciously deranged Kate Fleetwood as Cruella, and staged in the very park where the original story was set.

Zinnie Harris and Johnny McKnight’s somewhat worthy adaptation combines the bombast of panto, the mumsiness of CBeebies, the mischief of The Rocky Horror Show and, inevitably, the schmaltz of Walt Disney.

Even so, it’s a hard, Cruella-ish heart that would not warm to the cutesiness of Timothy Sheader’s dog-lovin’, family-friendly production. 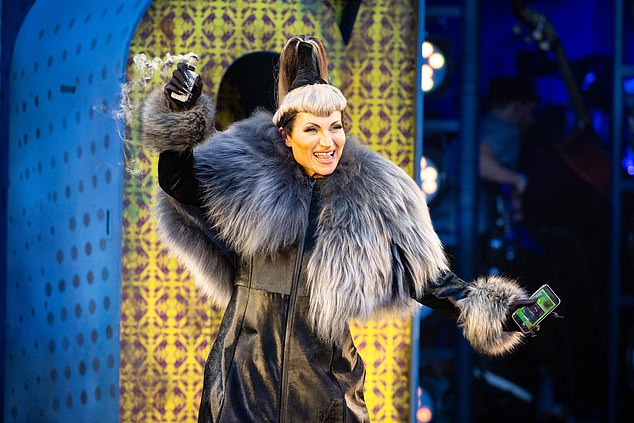 The Open Air theatre have bitten the bullet (or should I say the trouser leg) and come up with a loveable mongrel of a musical, starring a deliciously deranged Kate Fleetwood as Cruella, and staged in the very park where the original story was set

Its greatest innovation is solving the hound problem by using Toby Olié’s Dalmatian puppets — two of which spring (slightly weirdly, it has to be said) from the loins of the puppeteers. These big dogs, Pongo and Perdi, sniff each other’s bottoms, wind their leads about their owners, and turn round three times before they settle (a whole song is dedicated to this manoeuvre).

The puppies, meanwhile, are played by small children bearing big-eyed, floppy-eared puppet heads; while other bit-part dogs that help free them later include Dobermans dressed as security guards, a poodle in a tutu and boxers . . . with boxing glove ears.

Fleetwood’s jaunty Cruella is a hard-boiled Essex girl and social media influencer who insists ‘no one makes a mug out of me — unless it’s official merchandise’.

Her flunkies Jasper and Casper (George Bukhari and Jonny Weldon) are subject to a slightly grim running gag about losing their mother under a train. And the writers should have had more fun with Pongo and Perdi’s owners, who unlike the debonair Dearlys of the book are a couple of hard-up, co-habiting deadbeats.

Douglas Hodge’s music and lyrics can be hard to follow — and at times, to hear. There is a prog-rock rap called Dogtra; a Cockney knees-up (Two Bad Criminals); and a mandatory mushy number for the puppy who almost doesn’t make the great escape, All Of Our Kisses. 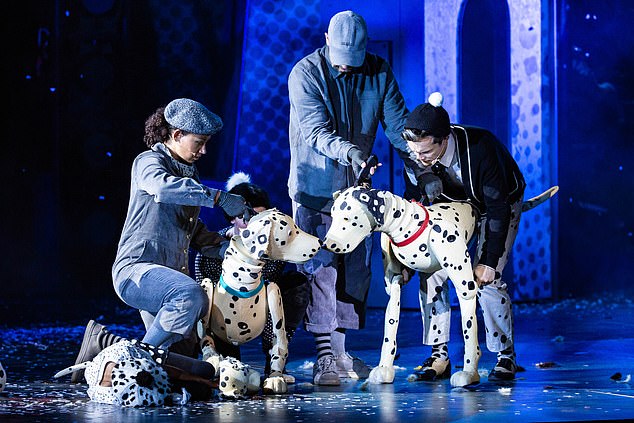 The puppies, meanwhile, are played by small children bearing big-eyed, floppy-eared puppet heads; while other bit-part dogs that help free them later include Dobermans dressed as security guards, a poodle in a tutu and boxers . . . with boxing glove ears

As usual, the de Vil has all the best tunes and Fleetwood has a blast with everything from a Kurt Weill-ish jazz intro (It’s My Treat) to a Shirley Bassey-style belter, I Can Smell Puppy.

Most likely to be enjoyed by dog lovers and the younger end of the family, but still a big, soppy mutt of a show that’s not to be sniffed at.

Could it be that Bad Jews is being mis-sold as comedy, when in fact it’s something much more profound? The show, about three Jewish grandchildren in New York fighting over a family heirloom, has been knocking around since 2015. It looks like a Neil Simon comedy, but works better as an Arthur Miller-ish moral dilemma.

The players are Daphna (Rosie Yadid), who is highly invested in her Jewish heritage and planning to move to Israel; and her cousins: Liam (Ashley Margolis), who doesn’t take religion seriously, and his brother Jonah (Charlie Beaven), a mousy peacemaker who’ll agree to anything for a quiet life.

The object under dispute is a necklace owned by their recently deceased grandfather, who kept it safe through the Holocaust.

To start with, Daphna seems a bit of a drone. But the question she raises about what we will be left with, if we fail to re-invent the traditions of our ancestors, is urgent and challenging.

Writer Joshua Harmon clearly believes his play has a comedic soul. Laughter, though, doesn’t always prosper in the silences that run through Jon Pashley’s production.

Yet gradually, I began to sense there was something bigger at stake — and that it would take the judgment of Solomon to determine which cousin should get the necklace.

Billy still has the power to move us to tears

Stephen Daldry’s award-winning 2000 film (written by Lee Hall), about a boy from a Geordie mining village who discovers a talent for ballet, later became a hit West End musical, with music by Sir Elton John.

The show, set against the events of the 1984-5 miners’ strike, has now been reimagined to great effect by director Nikolai Foster and choreographer Lucy Hind.

It’s fair to say that Sir Elton’s finest work lies elsewhere, but Mr Hall’s deeply humane writing carries the show, which is about loss and grief — for Billy, it’s for his dead mam; and for Easington’s men, their livelihood — and the importance of community.

Mr Hall’s naturalistic writing often utilises fruity (but very funny) language, but there’s little to really offend. The use of the word ‘poof’, for example, merely serves to place events in the time and macho world Billy lives in. 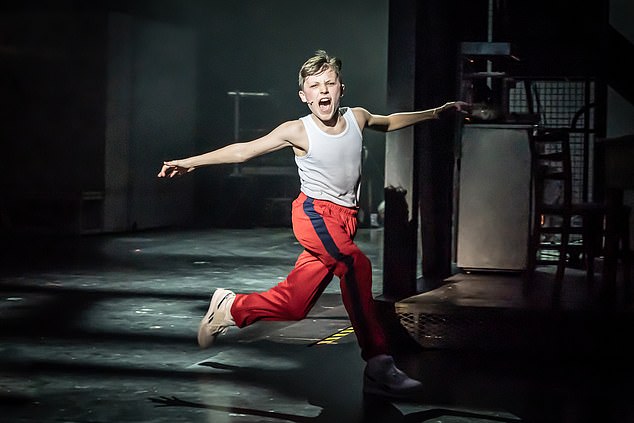 The show, set against the events of the 1984-5 miners’ strike, has now been reimagined to great effect by director Nikolai Foster and choreographer Lucy Hind

His father, Jackie (Joe Caffrey) is angry when he finds out Billy has abandoned a boxing club for ballet lessons given by Mrs Wilkinson (Sally Ann Triplett on superb form), who recognises his talent.

Eventually, love and acceptance overcome entrenched attitudes as Jackie — and his fellow miners — support Billy as he auditions for the Royal Ballet School.

There are catch-in-the-throat moments; when Mrs Wilkinson reads out the letter Billy’s mam wrote to him before she died (The Letter) and when the defeated miners go back to work behind their union banner (Once We Were Kings) stand out. Michael Taylor’s set (with lighting by Ben Cracknell) brilliantly utilises the Curve’s large stage, the moveable chainlink fences acting as both real and metaphorical barriers as the miners come into conflict with the police and Billy with his dad.

The pulsating band are under the direction of George Dyer, while among a large cast the young principals on press night — Jaden Shentall-Lee as Billy and Prem Masani as his best friend Michael — are terrific.

Opera buffs label Donizetti’s comic opera Don Pasquale a ‘starter opera’. If that means uncomplicated, easily digested, filled with lovely melodies — and short — then so it is.

If they mean that it is bland, puréed baby food, it is not. It is a hot, passion-fruit soufflé which, when it rises, is as light as air, exquisitely combining sweetness and sharpness. But only if cooked to perfection. It appears effortless, but requires talent as well as a good recipe.

Director Mariame Clément has both in spades, for this is the sixth revival of her 2011 production. I shall take the word of my esteemed opera critic colleague that it has never been so sensationally well sung.

Her staging is spectacular. During the overture, the stage revolves while mischievous Malatesta (Huw Montague Rendall), the story’s fixer, swoops through paintings and wardrobes from one sleeping character’s room to the next, to illustrate how he will inveigle his way into their lives for his own amusement; and to force deluded old dog Don Pasquale to keep his breeches on. 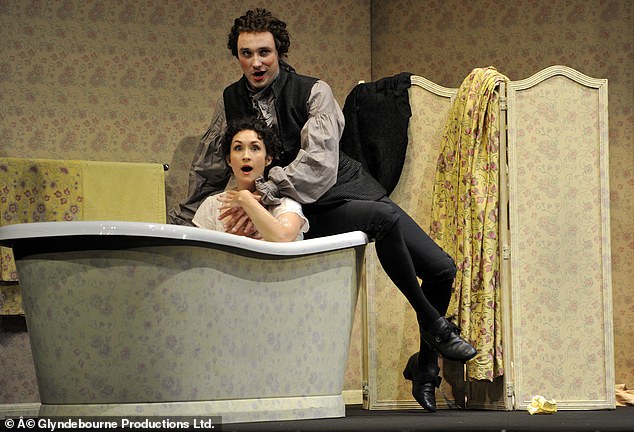 Opera buffs label Donizetti’s comic opera Don Pasquale a ‘starter opera’. If that means uncomplicated, easily digested, filled with lovely melodies — and short — then so it is

For the moral of this tale, as Erin Morley’s charmingly coquettish Norina reminds us, is that ‘Marriage in old age is for fools’, prompting the evening’s biggest laugh.

But in a clever twist, having sorted Norina’s marriage to Don Pasquale’s drippy nephew Ernesto (a splendid Glyndebourne debut by Luca Bernard), Malatesta’s intimacy with Norina suggests an ongoing affair. Their shared bubble bath, as they frothily plot their next move, will not be their last.

Playfulness is the order of the day. A letter arrives in the beak of a bird, dropped from above; a superbly drilled chorus of fops, all a whiter shade of pale, provide a gossipy commentary. There’s also unexpected poignancy, best of all Ernesto’s solo to the tune of a trumpet.