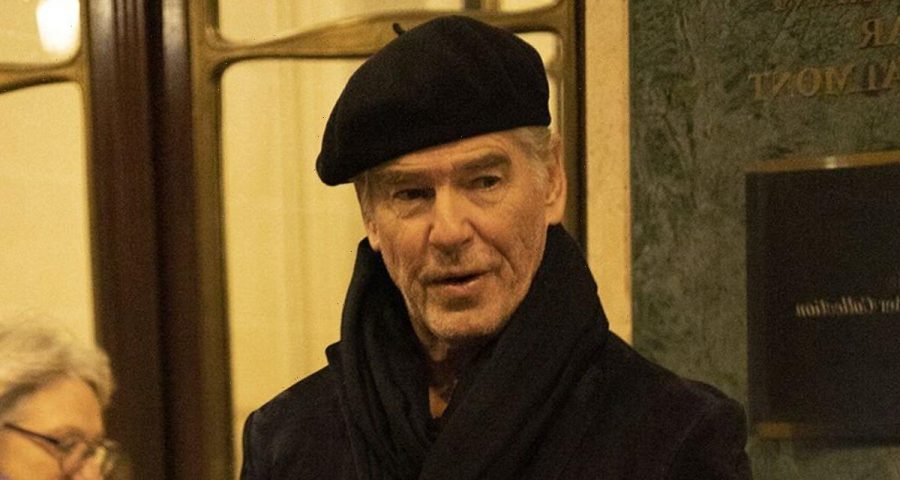 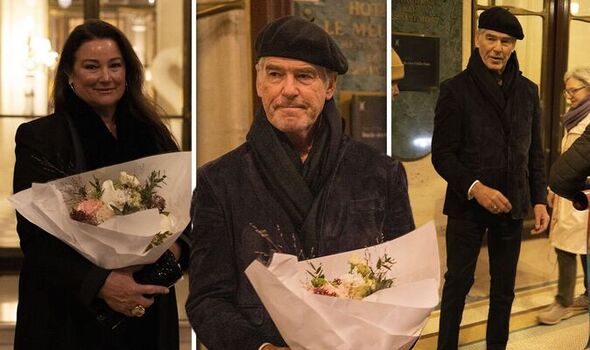 Pierce Brosnan, 69, wrapped up for the cold weather as he stepped out of his Paris hotel last night alongside his wife Keely Shaye Smith, 59.

Pierce Brosnan, 69, wrapped up warm for the winter as he layered up to face the cold Paris evening alongside his wife Keely Shaye Smith, 59.

The James Bond actor layered up in all-black, including black tailored trousers, smart brown shoes along with a textured jacket and a dark scarf underneath.

Keeping his head warm and keeping with the Paris theme, Pierce opted for a beret.

Meanwhile, Keely kept the colour theme going as she sported a longline blazer, paired with a sparkly black dress.

The couple seemed to be leaving their hotel for a spot of dinner when they were greeted by fans, with one giving the pair a large bunch of flowers.

Pierce Brosnan accepted flowers from fans as he exited the hotel

Pierce Brosnan wrapped up warm in Paris as he stepped out in an all-black ensemble, while also accepting a lovely bouquet of flowers from a fan.

Pierce Brosnan was joined by his wife Keely

Pierce Brosnan went for a casual all-black ensemble which included tailored trousers, a black textured jacket, as well as layering up with a black scarf and beret.

Pierce Brosnan’s wife Keely showed off her sense of fashion as she sported a longline blazer over a glitzy black dress, emblazoned with sequins. She let her brunette locks fall freely, while also showing off her natural complexion with minimal make-up.

Pierce Brosnan and Keely looked smitten during their Paris trip

Pierce Brosnan and his wife Keely Shaye Smith are often based in Hawaii, but have been enjoying a Paris getaway this week. It also appears that the smitten pair have been enjoying a trip travelling Europe over the last few weeks as they were pictured on a romantic break in Italy’s Lake Como last week.

Pierce Brosnan and Keely have been married for 20 years

Pierce Brosnan and Keely Shaye Smith exchanged vows in Ireland in August 2001, with the couple celebrating 20 years of marriage in the summer. The couple met at a party in 1994 after the death of Pierce’s first wife Cassandra Harris in 1991, and hit it off before eventually deciding to tie the knot seven years later.