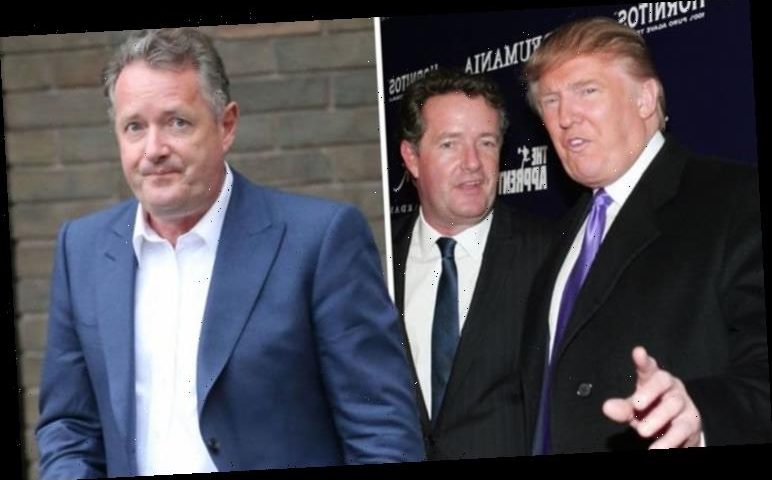 Good Morning Britain host Piers Morgan recently called for the resignation of Donald Trump after his supporters stormed the Washington DC’s Capitol Building which has resulted in four deaths. The broadcaster addressed a viewer who questioned if he had plans to reunite with the Commander-in-Chief for a TV appearance.

The 55-year-old unleashed his fury on the US President as a result of the chaos which erupted at the “Save America” rally yesterday.

Taking to Twitter, Piers was quizzed on whether he would speak with Trump face-to-face on his ITV show Life Stories.

The British television show gives viewers an in-depth insight into the life of a celebrity guest.

But the GMB presenter shut down any plans to interview Trump on his self-titled programme. 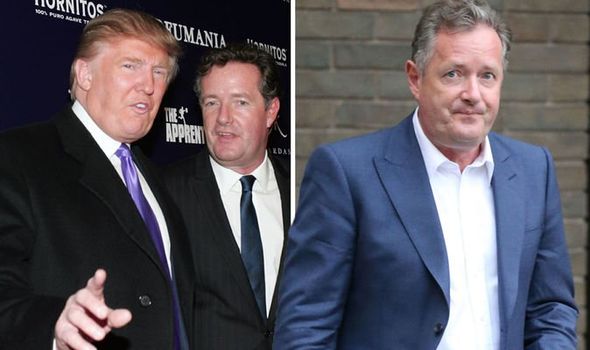 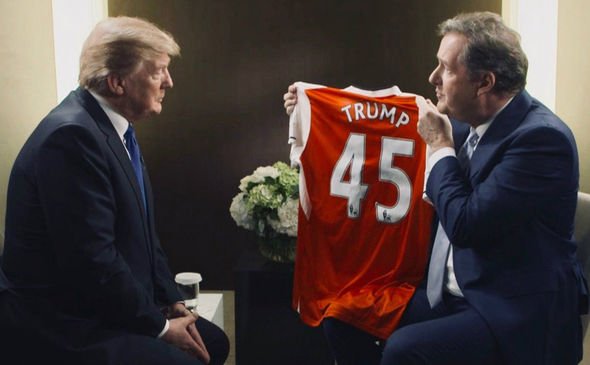 A social media user remarked: “Get him on Life Stories.”

Piers revealed that ITV had turned down Trump after he agreed to do his show.

“Interesting fact: ITV once turned down Trump for Life Stories when he agreed to do it,” the GMB host remarked in view of his 7.7 million followers.

Piers appears to have finally severed ties with Trump – after saying he considered him a “close friend” during the US election in November. 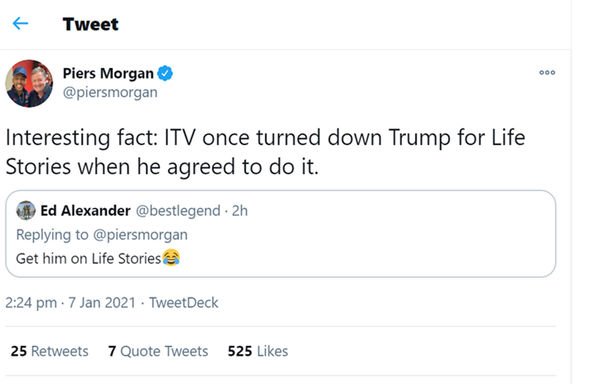 Back in 2018, the broadcaster presented President Trump – The Piers Morgan Interview for ITV where the pair shared an in-depth conversation.

The GMB host has since condemned the US President following the events which unfolded at the Capitol Building.

The outspoken presenter reacted to a tweet from Trump during the carnage that asked for “everyone at the US Capitol to remain peaceful. No violence! Remember, WE are the party of Law & Order – respect the Law and our great men and women in Blue. Thank you!” 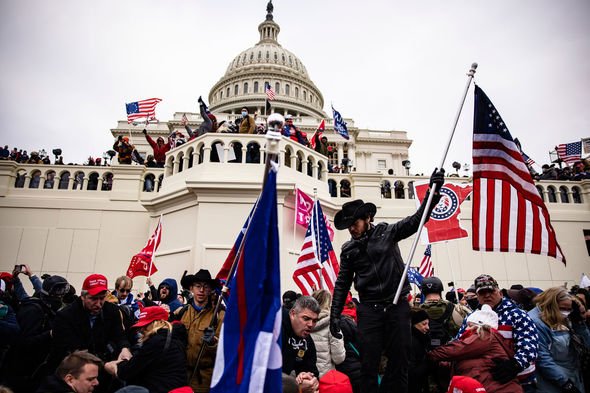 “A woman’s been shot in this carnage and it’s all on you. This is not reality TV, this is real life.

“Get on TV now, admit you lost the election, & call off this insanity. And then get out of the White House.”

In a follow-up tweet, the Good Morning Britain host added: “President Trump must be removed from office with immediate effect.”

Supporters of Trump stormed the US Capitol building blocking a vote certifying Joe Biden’s US election victory on November 3.

Politicians were forced to evacuate after supporters flooded the building and attempted to reach lawmakers.

Piers and Trump had previously been on good terms but the former has been critical of the US President – most recently being his handling of the coronavirus pandemic.

During an appearance on This Morning, Piers said that Trump picked up the phone to call after seeing him on a US TV programme – which he said led to a two and a half-hour long conversation.

“He knows how critical I’ve been about the coronavirus,” Piers said.

“I called him out, and I said you should start refollowing me on Twitter because he unfollowed me when I told him to shut the bleep up about coronavirus… and it all got pretty unpleasant.”

He added: “But he saw me talk about it and he called me up, and you know I still consider him to be a friend, I’ve known him a long time.”