Babies on the mind. Priyanka Chopra Jonas says she will tell her future children with husband Nick Jonas about the time the couple first met at the 2017 Met Gala.

The 36-year-old Quantico alum shared the revelation via her Instagram Story on Sunday, May 5,  before the annual Anna Wintour-hosted fashion affair in New York City on Monday. Her declaration was accompanied by an old picture of the actress and musician as they attended the Met Gala together two years ago.

“I’ll definitely tell our future kids…,” Chopra Jonas began to write, adding in a second Instagram Story post, “How I met your father.” 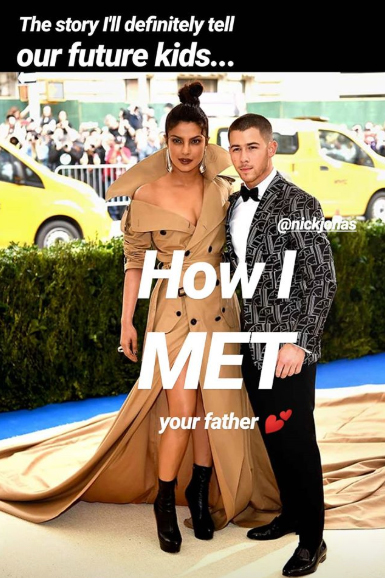 Jonas, 26, accompanied his now-wife to her first-ever Met Gala. At the time of their meeting, she was wearing a custom trench coat gown by Ralph Lauren. The UglyDolls actor was also wearing the designer.

The pair wouldn’t start dating until a year later. The “Sucker” singer popped the question that July and they tied the knot in multiple lavish ceremonies in India in December 2018.

“Yeah, we were on the same table and we already know each other. So he was like ‘Hey, you wanna go together?’ And I was like, ‘Yeah, OK, let’s go together,’” Chopra Jonas later recalled to Jimmy Kimmel. “It ended up working out.”

The Jonas Brother member shared with Extra in April that the couple was in no rush starting a family. A source, however, told Us Weekly in October 2018 the Isn’t it Romantic star and Camp Rock alum would begin trying for kids after their wedding. Before their nuptials, they told Us they are “talking about starting a family together.”

“Nick and Priyanka can’t wait to get married. They have amazing chemistry and can’t wait to have kids,” the source explained. “They are going to wait until after the wedding to start trying. But it’s definitely on the agenda.”