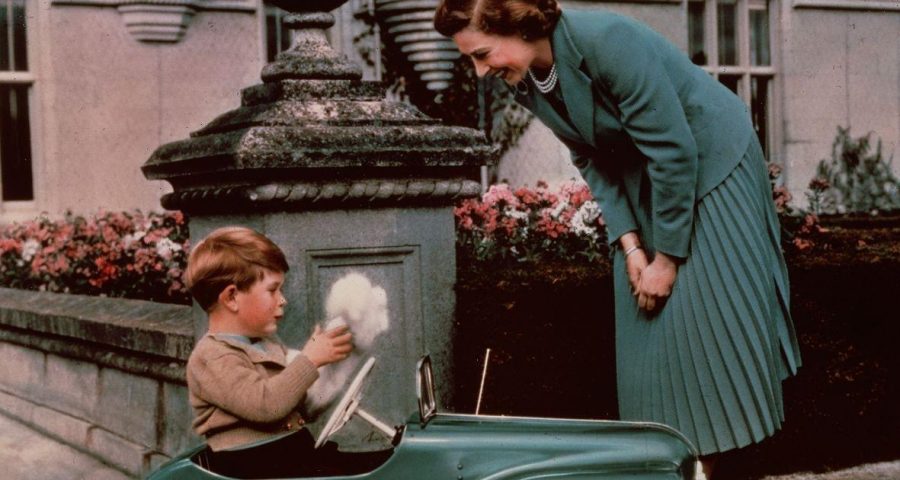 Queen Elizabeth II was the ultimate matriarch whose extended family meant the world to her.

The first of her and Prince Philip’s four children, Charles, was born at Buckingham Palace in November 1948 when she was a 22-year-old princess and four years before she became Queen.

News of the prince’s birth was broken with a traditional notice pinned to the railings outside the palace, where waiting crowds burst into a rendition of For He’s A Jolly Good Fellow. The water in the Trafalgar Square fountains was dyed blue to celebrate his arrival.

The princess appeared to adapt to motherhood quickly, although two weeks after her firstborn came along, she wrote in her diary, “I still find it hard to believe that I really have a baby of my own.”

The couple’s daughter Princess Anne was born at Clarence House in August 1950, and Elizabeth wrote in a letter that Charles treated his new baby sister “with great care”.

After her ascension to the throne in 1952, the Queen was focused on establishing her legacy as monarch. It was another decade before Prince Andrew came into the world at Buckingham Palace in February 1960, with the Queen revealing to her private secretary Martin Charteris that she and Philip had been trying for another baby “for some time”.

As with all her children, maternity leave was out of the question, and within 48 hours of giving birth she was asking which official papers needed to be dealt with.

The Queen’s fourth child, Prince Edward, was born at Buckingham Palace in March 1964, when she was nearly 38. Soon after his birth, she commented, “Goodness, what fun it is to have a baby in the house again!”.

Juggling her state role with motherhood was never easy – especially in the early days, when she was thrust prematurely into royal duty after her father King George VI fell seriously ill.

But in spite of her punishing schedule, she was known to keep her youngest offspring as close to her as possible, and they would often sleep in a mahogany crib in her office while she worked.

While her workload sometimes inevitably eclipsed her children’s needs, her priorities appeared to shift after the arrival of her two youngest sons. In fact, when Andrew and Edward were little, she began cutting short official engagements and postponing tours, choosing instead to spend more time with them in the Buckingham Palace nursery.

Even though nannies were a permanent presence, the Queen’s cousin Margaret Rhodes told how Elizabeth liked being “mummy” to her children whenever she could.

“The Queen would take them away to Balmoral and she would get them to make their own beds and help with the washing-up. She cooked the supper – they loved bangers and hot spuds. These were magical times, full of fun and love.”

A film released to tie in with the Queen’s 90th birthday in April 2016 provided evidence of this, with archive footage showing the family messing about at their beloved Scottish estate. Much of it was shot on cine film by the beaming Queen herself, and showed the children joyfully rolling down grass banks and zooming around in toy cars.

The Queen adored being a mother – a fact she made clear when she presented actress Kate Winslet with her CBE in 2012. Asked if she enjoyed her Hollywood job, Kate replied that she did, but added, “I love being a mum even more.”

The Queen agreed, responding, “Yes. That’s the only job which matters.”

In her later years, she endeavoured to see her children as often as possible, and would meet Andrew most Sunday mornings after church at his home in Windsor Great Park. In the afternoons, she liked to have tea with Edward and his family at Bagshot Park, just 10 miles away.

She also remained close to Anne, who shared her interest in horses and fashion. Their bond was further strengthened when Charles’ marriage to Diana, Princess of Wales, began to fall apart in the early 1990s, with mother and daughter reportedly phoning each other daily.

A royal courtier later revealed, “Anne was the main one holding her mother together during the crisis.”

Anne always spoke warmly of her mother, and leapt to her defence after Charles suggested in his authorised 1994 biography that the Queen was “remote”’ while they were growing up. “I don’t believe any of us for a second thought that she didn’t care for us in exactly the same way as any other mother did,” she insisted.

A special photo to mark her 90th birthday showed the Queen sitting close to Anne, who had her arm protectively around her mother’s shoulders. The milestone gave the whole family a chance to publicly celebrate their mother’s extraordinary achievements, and the tributes were led by Charles, who said, “When you think that all these years the Queen has been on the throne, that in itself is a huge achievement – coping with so many different challenges and complications and always being there, really, in that remarkable way.”

Her grandson, Prince William, joined in the tributes, revealing she had been a consistently strong female influence in his own life. “Having lost my mother at a young age, it’s been particularly important to me that I’ve had somebody like the Queen to look up to, and who’s been there and who has understood some of the more complex issues when you lose a loved one,” he said, adding that she had been “the most incredible grandmother”.

William told a childhood anecdote about himself and his cousins, Peter Phillips and Zara Tindall, getting into trouble at Balmoral. “We were chasing Zara around, who was on a go-kart, and Peter and I managed to herd Zara into a lamppost. It came down and nearly squashed her, and I remember my grandmother being the first person out at Balmoral running across the lawn in her kilt!

"[She] came charging over and gave us the most almighty b*****king!

“There were moments when she loved the noise, but there were others where I think she wanted to smack us over the head and tell the naughty children to go next door!”

Prince William said she had relished being a great-grandmother, too. “She likes to keep an eye on them – particularly Charlotte,” he revealed. “She’s fascinated by what Charlotte gets up to.”

His wife, Kate, who gave birth to their third child, Prince Louis, on April 23, 2018, told how the Queen would always spoil Princess Charlotte and her older brother Prince George. “She always leaves a little gift or something in their room when we go and stay, and that just shows her love for her family,” she said.

Touchingly, she also revealed that George had referred to the Queen as “Gan-Gan”.

Prince Harry, who gave the Queen her great-grandchildren Archie and Lilibet, admitted he saw her first and foremost as supreme matriarch. “I still view her more as the Queen than my grandmother,” he said at the time. “You have this huge amount of respect for your boss and I always view her as my boss, but occasionally as a grandmother.”

He added, “I think she should be incredibly proud of what she’s led and what she’s created.”

Meanwhile, Princess Beatrice and her sister Princess Eugenie were said to have doted on the Queen. Beatrice proudly once called her “such a timeless figure”.

The siblings are now mothers themselves. Eugenie’s son, August, was born in February 2021, while Beatrice gave birth to her daughter, Sienna, last September.

Younger family members often featured in family portraits with the Queen. In a shot taken by the Duchess of Cornwall and Cambridge and released shortly after Prince Philip’s death, the Queen can be seen sitting with a baby Prince Louis on her lap, with Princess Charlotte in prime position between her great-grandmother and great-grandfather, Prince Philip.

Also in the photo are Louis and Charlotte’s big brother, Prince George, Peter and Autumn Philip’s daughters Savannah and Isla Philips as well as Lena and Mia Tindall, daughters of Zara and Mike Tindall.

A Queen’s 90th birthday picture showed the Queen posing with the next three in line to the throne; Charles, William and toddler George, who stood grinning cheekily on a pile of foam blocks. The picture marked the first time since 1894 that three generations of direct heirs had been alive at the same time.

Of course, the Queen and her extended brood experienced plenty of bumps in the road over the years, and she herself said in October 1989, “Like all the best families, we have our share of eccentricities, of impetuous and wayward youngsters and of family disagreements.”

But she evidently adored her four children, eight grandchildren and 12 great-grandchildren, and they looked up to her with awe and deep affection in their turn.

There can be little doubt that the entire royal family will greatly miss the Queen in the years to come.

This week, OK! celebrates the life of Her Majesty the Queen with a commemorative special in honour of Britain’s longest reigning monarch. Be sure to pick up your copy.