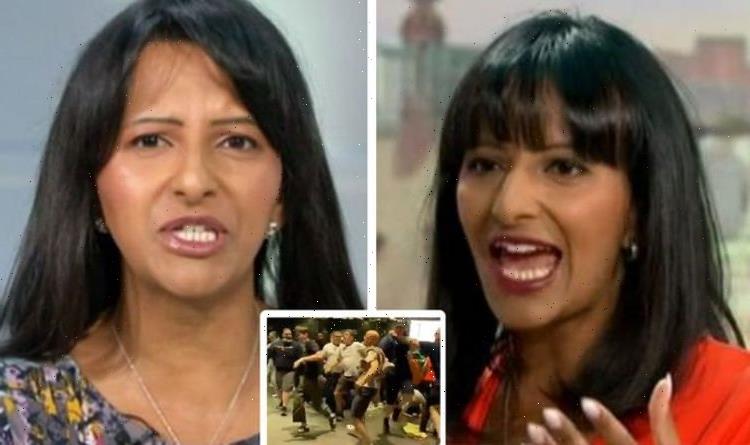 Following England’s defeat against Italy during the Euro 2020 tournament, videos began to surface of football fans becoming violent at bars and pubs across the country. At Wembley itself, thugs were filmed attacking others as they tried to leave the stadium, with one man caught on camera punching a child in the head as he tried to escape the mayhem.

Among those condemning the reaction to the result was Good Morning Britain star Ranvir Singh, who encouraged her followers to report anyone they knew in the video to the police immediately.

After coming across the footage of the carnage on Twitter, she reposted it to her own page to share her anger.

“This is NOT what England stands for,” she began.

“Disgusting – please report anyone you recognise to the police.”

Fans rushed to the comments section to slam those involved, with one writing: “Don’t think I would ever want to take my kids to a football match!”

Another urged the Home Secretary to take action: “Prison if caught no more slaps on the wrist by the courts @pritipatel.”

A fourth sighed: “There are always a minority wanting to cause havoc. Absolutely shocking!”

“This is shameful a complete disgrace. Why are the English such poor losers?” a fifth condemned

“Did the players start fighting on the pitch after the match? Sickening behaviour?”

While a sixth slammed: “Ok so all the f***ing idiots who believe this is acceptable are getting a knock on their doors this morning? What a way to end their ‘history making tournament’ nothing like loosing gracefully. Thugs!”

It comes after the Three Lions came so close to winning a major championship for the first time in 55 years.

There were around 60,000 fans in attendance at Wembley watching the tense match along with millions tuning in from home, pubs and fan zones across the nation.

Familiar faces in the crowds included the Duke and Duchess of Cambridge and Prince George.

David Beckham was seen fist-bumping Tom Cruise after England’s first and only goal at the beginning of the match.

Sadly, while the game started off on a high note for England after Luke Shaw scored in the second minute, dreams came crashing down as Rashford, Sancho and Saka missed in the penalty shootout, giving Italy the title.

Millions took to social media to pen their support for the team following their loss, applauding them for getting so far in the tournament and hoping for a better outcome in the next World Cup.