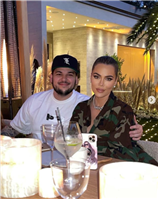 Rob Kardashian has had endured many, many ups and downs over the course of his tumultuous career.

Actually, come to think of it, the downs have been plentiful, but the ups have been in short supply.

Of course, it’s tough to feel bad for the guy, as he brings most of this misfortune on himself.

These days, Rob spends a lot of time in seclusion — by which we mean he doesn’t use social media or arrange paparazzi run-ins before he leaves the house.

This might be a brilliant PR move, because on those rare occasions when Rob does make an appearance on Instagram, fans act like it’s some sort of major event.

These days, Rob very rarely posts his own pics, but his famous sisters occasionally share a photo, seemingly just to remind the world that he exists.

This time it was Kim’s turn, and she shared the photo above along with a caption that we really could’ve done without.

“Dinner with my fave couples,” Kim wrote alongside the photo.

She was referring to the fact that she was playing fifth wheel that night, as she was also joined by Travis Barker and Kourtney Kardashian.

Yeah, we know Kim was joking, but given this family’s long history of not knowing where to draw the line in terms of semi-incestuous behavior, maybe she should’ve joked about … well, literally anything else.

Anyway, it’s been a long time since we’ve had an update about Kris Jenner’s only son.

We know that Rob is dating again following his very messy split from Blac Chyna, but he must be doing so in out-of-the-way places, because he hasn’t been spotted by the paps at any point in the past year.

As you can tell from the pic, Rob has shed a good amount of weight recently, and fans were quick to praise him for remaining committed to his health and fitness.

That’s nice and all, but we always feel a little conflicted whenever Rob makes one of these mini-comebacks.

Yeah, he’s a troubled guy who’s been through some stuff … but it’s important to remember that Rob has been credibly accused of some truly atrocious acts.

Let’s not forget that this dude allegedly pointed a gun at Blac Chyna, among other many other shocking acts of abuse.

But while it’s tough to fully support Rob, we’re always fans of personal growth, and it’s important to remember that Rob and Blac have a child to raise.

“He wants to be the best dad possible and doesn’t want to let her down. It has helped him find a pathway forward and a purpose,” a source recently told E! News when asked about Rob’s progress.

“He loves being able to spend time with Dream and seeing her with her cousins. He spends a lot of the time with the family and the kids, and he’s been around a lot more.”

Yes, it’s good news that Rob is showing up for the younger generation — but maybe he should take a little more time before he jumps into another serious relationship.