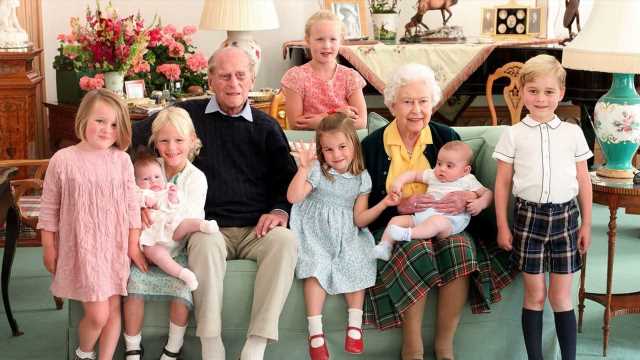 Prince Philip’s long life is being celebrated by his family after he passed on April 9 at 99 years old.

Members of the British royal family took to social media on Wednesday and shared never-before-seen photos of the Duke of Edinburgh with his children and many great-grandchildren.

Prince Philip and Queen Elizabeth II had four children, eight grandchildren, and 10 great-grandchildren at the time of his death plus one on the way since Meghan Markle is expecting a daughter this summer.

The royal family’s official Twitter handle shared a photo taken in 2018 at Balmoral Castle in Scotland by Kate Middleton, the Duchess of Cambridge.

The image shows Prince Louis, who was just a few months old at the time, on the Queen’s lap, with siblings, Princess Charlotte and Prince George, posing next to him.

Meanwhile, Prince Philip is cradling Isla Phillips, who is holding her little cousin Lena Tindall and big sister Mia Tindall is next to them. Eldest great-grandchild Savannah Phillips is standing behind the couch.

Prince William and Middleton shared another image taken at Balmoral in 2015 which featured a toddler Prince George and a baby Princess Charlotte.

Prince Charles honored his late father with a black-and-white photo from 1966 of the pair playing polo and a second photo of Prince Philip with Charles and his wife Camilla, Duchess of Cornwall, at Prince William and Kate’s wedding in 2011.

A second tweet from the royal family account also showed two new photos of Prince Harry with Prince Philip at a formal event and Princess Eugenie and Princess Beatrice with their grandfather.

Prince Philip’s funeral will take place Saturday at Windsor Castle, with attendance limited to 30 because of coronavirus restrictions.

Although it is a scaled-down service because of the pandemic, hundreds of servicemen and women from the Royal Navy, Royal Marines, Army and Royal Air Force will take part in the funeral procession, and Philip’s coffin will be borne to St. George’s Chapel at the castle on a specially adapted Land Rover, which he designed himself.

One of four Royal Marines buglers who will play “The Last Post” at the service said it was an “honor and privilege” to perform the role.