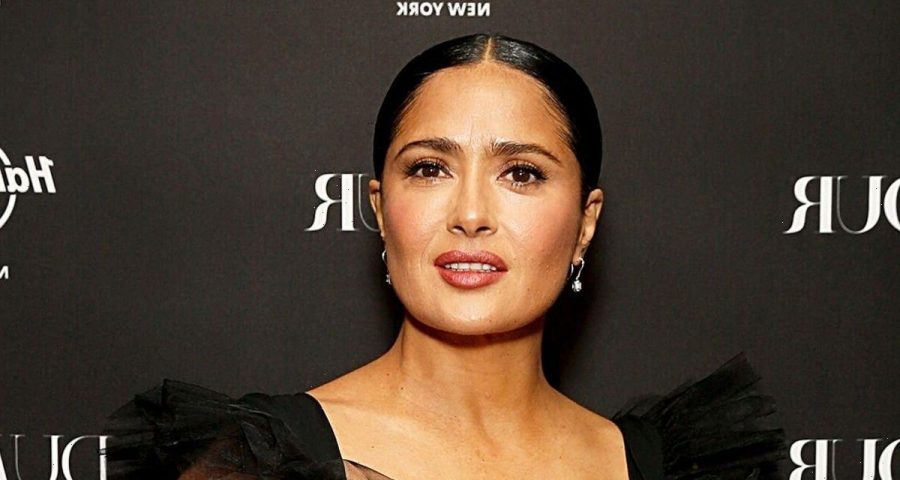 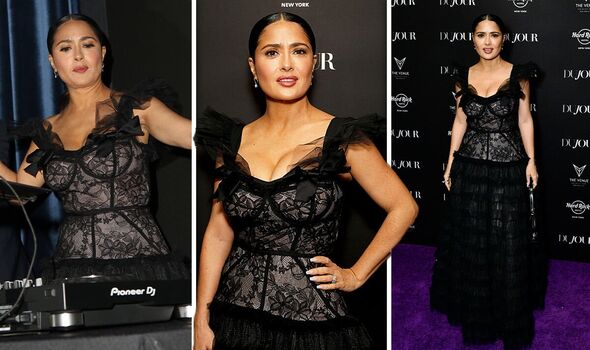 Salma Hayek, 56, looks younger than ever in corset gown while showcasing hidden talent

Salma Hayek looked better than ever as she took to the purple carpet last night at the 10th Anniversary of DuJour event in New York. The Hollywood actress used the event to let loose as she showed off her hidden talent later in the evening.

Salma Hayek, 56, stunned in a black elegant dress, consisting of a lace corset top with ruffled straps and black bows on each side.

The Mask of Zorro actress’ maxi skirt featured a ruffled sheer material and flowed down effortlessly to the floor.

The Hollywood actress showed off her ample assets while accessorising with a chic black handbag.

Her hair was parted in the middle and pulled back into a sleek updo, revealing a pair of dainty, silver earrings.

Salma showed off her hidden talents later in the evening when she was pictured on the decks DJing at the prestigious event.

Salma Hayek sported a black elegant dress, consisting of a lace corset top with ruffled straps and black bows on each side. The bottom of the maxi skirt was made of a ruffled sheer material and flowed down effortlessly to the floor.

Salma Hayek made sure her hair did not distract

Making her gown the main focus of her attire, Salma Hayek opted for a slicked up hairdo, revealing a pair of dainty silver earrings.

Salma Hayek’s makeup was natural, consisting of black mascara, eyeliner and pink blush on her cheeks. She also added a glossy pink lip for the final touch, showing off her ageless complexion.

Salma Hayek was pictured letting her hair down at the prestigious New York event as she could be seen trying her hand at DJing. The actress could be seen dancing and enjoying herself as she took control of the night’s music.

Salma Hayek made sure to have a good time

Salma Hayek was photographed standing at the technical booth with headphones placed on her head as she played a few tunes for the star-studded attendees.

Salma Hayek has been preparing for her latest Hollywood venture

Salma Hayek has been out and about promoting her latest film, Puss in Boots: The Last Wish, which is set to premiere later this month. Salma was cast to voice the character of Kitty Softpaws, Antonio Banderas as Puss, and Florence Pugh as Goldilocks.