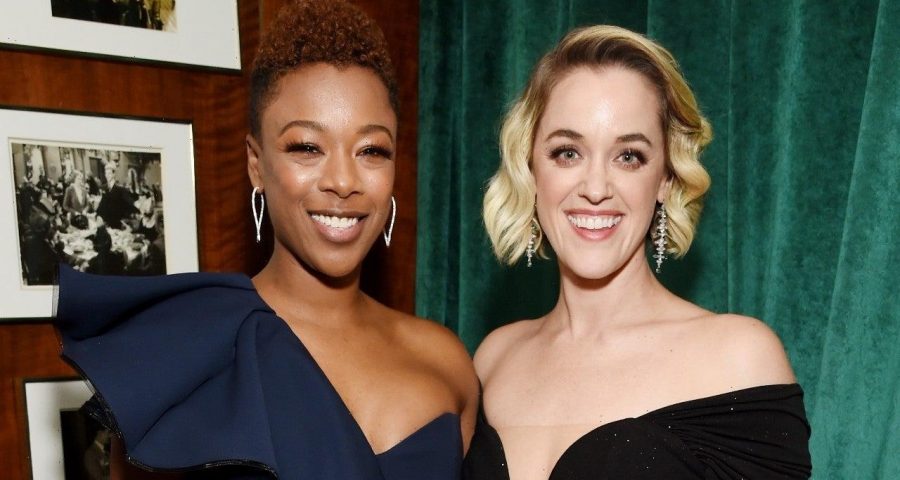 Samira Wiley can’t get enough of life at home with her baby girl. While speaking with ET’s Leanne Aguilera on Wednesday, the Handmaid’s Tale star opened up about her newest role: mom.

Wiley and her wife, Lauren Morelli, welcomed their daughter George in April, but waited until Mother’s Day to share the news. Becoming a family of three has put “so many things into perspective,” Wiley shared.

“She’s so helpless. She can’t do anything. I’m like, ‘You can’t do anything! I have to do every single little thing for you!’ But it puts so many things into perspective, so many things that I thought mattered, that I thought meant so much to me, just don’t matter as much, because I have this little tiny — and she’s so tiny — it’s awesome,” she raved. “It brings me so much joy. So, so, so much joy.”

Welcoming little George has also taught Wiley other things — and given new meaning to the word “blowout.”

“I did not know these little human beings could do such a thing,” she joked, encouraging fans to do their own research. “It’s horrible. It’s crazy!”

Luckily, Wiley and Morelli feel prepared for all George throws at them. Noting the challenges same sex couples have in starting families, the actress says she and her wife went through “an immense amount of planning.”

“It really, I think, forced us in a good way to do some real looking at our relationship and ask questions we might not have if we were able to have a baby without this much planning,” she reflected. “I kept having this phrase, ‘I want to create a soft space for this baby to land,’ because I feel like there are so many babies that are born into families that are not ready for them. And it’s rough conditions and they don’t get the kind of love that they deserve. So, we were really able to take the time to create that soft space for George to land.”

“So I say to any couple — gay or straight — that’s hoping to have a family to work on yourselves as a couple first,” Wiley continued. “And make sure you’re ready that way, because the little boy or the little girl that you’re going to have is going to need a soft, cushy place to land, and that’s going to depend on your love for each other.”

“My wife and I always think it’s our responsibility to just live our lives and show a young LGBT kid or someone out there what is possible. We have been given so much privilege to live the lives that we had,” she shared. “When we got married, our wedding was featured in Martha Stewart magazine, something that hadn’t really happened before with a lesbian couple. So, I am so proud of my family, I am so proud that we are now mothers, that we can say something that our LGBT ancestors could never have said.”

“There are not lesbian families from decades and decades and decades ago. There just aren’t. So, to be proud of our achievements as a couple and now creating a family, it is a pride unlike any other pride from any other year,” she expressed. “I feel like the love between me and my wife was so much, it was overflowing. And now the overflow can go into this little human being. And like, how can I not be proud of that?”

Life has been good for Wiley, who also gushed about getting to reunite with her Handmaid’s Tale co-star, Elisabeth Moss, on screen this season.

“I feel like the reward that the audience is getting for waiting this long for these things to happen this season, I am also getting as an actor,” she shared.

“Also for me specifically to be able to return to the screen with Lizzie, Elisabeth Moss, after not having been with her in the present for the last two seasons, has been amazing,” she added. “Like, the best gift!”