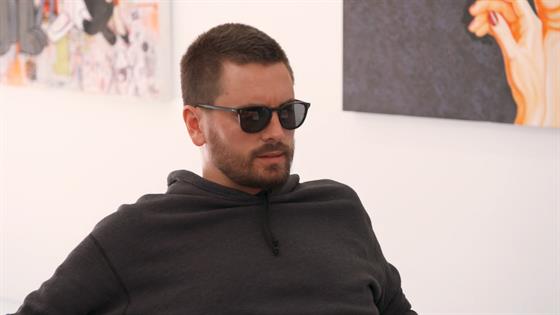 In this exclusive clip from Sunday’s all-new Keeping Up With the Kardashians, Kourtney Kardashian‘s ex brings some of Khloe’s artwork to a gallery for an appraisal. As Scott and Khloe once tricked Kris Jenner into believing that Kardashian’s works were legit, Disick decides to seek out expert Michael Goodman‘s opinion.

“I wanted to find out, specifically, how much some pieces of art are worth that I have,” the father of three explains to Michael.

Without informing Goodman that Khloe is responsible for the pieces, Scott notes that the artist’s hands “are pretty similar to God’s.” Although Khloe previously urged Scott not to bring “The Kourt” painting, he reveals he decided to bring it since he believes in the artwork.

“In my eyes, everything she’s made is amazing. So, I feel like it’s gotta be worth something,” Lord Disick further adds in a confessional.

Sadly, Goodman doesn’t feel as strongly about Kardashian’s art skills. “I rarely say this about abstracts, but this one…I’m not sure what that is,” Michael states. “This artist is very talented at making distasteful paintings.”

Of course, Scott finds the remarks “hurtful” as he’s so close with Khloe. Not to mention, Mason Disick‘s dad is left shocked at Michael’s close mindedness.

“A 3-year-old, you know, could’ve done a better job,” Goodman adds during the appraisal. “I would say this is worth less than the materials. Normally, I could give you a material value—meaning what the canvas cost—but this is actually less.”

In fact, the art expert confesses that he really doesn’t know what someone would “genuinely pay for these.” Michael does leave Scott with some advice for Khloe—to stay away from glitter!

“I don’t know if I could tell her that,” Scott concludes. “She loves it.”

Watch the art appraisal for yourself in the clip above!

Watch a brand new episode of Keeping Up With the Kardashians Sunday at 9 p.m., only on E!