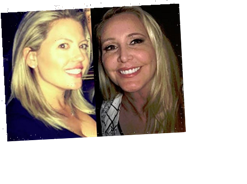 Weeks later, she is taking to Instagram to call out David’s ex for turning their news into a story.

Whether it was just for attention or to make herself look good, Lesley wants Shannon to put a cork in it.

Okay, so back in October of 2020, Shannon Beador was a guest on Jeff Lewis Live.

At that time, she confessed that she had never actually met Lesley, David’s new wife.

Shannon also acknowledged that it was “awkward” to co-parent with David.

“You know, I wish he and his future wife the best,” Shannon remarked at the time.

“But,” she expressed, “I just wish that I had more of a co-parent.”

Apparently, it was largely a communication issue.

“He will not respond to my texts,” Shannon complained.

“And if he does send me some email or text because I need it and then I respond, he’s like, ‘No need to respond,'” she described.

Shannon lamented: “[It’s been one-sided] for a long time.”

Fortunately, their 19-year-old daughter Sophie is an adult.

And at 16, Adeline and Stella likely don’t need the level of constant activity and communication that they might have several years ago.

But kids are kids — if you have them, you need to be willing to co-parent with an ex.

She shared that she “sent a gift” to David and Lesley following the birth of their baby.

Shannon admitted that she was unsure of how much they liked it.

“I mean, I sent it with the kids [we share],” Shannon noted.

Well, we at least know how Lesley feels about it.

Taking to her Instagram Stories, Lesley shared a screenshot of an Us Weekly headline.

“This didn’t happen,” she alleged, before issuing a request: “Please just let us be.”

Now it certainly appears that Lesley is accusing Shannon of fabricating this story.

But let’s say that Lesley genuinely believes that she is saying.

That doesn’t necessarily mean that Shannon’s a liar.

Depending upon the alleged gift, the Beador daughters might have decided to wait for the right time and place to hand it over.

(Gifts from one ex to another can be … complicated, and these young women are old enough to recognize that)

They could also have simply handed it to David, who might have chosen to not tell Lesley for reasons of his own.

We obviously do not know where exactly the mix-up (or outright deception) took place.

We are unwilling to accuse the teens of being responsible.

Shannon, David, and Lesley are all more than capable of having complex relationships with the truth.

At the end of the day, this is about a man’s ex-wife, the man himself, and his new wife.

Perhaps one day, they’ll be able to speak in harmony and laugh about this. But clearly, now is not that time.