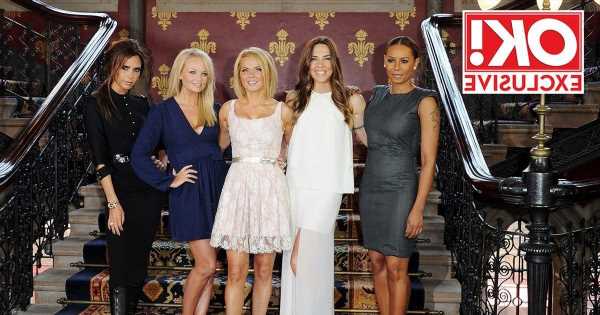 Emma Bunton's Spice Girls bandmates were not invited to her wedding and didn't even know she was getting married, it has been claimed.

The 45 year old surprised fans on Tuesday when she announced she had finally married her partner of 23 years, Jade Jones.

But nobody would have been as surprised as her close friends Mel B, Geri Horner, Victoria Beckham and Melanie C, who weren't informed the nuptials were taking place.

Reports suggest Baby Spice and her Damage singer husband Jade, 42, wed in a very intimate ceremony at Soho Farmhouse in Chipping Norton – which is one mile away from Victoria's home – with just six guests present.

Only the pair's two children, Beau, 13, and Tate, 10, their mothers and two witnesses are believed to have been present at the low-key wedding.

A source told OK!: "They kept the wedding totally secret. They didn't tell anyone. They didn't want anyone to know. It was a top secret. Even the Spice Girls didn’t know.

"They just wanted it to be between the two of them. They didn't really want any fuss. They're very low key and understated.

"They've been together for a long time. This wedding was a long time coming. But they didn't ever feel like they had to marry. They're a very secure couple. Emma didn't feel like it would make a difference having the ring on the finger. It was quite impulsive."

Emma's Spice Girls bandmates were quick to lead the stars congratulating her and Jade after they announced the happy news on Instagram, with Victoria rushing to the comments section.

She penned: "Congratulations. Love u both so much!! X"

While Geri Horner shared the post to her Instagram story, tagging the pair as she commented: "Congratulations @emmaleebunton and @jadejonesdmg so happy for you and your lovely family!"

Mel B simply wrote: "Yipppeee," as Melanie C posted a string of red love heart emojis, followed by: "Yeahhhhhh! Congratulations love you all sooooooo much."

Emma's wedding isn't the first the other members of the Spice Girls weren't invited to as none of them were in attendance at Mel B's wedding to second husband Stefan Belafonte in 2007.

However, Emma, Victoria and Melanie C joined her at her 1998 wedding to first husband, Spice Girls dancer Jimmy Gulzar.