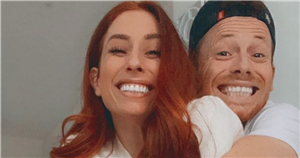 Stacey Solomon has opened up on her and Joe Swash's wedding plans a year on from their magical Christmas Eve engagement.

Loose Women star Stacey, 32, said yes to TV star Joe, 39, as he got down on one knee on Christmas Eve last year.

The pair had originally planned to tie the knot in 2021, but decided to move their nuptials after Stacey became pregnant with the couple's daughter Rose, who was born in October this year.

Now, Stacey has looked back on her romantic engagement by sharing a sweet throwback photo of herself showing off her sparkling engagement ring on her Instagram story.

Writing below the image, Stacey got nostalgic as she said: "I can't believe it's been One Whole Year".

She then gushed over her upcoming wedding to her beloved hubby-to-be Joe: "I can not wait to walk down the aisle to you @realjoeswashy with our boys and out little princess" followed by a smiling face emoji with a tear.

"2022 I can't wait for you" Stacey gushed followed by a white heart emoji.

It comes after Stacey opened up on her wedding plans on Loose Women's Christmas Special.

Stacey appeared alongside her fiancé Joe and their baby daughter Rose via video link to share their plans for their nuptials.

The Loose Women panellists quizzed the couple of when the wedding will be taking place, to which Stacey said: "Get your hat out, Ruth. Yes, we would love… if all goes well.. because Covid’s still massive and you never know what’s around the corner, but we would love to get married in July next year, we really would.

"It will be so nice to have the boys and Rose there."

During the show's appearance, Stacey also shared her excitement over Christmas. She explained of her and Joe's two year old son Rex: "This is such an exciting time for Rex. He’s two and a half and it’s the first Christmas he’s had where he’s like, ‘Wow.’ The older boys are excited for him as well.

"It’s so lovely and nice to see them all together getting excited. And it’s just nice to be in the house."

Stacey is a proud mum to sons Zachary and Leighton from previous relationships. She also shares Rex and Rose with EastEnders star Joe.

Meanwhile, Joe is also a proud dad to his son Harry.

Joe also admitted during the interview that he is still adapting to having a daughter as Pickle Cottage was full of boys.

He explained: "Because I’m quite boisterous and I know the boys are quite robust – I can chuck them about a little bit and wrestle them, especially when I’m changing the nappy, I know the boys limitations because I’ve got one myself, but with baby Rose it’s different, I’ve got to be a lot more gentle and delicate."

For more updates on Stacey Solomon and the rest of your favourite stars, sign up for OK!'s daily newsletter here.