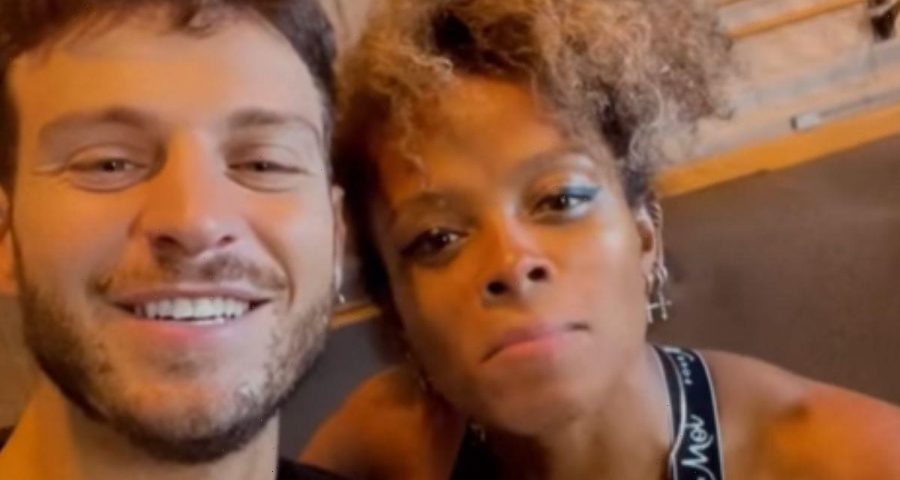 Strictly: Fleur East discusses being in the bottom two

The sensational Fleur East and Vito Coppola received an almost perfect score for their Argentine Tango last week, but Vito’s Instagram revealed some troubles in paradise. The Italian took serious offence at Fleur’s food choices on Tuesday evening, capturing the moment on his Instagram story.

A dismayed Vito appeared on his Instagram story, slowly leading into Fleur behind him, cradling a takeaway box of food and a cappuccino.

As he zoomed in on Fleur’s food, she questioned: “How can I help you?” to which he mysteriously replied: “Chips, salad and cappuccino?”

Confused, Fleur asked what was wrong with her selection, adding that she could eat different foods now that their tango routine was over.

Vito covered his face and exclaimed: “Oh my god! This is a crime!

“Salad, chips, onion and all the stuff that are in the salad, cheese and blah blah blah. With the cappuccino?

“You cannot do this match!”

The curious Fleur continued to badger her dance partner with questions asking “why” and “who says” she couldn’t pair her cappuccino with chips and salad.

Vito explained: “Because it’s not good. (Cappucino) goes with other stuff. Sweet, croissant.”

Fleur mocked her colleague, saying with a dramatised Italian accent: “The rule! The rule! It’s the rule!”

Ending the video, Vito simply sat back and said: “I mean you could go to the jail for this.”

The culture clash seemingly didn’t hurt the pair’s friendship, as they returned to Vito’s Instagram the next day, back in the Strictly practice room.

Vito greeted his followers before glancing at Fleur and continuing their friendly row with: “She is eating, always!”

Fleur retorted: “You just wait till I’m eating and then you film.”

Getting over their grievances, the dancing duo noted they wanted to personally thank the fans that had kept them in the Strictly competition thus far.

To do that they announced they are doing an Instagram live around 6pm in the UK.

Vito also laughingly noted it would be “7pm for the Italian people”.

However, he first noted that he and Fleur had to practice their jive for the next stage of the Strictly competition.

Last week Fleur and Vito scored a staggering 38 points out of 40 from the judges.

Their Argentine Tango routine to a cover of The Rolling Stones’ Paint It Black impressed judges and fans as they survived to the next round.

Strictly Come Dancing continues on Saturday on BBC Two for the Centenary Special.