Taylor Swift has broken her silence on the newly-leaked "Famous" phone call footage from 2016. And, reader, her response is good.

If you took a break from the internet this weekend, let me catch you up to speed: Late Friday night (March 20), footage of what appeared to be the complete, unedited 2016 phone call between Swift and Kanye West about his song "Famous" hit the web. That track, remember, has the lyrics, "I feel like me and Taylor might still have sex/Why? I made that bitch famous"—which Swift took issue with at the time, specifically the word "bitch." In a 2016 interview with GQ, West's wife, Kim Kardashian, claimed Swift approved of the lyric ahead of time, then leaked footage of the phone call on Snapchat that seemed to corroborate that. Swift was quickly labeled a liar and "snake" by people on the internet.

But this new footage vindicates Swift completely. West never mentions in the call that the word "bitch" would be used in the song. In fact, at one point in the conversation, Swift literally says, “It doesn’t feel mean, but oh, my God, the build-up you gave it. I thought it was gonna be like, ‘That stupid, dumb bitch,’ but it’s not.” So you can imagine Swift's hurt when the word "bitch" did make it into the song.

Fans have been waiting for someone in this trio—Swift, West, or Kardashian—to make a statement about this new footage. Kardashian "liked" the tweet, below, and Swift "liked" some posts on Tumblr, but no one has said anything.

Until now. Taylor Swift is the first person to officially break their silence on the issue, taking to Instagram Stories and urging fans to focus on "what really matters" right now—helping those affected by coronavirus—instead of petty drama.

She did, however, say a few pointed words before showing fans how they can donate to the World Health Organization and Feeding America. 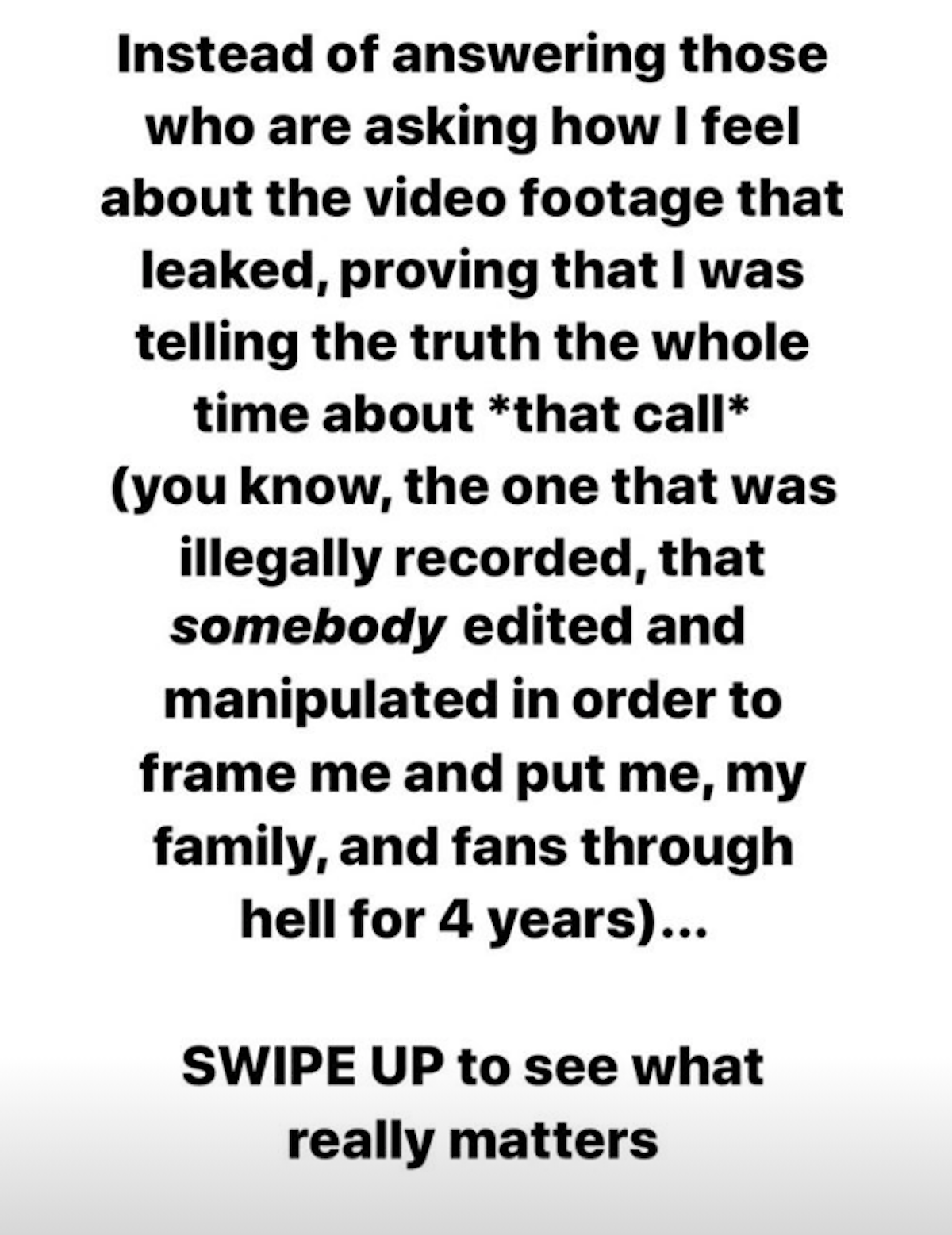 “Instead of answering those who are asking how I feel about the video footage that leaked, proving that I was telling the truth the whole time about that call (you know, the one that was illegally recorded, that somebody edited and manipulated in order to frame me and put me, my family and fans through hell for 4 years)…SWIPE UP to see what really matters," she wrote.