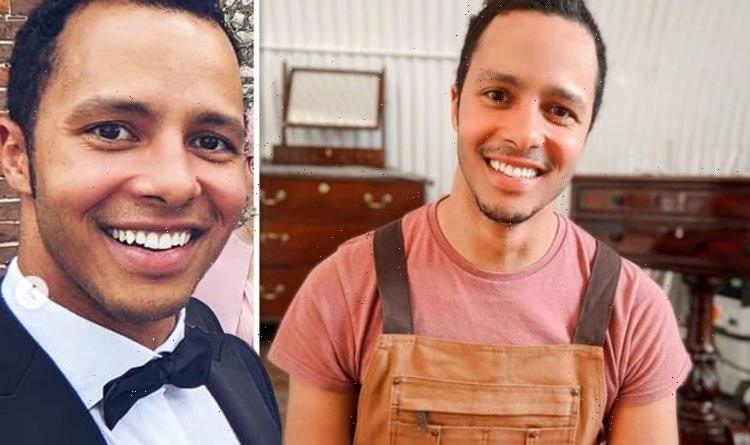 The Repair Shops’ Will Kirk, 36, has revealed he has finally tied the knot with his doctor fiancé after being forced to postpone his wedding from last year. Sharing some sweet snaps from his big day, the craftsman and his new bride looked delighted as they finally made their way down the aisle, a year later than planned.

Taking to social media, the furniture restorer confirmed that he and his blushing bride, whose name he has kept private, has finally said “I do” in an elegant ceremony.

In view of his 122,000 followers, Will penned a sweet message to attendees of his wedding.

He wrote: “The best day of my life

“Thank you to all who attended and to those that helped to make it happen.”

The star went on to share the highlights of his wedding day in a series of sweet snaps.

Wearing a navy blue suit, Will looked dapper as he and his bride grinned walking back down the aisle together after having exchanged vows.

In an elegant, v-neck, traditional white dress with lace sleeves, Will’s new wife looked beautiful as she clutched onto a bouquet of white roses.

Family and friends threw white flower petals over the happy couple in celebration while grinning from ear to ear.

Another snap showed the newlyweds standing outside in an intimate embrace.

The pair looked thrilled they were finally able to make their way down the aisle, despite it being a year later than they had originally planned.

Appearing on Lorraine last September, Will told the ITV presenter that they were forced to cancel their wedding plans.

The Scottish TV host asked The Repair Shop star: “You are engaged and that’s grand! How has the lockdown been for you?”

He replied: “I’ve been putting up lots of shelves, the lovely fiancée has been keeping me very busy!

“We were supposed to be getting married in August and unfortunately that didn’t happen, so we’re going to get married next year. Yes, I’ve been kept busy!” he added.

Presenters Kym Marsh and Gethin Jones shared kind messages from cast members with the furniture restorer, making him tear up.

“Listen, good luck over the next couple of weeks with the wedding,” Gethin said.

“We couldn’t let you go without at least sending you some well wishes from the Morning Live family.

“More importantly, some relationship advice.” Before the clips had even begun, Will said: “You’re going to make me cry.”

The video saw the likes of Rav Wilding and other Morning Live faces wish him luck, as Will said “Thanks guys, I’m going to cry on TV.”