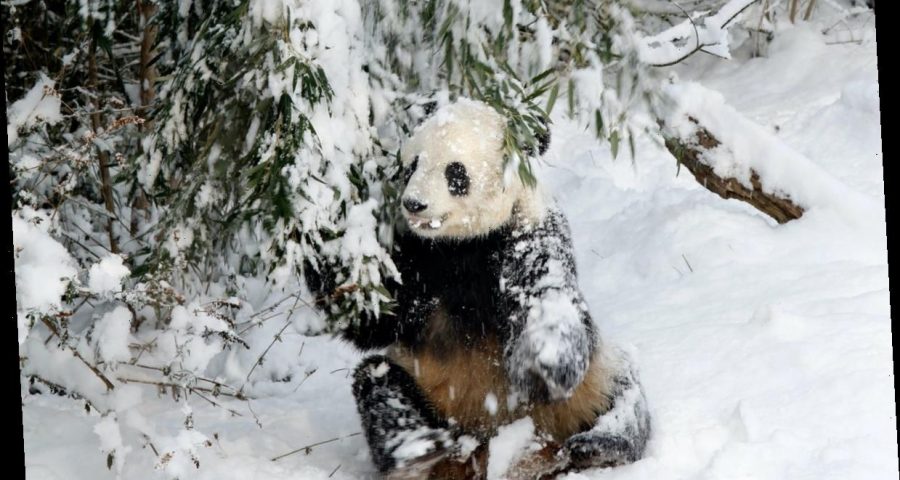 Two giant pandas are showing everyone exactly how to do a snow day right, thanks to a viral video from the Smithsonian’s National Zoo. Following heavy snowfall in the Washington, D.C. area on Sunday, Jan. 31, the zoo took to Twitter to share footage of adult giant pandas Mei Xiang and Tian Tian sliding and doing somersaults in the fresh powder. This video of pandas playing in the snow at the National Zoo shows the bears tapping into their inner child (or, rather, cub) — and judging from the reactions on Twitter, it’s the carefree and joyful vibe we all need in our lives as we head into the week.

After the D.C. area got between two to four inches of fresh powder on Sunday, Jan. 31, thanks to what the Weather Channel has dubbed Winter Storm Orlena, the Smithsonian gave animal lovers a reminder that not everyone was in hibernation mode as a result of the storm. While the zoo has been temporarily closed since November 2020 as a result of the ongoing COVID-19 pandemic, the staff decided to gift fans a video of two of the zoo’s most adorable residents enjoying the winter wonderland.

Mei Xiang, a 22-year-old female giant panda who was born in China and weighs about 233 pounds, and 23-year-old male giant panda Tian Tian, who was also born in China and weighs 264 pounds, decided to take advantage of the conditions. Their snow day activities, which the Zoo shared on Sunday afternoon to its Twitter account, are so pure. In addition to taking advantage of a makeshift snow slide to slide down the hill headfirst, the smiling giant pandas can be seen doing somersaults, rolling around in the snow, and emulating so much joy during their play date.

Unfortunately, viewers weren’t able to see the couple’s newest addition: Male cub Xiao Qi Ji, who was born in August 2020 and has not been weaned from his mother yet, was nowhere in sight during the snow day activities. Still, many fans saw the video as a welcome reminder to take a pointer from Mei Xiang and Tian Tian’s carefree vibes heading into the work week. After all, there’s nothing quite like giant pandas acting like giddy kids on a snow day to put a big smile on your face.

Their resemblance to playful puppies adds a whole other layer of cute to this video.

Unfortunately, only time will tell when it’s safe enough for the Smithsonian to reopen its doors to visitors, but in the meantime, panda fans can check out the zoo’s panda cam to catch more adorable moments from its residents. After all, with more snow expected in the D.C. area on Monday, Feb. 1, it wouldn’t be surprising if Tuesday’s snow day is even more epic than its predecessor.