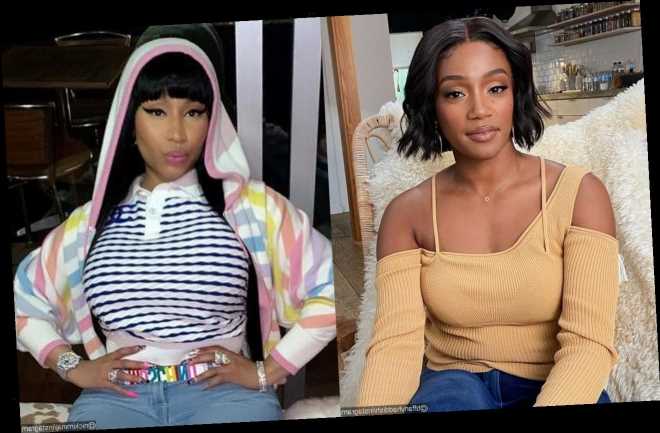 The ‘Girls Trip’ star previously received backlash from the Trinidadian rapper’s fans, who are known as the Barbz, after she was heard dissing the ‘Anaconda’ rapper in a Clubhouse chat earlier this week.

AceShowbiz –Tiffany Haddish apparently still has so much more to say about her claims that Nicki Minaj is disrespectful to others. The “Girls Trip” star made public her sentiments about the matter by liking some tweets talking about the “Anaconda” rapper.

Seemingly clarifying her remarks, Tiffany was seen liking a tweet that defended Nicki against the claims. “Very much so. Nicki is only disrespectful when she is disrespected. Everything she has said has come to light being right!” the tweet read.

That wasn’t the only Nicki-related tweet that the comedienne liked. “Why the hell is there a @TiffanyHaddish & @NICKIMINAJ comparison to begin with?” read the tweet which alluded that Tiffany wasn’t really a fan of the comparison.

Tiffany received backlash from Nicki’s fans after she was heard dissing the Trinidadian rapper in a Clubhouse chat. When someone labeled her the “Nicki Minaj of comedy right now,” the girlfriend of Common responded, “Unlike Nicki, I treat everybody with respect and dignity.”

She further enraged the Barbz when she appeared to feign ignorance when being called out by a Nicki fan on Twitter. “@TiffanyHaddish congrats sweets, you are getting the clout you so badly,” the fan tweeted on March 16. “funny how you diss a group of young women then pretend to take it well when @NICKIMINAJ checked you for it but you’re still out here crying, you’re too grown for this. Sit down.” Catching wind of the tweet, Tiffany simply replied, “Huh?”

The fiery responses were immediate. “don’t play dumb you mrs potatoe head looking wh0r3.” Another person added, “Girl what’s confusing???? They said what they said.” Someone else tweeted, “Forming amnesia won’t make you any funny.”

The tension between Tiffany and Nicki started when they clashed the 2018 VMAs. At the award-giving event, Tiffany shaded Fifth Harmony while gushing over former member Camila Cabello. The diss didn’t sit well with the “Chun-Li” raptress. When she took the stage to accept an award, she warned Tiffany, “Tiff, don’t be coming for Fifth Harmony, because [Normani Kordei] is that b***h. I’m just saying.”