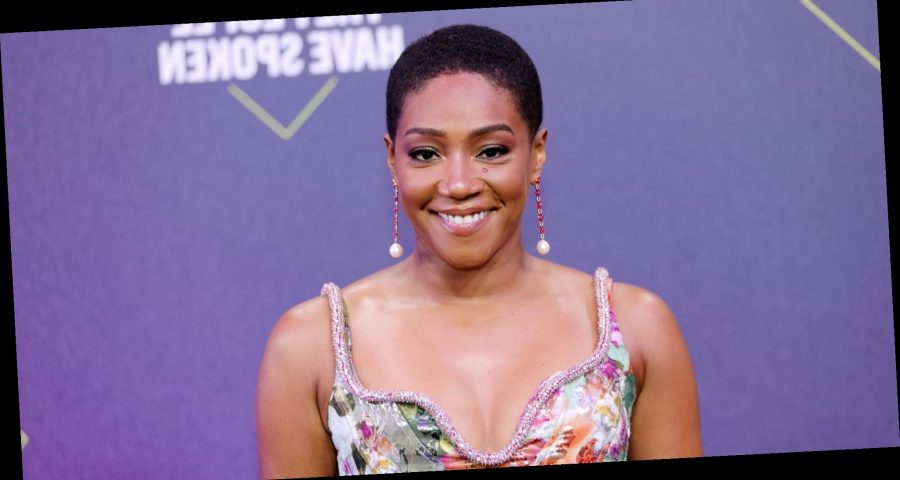 From shaving her head to sharing the mic, Tiffany Haddish could teach a masterclass in being a badass. The actress, comedian, and producer takes a you-do-you approach to life, and she'll be the first one to tell you that she doesn't care what anyone thinks. Of course, that just makes us love her even more. But has she always been so bold? For our February issue, we spoke to the star — who drops the second season of her Netflix show, Tiffany Haddish Presents: They Ready next month — to find out.

What does it mean to you to be a badass?

When I was a kid, being a badass meant you got a lot of spanking. But now it means you’re not going to let anyone take anything from you and you’re going to fight for what you think is right. A badass is someone who is informed, willing to take action, and willing to do good in that action. Also, having minimal fear. A lot of people tell me I’m fearless, which is not true. Fear is the biggest challenge I’ve had to overcome. I still have a bit of fear about false information appearing real, so I’m always keeping that in check.

When do you feel most badass these days?

I've been feeling pretty badass because I've been losing weight. I'm getting my body together, doing a 30-day transformation to get healthier. And my booty looks good! I look in the mirror like, "Damn, girl, you lookin' ready!" I also feel like a badass when I'm talking to foster kids and one says, "If you can do it, I can do it, Tiffany!" Our youth is our future, and I need them to have all the hope they can possibly have.

Is there something you never dreamed of achieving that you’ve made a reality?

Being nominated for a Grammy twice in my career even though I'm not a musician, that feels pretty damn good. Hosting SNL too. I wrote that monologue and it got me an Emmy. Every one of my projects that's been nominated for an award or has won one — my audio book, my Black Mitzvah comedy special, Season 1 of my Netflix show They Ready — has been something that was my vision. When you follow your gut instinct, you will have the most success.

You’re always uplifting people. Why did you want to spotlight other comedians on Tiffany Haddish Presents: They Ready?

I'm sharing the platform, and to see them shine and get people's eyes on their talent is just the best. Plus, I know it's going to bring joy to people, and my No. 1 goal is to bring joy.

Where have you been finding joy lately?

I’ve been watching comedy shows and my favorite cartoons. I’m also on this app called Clubhouse, which is like going to a mixer but you don’t have to get dressed up because nobody can see you. It’s just a party line, group chat. It’s so fun. I talk to people all over the world about all kinds of weird things.

You’re also not afraid to engage people on serious topics like the human-rights crisis in Cameroon or COVID-19’s impact on the Black community. How do you maintain that balance?

As a comedian, you need to pay attention to what's going on in the world. Science is more important than ever to understand this virus and how to protect yourself. It's my job to spread news and information, and having facts and knowledge can make your comedy — and your conversations — stronger and more interesting. For years I tried to stay away from politics because I feel like that's a dirty business. But as I get older and see how things are in the world, it's important to me to speak up and get people to take a look. And how can I do that if I'm not looking?

You recently shaved your head just to see your scalp. Have you always been so curious?

Yes. I’m very curious and want to learn everything, because if you know who you are and what you like, then you can attract more of what you need. And, man, I fell in love with myself when I cut off my hair! I got to see all my features. I was like, “Oh, look at those pretty eyes you got!” It’s like that hair was blocking me from seeing me. People kept asking if I’d lost my mind, though. It’s not usually important to me to defend myself, but when the moon is full and my cycle is on, I’m going to have to put some people in their places. Chime in to give some facts, tell them to kiss my ass, and keep it pushin’. Women need to have the freedom to do with themselves what they will.

How have you learned to take ownership of what you present to the world?

I just do what lights me up. If I don't feel good about something, I'm not doing it. I've given people their money back — a million dollars and some change — because I didn't feel comfortable with what they wanted me to do. It was not in alignment with my spirit, my brand, or me as a person.

Getting six-pack abs is on my goal list. Running as fast as Flo-Jo. Completing at least three of the movies on my roster by next summer. And it would be nice to win that Grammy. I don’t need it…but it’d be nice [laughs].

Season 2 of Tiffany Haddish Presents: They Ready premieres on Netflix in February.

For more stories like this, pick up the February 2021 issue of InStyle, available on newsstands, on Amazon, and for digital download Jan. 15.