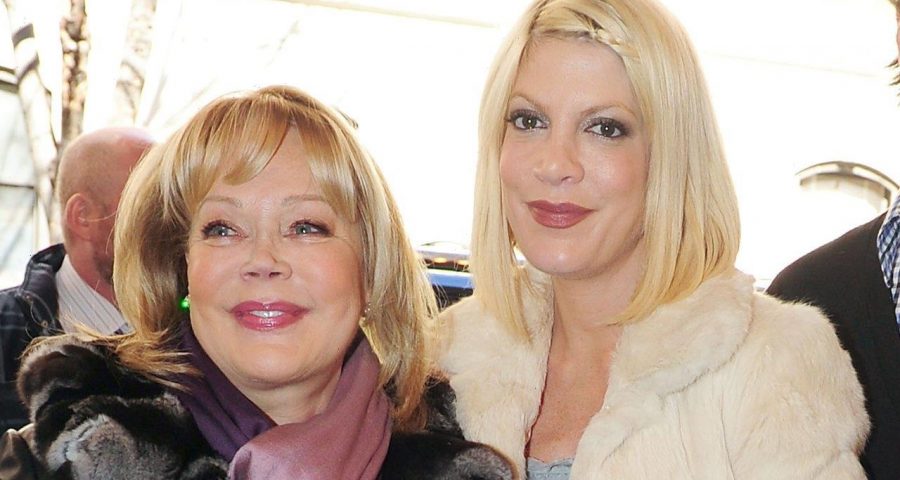 The former ‘Beverly Hills, 90210′ star and her author mother are spotted getting close during a beach day with the actress’ family, including her husband Dean McDermott.

AceShowbiz –Tori Spelling is seemingly patching things up with her estranged mother. Making use of the Labor Day weekend, the actress has been seen reuniting with her mom Candy Spelling for the first time in years.

The Donna Martin of “Beverly Hills, 90210” and her mother enjoyed a beach day in Malibu over the weekend. They were joined by family and friends, including Tori’s husband Dean McDermott, one of their five kids, “Million Dollar Listing” star Josh Flagg and his boyfriend Andrew Beyer, as they took a stroll along the shore.

In pictures obtained by Daily Mail, Tori, who showed skin in a lace bra top and black pants, was seen walking hand-in-hand with Andrew, who was also holding hands with his reality TV star beau. An adorable white pooch was seen following them closely on Tori’s behind, before the group made camp in their lounge chairs.

The 49-year-old actress, who glammed up with a bright red lipstick and some accessories, including dark shades, was seen listening attentively as she spoke to her mother, who was clad in a plaid mumu and a white fedora with a black stripe. They appeared close as Candy cracked a smile during the conversation.

Dean seemed to enjoy the sight in front of him as he beamed with joy while watching the mother-daughter duo have a chat with his child sitting on his lap. His 5-year-old son and youngest child Beau, meanwhile, played with a twig that he was carrying around.

Apart from snaps on social media, the last time Tori and Candy appear to have been photographed together was five years ago in 2017. Their relationship reportedly turned sour following the death of the actress’ father Aaron Spelling in 2006. Under the terms of her father’s will, the former “Tori & Dean: Cabin Fever” star received just $800,000 out of her father’s estimated $500 million fortune.

In 2009, Tori attempted to downplay the feud in an interview with PEOPLE after Candy claimed she has had no contact with her daughter. “It’s not like we’re not talking, we just haven’t talked,” she said. “I love my mother. I’ve always loved her [and] no doubt she loves me. There’s no feud. We simply never meshed.”

“I, in no way, cut her off,” Tori added. “She is welcome to make the effort if she wants to be present in their lives. She knows how to reach me, she knows where we live. If she would love to see her grandchildren, she should really make an effort to reach out and see them.”