Hours earlier, the White House physician issued a memo explaining why the president didn’t need one 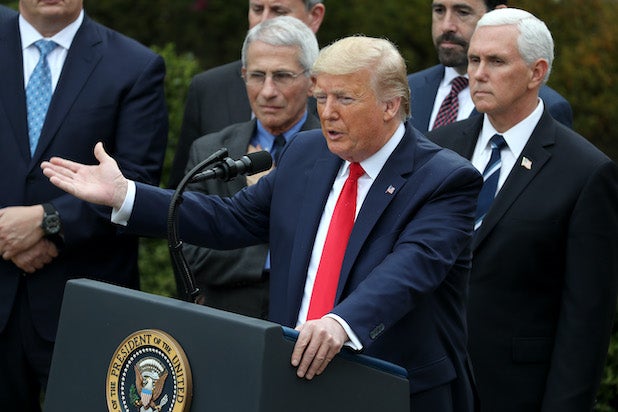 President Donald Trump said during a Saturday press briefing that he was tested Friday night for the coronavirus and that the European travel ban would be extended to the U.K. and Ireland as of midnight Monday.

During a news conference in the White House briefing room, reporters pressed the president as to why he hadn’t taken a test, considering he interacted with multiple people who have tested positive for COVID-19, including two Brazilian delegates.

“I also took the test last night,” Trump responded, adding that it was sent to the lab and the results would be available in a few days. He also said his temperature was taken before the briefing.

Before exiting the room, reporters shouted out, asking what his temperature was. The president said on his way out, “Totally normal.”

Trump said on Friday that he would “probably” be tested, only for the White House doctor to issue a statement shortly thereafter explaining why he shouldn’t be tested or self-quarantine despite those interactions.

“The President’s exposure to the first individual was extremely limited (photograph, handshake), and though he spent more time in closer proximity to the second case, all interactions occurred before any symptoms onset,” the memo dated March 13 from Sean P. Conley, “physician to the president,” read. “These interactions would be categorized as LOW risk for transmission per CDC guidelines, and as such, there is no indication for home quarantine at this time.”