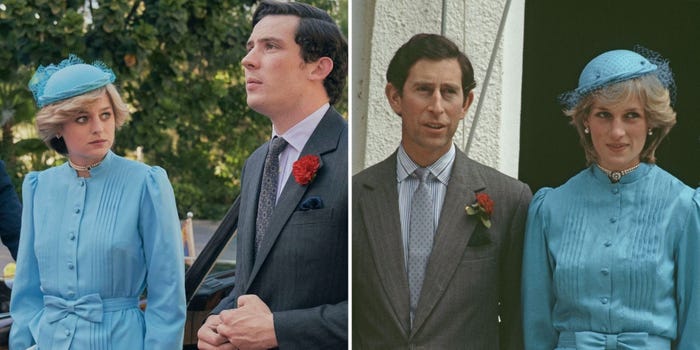 A British politician is planning to request that Netflix displays a "health warning" at the start of each episode of "The Crown," the historical-fiction TV series that depicts the royal family, according to the Daily Mail.

On Saturday, Secretary of State for UK Digital, Culture, Media and Sport Oliver Dowden told the Daily Mail that he wants Netflix to add a disclaimer to "The Crown" tailored for audience members who didn't live through the events depicted in the show.

"It's a beautifully produced work of fiction, so as with other TV productions, Netflix should be very clear at the beginning it is just that," Dowden told the Daily Mail. "Without this, I fear a generation of viewers who did not live through these events may mistake fiction for fact."

According to the Daily Mail, Dowden plans to "write to the streaming giant to formally request that it adds what others have called a 'health warning' at the start of each episode."

Season four of "The Crown," which premiered on Netflix on November 15, follows the royal family from the late '70s until the early '90s — depicting events such as the Falklands War, the public marriage of Prince Charles (Josh O'Connor) and Princess Diana (Emma Corrin), and a seemingly tense relationship between then-Prime Minister Margaret Thatcher (Gillian Anderson) and the Queen (Olivia Colman).

The series, created by Peter Morgan, has been subject to backlash from some historians and audiences.

For example, episode nine of the show's fourth season depicts a fatal skiing accident that led to the death of British Army Major Hugh Lindsay. After the season aired, Sarah Horsley, Major Hugh Lindsay's widow, told The Sunday Telegraph that the accident was a "private tragedy" and she had previously asked the show's producers not to adapt the disaster for television.

Australia's national news network also pushed back on how "The Crown" seemingly took "creative license" when portraying an interview its former prime minister gave on the network ABC. In reality, then-Prime Minister Bob Hawke was interviewed welcoming Prince and Princess of Wales on their visit to the country in 1983 and didn't actually say some of the lines "The Crown" inserted, such as referring to the Queen as "a pig."

In another episode from season four, "The Crown" tells the story of a man, Michael Fagan, who broke into the Queen's bedroom in Buckingham Palace, which really happened — but the series' portrayal showed a more lighthearted interaction between Fagan and the Queen than in real life.

Hugo Vickers, a historian and author of "The Crown Dissected," previously told Insider that in the latest season of "The Crown," the love triangle between Prince Charles, Camilla Parker Bowles, and Princess Diana is depicted as "one-sided."

"The way this series portrays their relationship, you have Charles as a kind of wimp, and evil and unpleasant, shouting at his wife and things like that," Vickers told Insider's Mikhaila Friel. "We never get her massive tantrums, and the things that she did that he had to put up with. It's entirely one-sided."

Vickers also told Insider that the production value of "The Crown" can make it look "very convincing."

"What you have to do with 'The Crown' is just suspend all belief about it," Vickers said. "It's so well-filmed and lavishly produced with good actors and actresses, so it looks very convincing, but it's all totally fundamentally dishonest."

Emma Corrin, who plays Princess Diana in the show's fourth season, recently told journalist Tamron Hall that she and other cast members want to remind viewers that the series is "fictionalized to a great extent."

"The series that we're in is fictionalized to a great extent. Obviously, it has its roots in reality, but Peter Morgan's scripts are works of fiction," Corrin told Hall. "At the same time, I understand why people would be upset because this is history, and even with Diana, it's still very much fresh, I suppose."

Representatives for "The Crown" on Netflix did not immediately respond to Insider's request for comment.