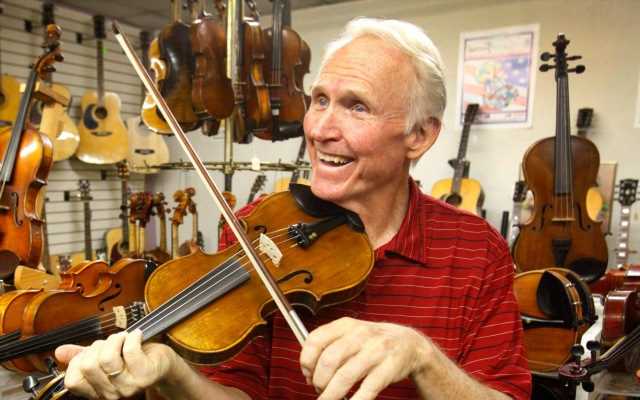 The three-time National Fiddle Champion, who worked with music greats like Vince Gill, Bob Dylan, Elton John and The Rolling Stones, passed away on Saturday, July 10.

AceShowbiz –Byron Berline has died aged 77. The violinist, who worked with music greats like Vince Gill, Bob Dylan, Elton John and The Rolling Stones, passed away on Saturday, July 10 in a hospital after suffering a stroke.

Confirming Byron’s death was his family on his Facebook page. “We want to thank you all for sharing what Byron means to you and how he touched your lives. We are finding them very touching and helpful. Byron loved all your birthday messages and enjoyed seeing the pictures and who they were all from,” they began.

“Byron suffered a stroke in the cerebellum which affected his coordination and vision. He was making improvements with his eyes and coordination, and getting stronger,” the family added. “After a few weeks he began aspirating food into his lungs which led to increased invasive treatments which he couldn’t recover from.”

“Eventually his lungs gave up and so did his heart. He passed at 7:30pm Saturday, July 10, as his band was going on stage at the Music Hall,” they concluded. “In lieu of flowers, donations may be made to the http://OIBF.com scholarship fund. Bette, Becca and family.”

Byron’s wife Bette Berline, meanwhile, recalled her husband as a fun and loving father and husband in an interview with The Associated Press on Monday, July 1. “He was more than a musician, an incredibly gifted musician,” she remembered. “He was a good, good man.”

In 1971, Byron joined rock band The Flying Burrito Brothers, with whom he recorded two albums. He, however, quit the group in the following year. Other artists he recorded with included The Byrds, Gram Parsons, Lucinda Williams, The Dillards, The Doobie Brothers, Rod Stewart, Gene Clark, Emmylou Harris, the Eagles, Earl Scruggs, Bill Wyman, Joe Diffie and Tammy Wynette.

The three-time National Fiddle Champion grew up in Grant County along the Oklahoma-Kansas state line but moved to Guthrie in 1995. He then opened the Double Stop Fiddle Shop & Music Hall, which was burned to the ground in 2019. He, however, had opened a new shop across the street.

Byron was survived by his wife, his daughter and his four grandchildren.