I have been to some truly epic parties around this city, country and planet over the years thanks to this job. 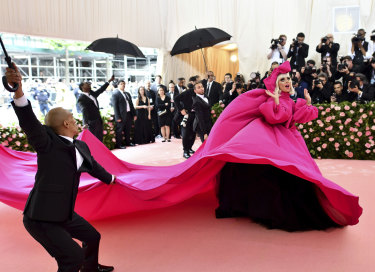 I've found myself holding Liza Minnelli's ash tray out the back of a heaving marquee at Flemington as she sucked away on a Camel. I hobnobbed with Ivana Trump at a cocktail party in a swanky Park Avenue penthouse a few years back and dined at the Playboy Mansion with Hugh Hefner as he slurped on ice cream and jelly in his pyjamas. And there was that time I sipped champagne with Kylie Minogue and her mum in a Bellevue Hill garden overlooking Sydney Harbour and compared notes on growing gardenias and finding "Mr Right".

But there are still a few party invitations I would dearly love to receive, and one to the Met Gala Ball in New York is definitely among them. 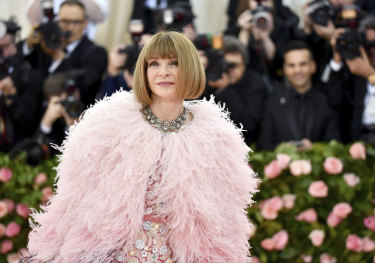 Anna Wintour at the 2019 Met Gala.Credit:Invision

Yes, we are all very familiar with the over-the-top celebrity arrivals at last week's Gala, with Lady Gaga cavorting on the stairs and Billy Porter in all his golden glory being carried aloft Cleopatra-style. 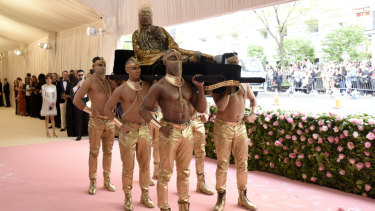 Billy Porter arrives in style to the Met Gala.Credit:Invision

But due to the strict etiquette rules, including a ban on social media updates, sadly, we the great unwashed, know very little about what actually goes on once all those VVVIPs get into the party. (However the no social media rule was flagrantly disregarded by the likes of Kim Kardashian, who appeared to be dressed as an over-stuffed kransky much to the distress of the event's high priestess, US Vogue's Anna Wintour.) 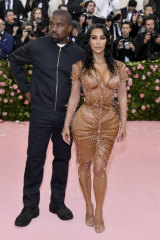 Kanye West and Kim Kardashian at this year’s Met Gala.Credit:Invision

Even the celebrity guests are banned from bringing their ever-present minders to the event.

Left to their own devices, surely this party and its star-studded guest list would provide a little old gossip columnist from Down Under with rich pickings?

So, the following is PS's imaginary account of the party of the year, and while the names are factual, everything else is purely fictional. 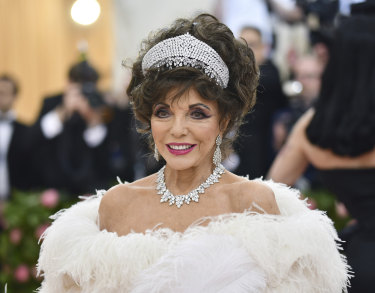 Joan Collins adding a regal touch to the Met Gala.Credit:Invision

NEW YORK, Monday, May 6: Having cleared the Met Gala's tight security, PS mingled with the other guests around the giant pink flamingo installation. Embedded deep in the thick of celebrity central, your correspondent was positioned between Kim Kardashian's glistening and bejewelled derriere and a treacherously sharp arm of Katy Perry's tinkling crystal chandelier get up which had attracted an unwelcome colony of moths, creating an awkward moment for the pop star as she attempted to swat them away, causing her strands of crystals to sway uncontrollably. 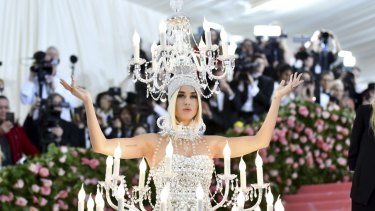 Katy Perry attends The Metropolitan Museum of Art’s Costume Institute and keeps a watch out for moths. Credit:Charles Sykes

Then suddenly the lights – including those on Perry – dimmed.

As Kim and Kanye nibbled on lukewarm party pies in the dark, our attention was directed to the stage where a spotlight fell on our hostess, Anna Wintour. Her bird-like frame was smothered in a pink feathery cape by a hot new ex-pat Australian fashion designer who has taken Manhattan by storm: Ozzie Ostrich.

The world's most powerful fashionista welcomed us to her annual knees up, and then dramatically lit a match to ignite a huge, bedazzled cannon which had been installed on the podium, to mark the opening of this year's Met Gala.

As the fuse got shorter and shorter, anticipation reached fever pitch until suddenly a huge explosion blasted through the vast gallery space. Kanye dropped his pie just as supermodel Gigi Hadid was shot out of the cannon. 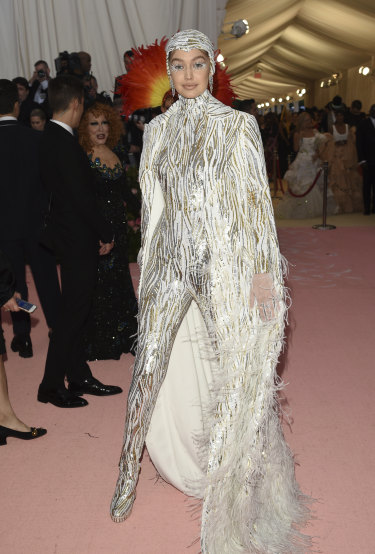 Propelled above the room at high velocity, Gigi, her arms firmly by her side and her body stiffened to form a human missile, carved her way through the air, managing to clear the tight space between the ceiling and Wintour's giant flamingo centrepiece with all the precision of a Barry Hall goal.

And then she pulled off three somersaults and a half pike before landing atop the towering champagne fountain. She didn't spill a drop. The crowd roared.

As the party got into full swing, PS spotted Jared Leto in animated conversation with his severed head, the pair getting very cosy in a corner booth. 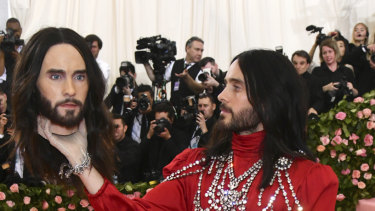 Stimulating conversation: Jared Leto and his severed head at the Met Gala.Credit:Invision

At the next table Ezra Miller was having a terrible time trying to steady his hand as he attempted to re-attach all seven sets of false eyelashes. Thankfully Katy Perry was on hand to shine some light on the delicate procedure. 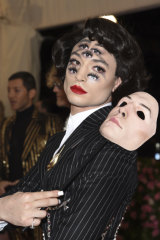 Falsies: Ezra Miller and his eye-popping Met Gala get up.Credit:Invision

Making an early departure from the festivities was Dame Joan Collins, who PS spotted with Donatella Versace rooting through the spare gift bags by the exit.

Dame Joan was overheard declaring to Donatella as she dragged her booty out the door: "This is a better haul than the bonbonniere at Liz Taylor's eighth wedding … if only she had stuffed Larry Fortensky in that damned cannon!"

And what a swell party it (possibly) was.