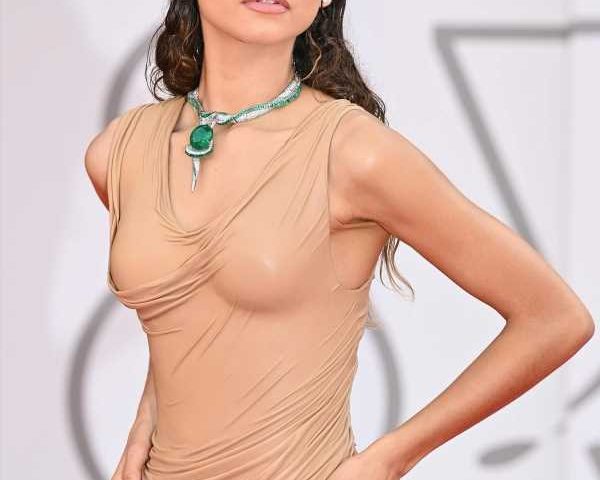 Check out the best of the best, from Lady Gaga in Gucci to Cardi B in Schiaparelli. This year, we finally answered the question, “What did celebrities do during all of those months of quarantine?” Well, apparently, they were planning out their looks for their impending return to the spotlight. Thanks to the vaccine, 2021 marked the resurrection of the red carpet. Slowly, award shows started filling up with actual in-person attendees, as opposed to Zoom boxes. Premieres stopped getting postponed and were actually held. And the Met Gala said the second Monday in September is the new first Monday in May and held their first event in a year and a half. Quickly, it became clear that, upon returning to the red carpet, these stars weren’t messing around. Black tuxedos on men were quickly labeled as monotonous, replaced by bright colors and interesting silhouettes. Oscar De La Renta’s creative directors, Fernando Garcia and Laura Kim, aided in a complete transformation of Billie Eilish at the Met Gala, while Olivier Rousteing turned Zendaya into a Balmain-draped goddess. Some stars opted to remain home (and we cannot blame them for that), but they still turned out looks for the Instagram audiences. In all, the stars and designers spent the year making up for months of athlesuire and the result is 25 unforgettable red carpet moments, many of which will go down in history right next to Gwyneth Paltrow’s pink Ralph Lauren in 1999 and Jennifer Lopez’s green Versace at the 2000 Grammys.

Erivo predicted her casting as the new Elphaba when she wore this futuristic green dress to the 78th Annual Golden Globe Awards on February 28, 2021 in Beverly Hills, California.

While she didn’t walk the red carpet, Fanning’s ethereal Gucci gown had its moment on Instagram ahead of the 78th Annual Golden Globe Awards on February 28, 2021.

The rapper wore an all-black look from the British luxury house and Bonnie Clyde glasses to the 63rd Annual Grammy Awards on March 14, 2021 in Los Angeles, California.

Washington looked like a work of art in her beaded blue gown and matching swim cap for the 2021 SAG Awards on April 4, 2021.

The actress stunned in a red dress with dramatic sleeves and a high slit at the 93rd Annual Academy Awards on April 25, 2021 in Los Angeles, California.

Stanfield turned traditional men’s suiting on its head when he wore this jumpsuit to the 93rd Annual Academy Awards on April 25, 2021 in Los Angeles, California.

Chan stunned in a partly sheer halter dress at the closing ceremony of the 74th annual Cannes Film Festival on July 17, 2021 in Cannes, France.

Zendaya and her stylist, Law Roach, had quite the year, and it’s almost too difficult to choose our favorite look from the actress’ red carpet appearances, but this nude Balmain gown is too gorgeous not to include.

Johnson wore a lot of Gucci while promoting The Lost Daughter this year, but this silver sheer fringe look from the 78th Venice International Film Festival was her best of 2021.

The singer embodied Little Richard and Lil’ Kim in this custom look from the Italian house at the 2021 MTV Video Music Awards on September 12, 2021 in Brooklyn, New York.

Basically everyone had an opinion about Kardashian’s Met Gala gown, which was a large departure from her usual skin-revealing red carpet style.

Rihanna showed up fashionably late in a Balenciaga overcoat and hat from Stephen Jones Millinery when she attended the 2021 Met Gala Celebrating In America: A Lexicon Of Fashion at Metropolitan Museum of Art on September 13, 2021 in New York City.

The singer wore a black lace catsuit inspired by one worn by Jerry Hall in the ‘70s to the 2021 Met Gala Celebrating In America: A Lexicon Of Fashion at Metropolitan Museum of Art on September 13, 2021 in New York City.

Kravitz stole the show in a slinky metal mesh dress at the 2021 Met Gala Celebrating In America: A Lexicon Of Fashion at Metropolitan Museum of Art on September 13, 2021 in New York City.

The actress embodied performer and activist, Josephine Baker in an embellished column dress and Cartier jewels at the 2021 Met Gala Celebrating In America: A Lexicon Of Fashion at Metropolitan Museum of Art on September 13, 2021 in New York City.

For the 2021 Met Gala Celebrating In America: A Lexicon Of Fashion, Gerber wore a black, strapless gown directly inspired by a Dior dress worn by Bianca Jagger to the Met in 1981.

When Eilish began discussions with Oscar De La Renta about her Met Gala dress, she had one demand: the brand had to stop using fur. They agreed and worked together to create this massive peach gown that ushered in a new era of style for Eilish.

The comedian predicted the color of the season when she wore this purple off-the-shoulder gown to the 73rd Primetime Emmy Awards on September 19, 2021 in Los Angeles, California.

CJR’s neon green gown glowed when Coel went on stage to accept the award for Outstanding Writing for a Limited Series at the 73rd Primetime Emmy Awards on September 19, 2021 in Los Angeles, California.

Jolie looked statuesque in Versace’s iconic metal mesh at the premiere of Eternals on October 24, 2021 in Rome, Italy.

Everyone was waiting for Lady Gaga’s Gucci red carpet moment during the House of Gucci press tour, and she did not disappoint when she arrived at the UK premiere of the film in a purple pleated gown with a high slit from the brand’s spring 2022 ready-to-wear collection.

Taylor-Joy had a great year on the red carpet, but this custom Oscar de la Renta look she wore when getting honored as Face of the Year at the 2021 CFDA Awards is too much fun not to include.

Cardi B’s stint as the host for the 2021 American Music Awards started out with a bang when she arrived on the red carpet in this a custom Schiaparelli piece by Daniel Roseberry complete with gold sculpted face mask.

Hill and Brady stole the show in matching pale blue suits at the premiere of Don’t Look Up on December 05, 2021 in New York City.