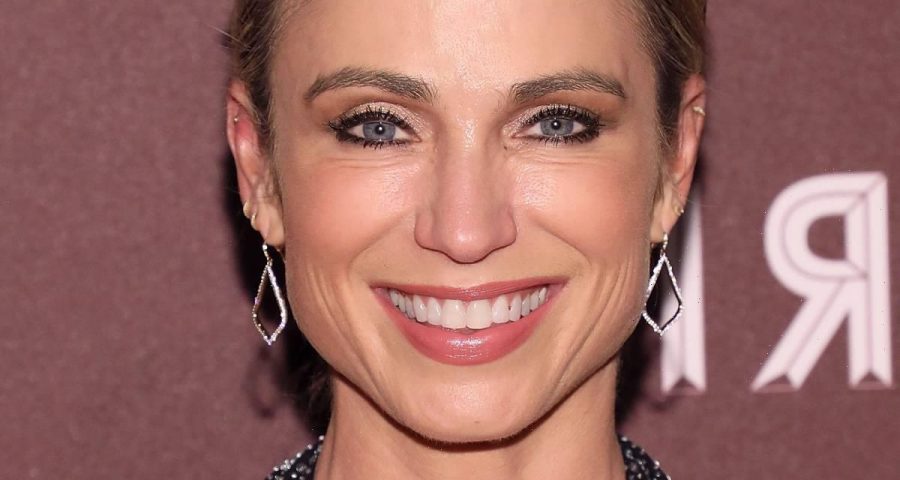 Amy Robach switched things over by appearing on Good Morning America as a guest rather than as a host this week.

MORE: Amy Robach and Andrew Shue announce news fans have been waiting for

The TV star was joined by husband Andrew Shue to promote their debut children’s book, Better Together, while chatting to friend and co-star Robin Roberts.

During the segment, a number never-before-seen family photos were shown, including a beautiful picture of Amy and Andrew on the beach with their kids.

In the photo, Amy looked fabulous in a purple maxi dress, with her hair styled in loose waves as she posed on the sand.

Another picture that was shown was from the couple’s wedding day over ten years ago.

Amy and Andrew take pride in their blended family, who they have affectionately named the Schue box. Their book Better Together is based on the stories they used to tell their kids in order to help them feel comfortable and secure in their new set-up once they moved in together.

At the time, their youngest child was just three, and the oldest was 13.

During the interview with Robin, Amy revealed that while there were many struggles along the way, she is incredibly proud of how close everyone is today.

She said: “It was through those tough times that we now share the bond that we have today and it’s my proudest accomplishment.”

Amy and her husband Andrew Shue

The star added that the other day her oldest daughter fell asleep on top of Andrew’s son and that it was just another sign of how well everything had turned out. “It’s just beautiful,” she said.

Giving advice to other families going through a similar situation, Amy said that her number one tip was to go to therapy. “Be prepared to go to therapy, and that really is my advice,” she said.

“We had to get some professional help to work through the co-parenting thing. It is not an easy thing to do. But be willing to be vulnerable, to open your mind, to open your heart and to say ‘How can we find a path together and how can we be a team? Because you come into it with two teams.”