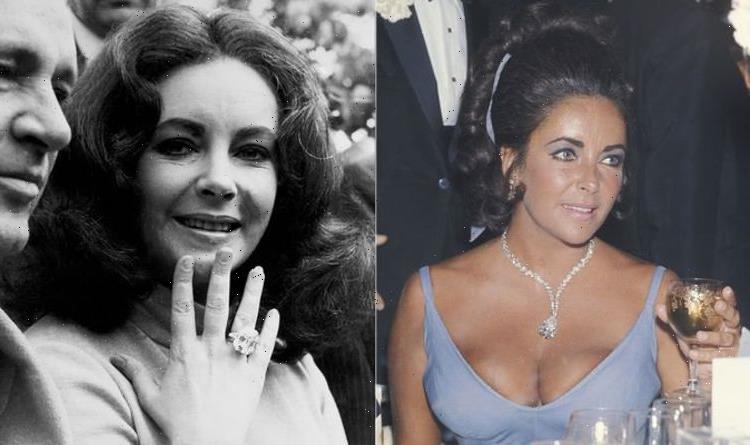 Elizabeth Taylor had a jewellery collection even the wealthiest women could only dream of. The actress – who died aged 79 in 2011 – was an avid collector who had an excellent eye for high quality stones. These are her five most famous items – and only a scratch on the depth of her collection.

Speaking about her desire to own the massive diamond, Elizabeth wrote in her book My Love Affair of with Jewellery: “This remarkable stone is called the Krupp diamond because it had been owned by Vera Krupp, of the famous munitions family that helped knock off millions of Jews.

“When it came up for auction in the late 1960s, I thought how perfect it would be if a nice Jewish girl like me were to own it.

“In truth, though, there’s nothing funny about the Krupp. When I look into it, the deep Asscher cuts-which are so complete and ravishing-are like steps that lead into eternity and beyond.

“With its sparks of red and white and blue and purple, and on and on, really, it sort of hums with its own beatific life. To me, the Krupp says, ‘I want to share my chemistry-my magic-with you.'”

The gem was bought by a Korean retail company for $8.8million at the famous Christie’s auction of Elizabeth’s jewels in 2011.

The most famous item that Elizabeth owned was this 69.42-carat pear-shaped diamond, which Burton bought for her, paying $1million dollars at auction.

He was actually beaten at auction by Cartier for the stunning piece, but came to an agreement with them afterwards as he was so keen to secure it for his wife.

Originally a ring, Elizabeth had it remounted as a necklace saying “even for me it was too big, so we had Cartier design a necklace.”

She famously wore the new design to the 1970 Oscars.

Yet another gift from Burton, this was one he purchased for her while they filmed Cleopatra.

Elizabeth wrote: “Richard was so romantic that he’d use any excuse to give me a piece of jewelry.

“He’d give me ‘It’s a beautiful day’ presents or ‘Let’s go for a walk’ presents. Over the years I’ve come to think of these as my ‘It’s Tuesday, I love you’ jewelry.”

“Richard asked him which he preferred. Bob couldn’t decide either. I tried them on one more time and said, ‘Richard, I think I like the smaller one.’ Bob said, ‘Mr. B., you can’t hardly get girls like that no more!'”

Easrrings, a ring and a bracelet were added to the necklace to create a full suite over the coming years.

This was given to Elizabeth by Mike Todd, her thurd husband. Their marriage ended with his tragic death in an airplane crash in 1958.

He gifted Elizabeth one of her favourite items, the Cartier ruby suite, consisting of a tiara, necklace, bracelet and earrings.

Writing about the moment he gave the gift to her, Elizabeth wrote: “I got out and put my arms around him, and he said, ‘Wait a minute, don’t joggle your tiara.’ Because I was wearing the tiara he had bought for me in the pool!

“He was holding a red leather box, and inside was a ruby-and-diamond bib necklace, which glittered in the warm light. It was like the sun, lit up and made of red fire.

“First Mike put it around my neck and smiled. Then he bent down and put matching earrings on me. Next came the bracelet.

“Since there was no mirror around, I had to look into the water. The jewelry was glorious, rippling red on blue like a painting. I shrieked with joy, put my arms around Mike’s neck, and pulled him into the pool after me. It was a perfect summer day and a day of perfect love.”

An item truly fit for Hollywood royalty, this pearl was once owned by Mary Tudor and later Spanish Queens Margarita and Isabel. It can also be seen in Velazquez portraits of both Elisabeth of France and Mariana of Austria.

Elizabeth commissioned Cartier to create a pearl and ruby mount for the piece, adding further to the overall value.