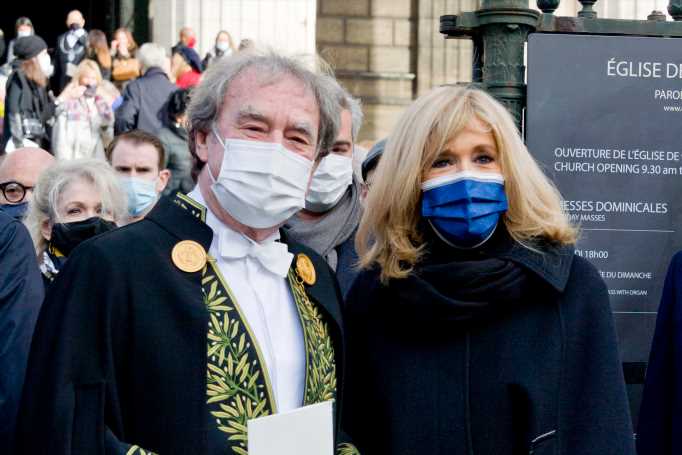 PARIS — Mourners led by French First Lady Brigitte Macron gathered at the Madeleine Church in Paris on Friday for a funeral mass for Pierre Cardin, who died last month at the age of 98.

His great-nephew and heir, Rodrigo Basilicati Cardin, was joined by members of Cardin’s inner circle including Jean-Pascal Hesse, his director of communications; Maryse Gaspard, director of haute couture, and Pierre Pelegry, director of Maxim’s restaurant.

Basilicati Cardin, who was named chief executive officer of the Cardin brand last October, said Macron had requested a meeting with his great-uncle, whose headquarters are across from the Elysée presidential palace in Paris, shortly before his death, but Cardin was too ill by that time to see her.

“I thanked her for being here today to represent France. I felt she was sincere,” he told WWD after the ceremony. “I think Pierre Cardin deserved it, because he represented French couture worldwide. He always said that France made him who he was, so I thought it was very kind and decent of her.”

Meanwhile, members of the Académie des Beaux-Arts, known as Immortals, donned their ceremonial jackets, embroidered with olive branches, to bid a final farewell to Cardin, who in 1992 became the first fashion designer elected for life to the prestigious institution.

Hesse said the family chose the Madeleine church, built in the 19th century in the style of a Greek temple, because it was one of the first places that Cardin saw when he arrived in Paris after World War II. After becoming one of France’s wealthiest men, he bought up a large chunk of real estate in the neighborhood.

Cardin died on Dec. 29 and was buried in a private ceremony at Montmartre cemetery on Jan. 2, alongside his longtime business and life partner André Oliver.

He was laid to rest in his academician’s uniform, holding the ceremonial sword he designed for his induction, incorporating a spool of thread, the eye of a needle and a thimble — a nod to the record three Golden Thimble awards he won for his haute couture collections in 1977, 1979 and 1982.

Inside the Madeleine church, where white flowers framed the marble altar topped by a statue of Mary Magdalene, seats were socially distanced due to ongoing restrictions designed to limit the spread of the coronavirus. Four singers, backed by the church’s celebrated pipe organ, performed music by Mozart, Schubert and Bach.

Two members of the Académie des Beaux-Arts, writer Jean-Marie Rouart and composer Laurent Petitgirard, delivered tributes to the Space Age designer who conquered the planet with his myriad licenses and fashion shows in exotic destinations, including the Gobi desert.

“He was one of my idols, he made me dream,” Jacquemus said. “Discovering his creations gave me a lot of joy. I came to pay homage to him one last time.”