Two years ago, the Business of Fashion (BOF) interviewed Kim Kardashian West and her "momager" Kris Jenner, about the family's leap from reality-TV stars to fashion and beauty moguls.

Host Imran Amed asked the pair whether their business ventures, which include skincare, make-up and clothing, could survive without their hit show, Keeping Up With the Kardashians. Kim responded bluntly: "Social media is its own show." 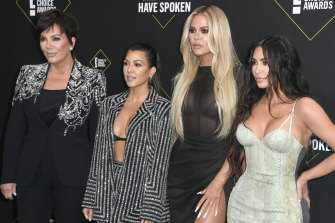 With 188 million followers on Instagram and 66.6 million on Twitter, Kim is one of the most visible women on the planet. So this week's announcement that the family will cease its reality series after the 20th season is by no means a "goodbye" but more an acknowledgement that the show has served its purpose. That is, launching a business empire that has, many would argue, eclipsed the value of the TV show to their brand.

The show premiered 13 years ago, when Kim was better known as the assistant to hotel heiress Paris Hilton (the pair visited Australia together in 2006 and were famously mobbed on Bondi Beach) and the subject of a leaked sex tape with rapper Ray J. So how did Kim – and indeed the wider clan, including her half-sisters, Kendall and Kylie Jenner – go from being just another case of "famous for being famous" to a style icon who has been on the cover of Vogue eight times? 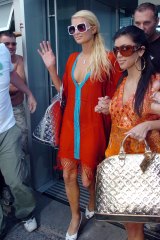 For one thing, Kim, who married rapper Kanye West in 2014, turned existing beauty standards upside down. In that 2018 BOF interview, she said: "I don't really look at the traditional forms … I do what I want to do. I have always been really confident in the image I want to put out there."

Stylist and shoe designer Lana Wilkinson says the Kardashian sisters – Kim, Khloe and Kourtney – have smashed various antiquated ideals about beauty. Kim and Kourtney are both about 155cm tall, while none of the sisters are a standard sample size.

"When we were growing up [in the 1990s], our fashion influencers were supermodels, 'heroin chic'," says Wilkinson. "Then you have these girls. No matter what you think about them … the generation growing up has seen them loving their curves."

Just prior to their marriage, US Vogue editor-in-chief Anna Wintour received major backlash when she made the decision to feature Kim and Kanye on the cover of the style bible. High-profile women, including the actress Sarah Michelle Gellar, threatened to cancel their subscriptions. Others dismissed the couple as vulgar and having no place in high fashion. But Wintour stuck to her guns, later saying it would have been a "misstep" for Vogue to ignore that "Kim and Kanye were a part of the conversation of the day".

Vogue Australia editor-in-chief Edwina McCann faced a similar dilemma in 2015, when considering Kim for her first solo cover. After seeing an episode of Keeping Up With the Kardashians, McCann admits she was reluctant. "At that stage, I hadn't met her and I really did debate whether it was the right decision," she says.

McCann decided a phone call with Kim would be the clincher. "We talked about what [the cover] meant to her and what she hoped to do with it," McCann says, adding that she was impressed with Kim's "savviness as a businesswoman" during the hour-long conversation. "Maybe they know the way to play the game better than I did but she came across as a very considered and kind person, and a humble person, and that’s not what I was expecting at all."

The gamble paid off and the Kim cover was a success for Vogue Australia, as was a subsequent one, in 2016. But it was the September 2018 issue featuring Kim's younger half sister, Kylie Jenner, that ultimately became the fastest- and best-selling issue of Vogue Australia in the magazine's 60-year history.

McCann says the Kardashian-Jenners, along with supermodel sisters Bella and Gigi Hadid, are the "ultimate influencers" in the fashion and beauty space of the era. And while the pandemic has substantially disrupted social media, McCann doubts "we will ever see influencer superstars like this again". 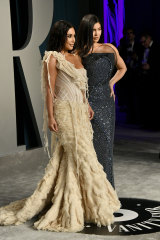 Kylie Jenner (right, with Kim Kardashian) has become one of the family’s highest earners after selling a majority stake in her cosmetics business.Credit:Getty Images

From TV 'trash' to tycoons

By any calculation, 2019 was a big year for the Kardashian-Jenners. Kylie Jenner, then 22, sold a 51 per cent stake in her Kylie Cosmetics brand to beauty giant Coty for $US600 million ($824 million), and is now thought to be expanding into baby and hair products, based on trademark applications filed with US authorities.

Kim has KKW Beauty and a shapewear line called Skims which, despite attracting a cultural-appropriation controversy over its original name, Kimono, reportedly sold $US2 million in product within minutes of launching. Adding to these powerhouses, Khloe Kardashian has Good American, a size-inclusive denim brand; Kendall Jenner is one of the world's top-earning models and is also launching a self-care brand; and, by extension, there is Kanye West's Yeezy clothing brand, as well as earnings from his various music interests.

And we mustn't forget Kanye's political aspirations (he signalled his intention to run for US President this year but his candidacy is unlikely to cause much more than a distraction or diversion in the states where he is eligible to run), while Kim has become a criminal-justice advocate and is completing a law degree. McCann wouldn't rule out Kim making a tilt at a political career at some point either.

And although Kris Jenner has shrewdly steered her children into fame and fortune, many agree it is Kanye who takes most credit for his wife's elevation from fringe to front-row in the fashion world. In one 2012 episode of Keeping Up, West brings his then stylist, Renelou Padora, to Kim's to give his then new girlfriend's wardrobe a makeover. Kanye's other style confidantes, including McCann's fashion director at Vogue Australia, Christine Centenera, have also played a role in shaping Kim's signature minimalist, tonal look.

Beyond her own image, Kim has wielded her immense reach to "turn something that may have been on the fringes in terms of high fashion and … make the whole world aware of it", according to McCann.

Stephen Wigley, associate dean of Fashion Enterprise at RMIT University, agrees. He believes the Kardashians' "key contribution" to fashion has been elevating the athleisure trend into the mainstream. "Some designers might be a little snobby or … reticent to fully acknowledge the role they play but inevitably they play a very powerful role," he says.

In the same way as the Duchess of Cambridge or Meghan, Duchess of Sussex can move product, the Kardashian-Jenners have made an impact on brands, even by posting a single image on social media. Just this week, Kylie posted a photo of herself wearing a tracksuit designed by Australian brand Atoir in collaboration with influencer Rozalia Russian to her 195 million followers. Unsurprisingly, sales skyrocketed.

"We know they are huge lovers of Australian brands," says Russian. "Their stylists wear a lot of Tony Bianco and Bec & Bridge … so that’s a real positive in such a hard retail time."

By mixing couture brands such as Givenchy and Thierry Mugler, famous for Kim's "wet look" dress at the 2019 Met Gala, with fast-fashion brands such as Missguided and Pretty Little Thing, the Kardashian-Jenners have shaken some of the snobbery surrounding fashion and, by doing so, made themselves more relatable to their legion of fans.

Russian says although the Kardashian-Jenners will always have their critics, their influence over fashion cannot be downplayed. "You need to put your opinion aside in terms of whether you like them or not and have a look at the numbers … You can't deny they're hard working," Russian says.

"Would I look up to them for life advice? Maybe not. But in terms of beauty and fashion, name someone who's more influential."