A SINGLETON has revealed she was mortified after going on a disastrous first date – straight out of the scene of a rom-com.

Scottish TikTok user Viv had her very own How To Lose a Guy in 10 Days moment on a trip to the movies. 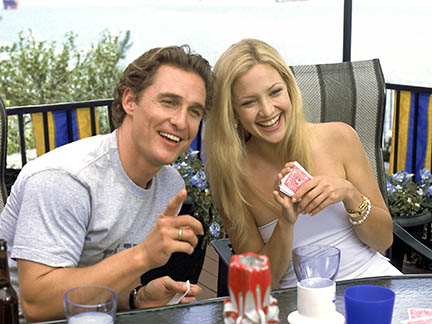 In a short video, she said: "Worst first date story.

"So I was going to the pictures with a guy. I stupidly said I would drive and I had to pick him up from the pub. He was already half cut when he got in the car.

"Got to the cinema, he paid us in, bought us the ice blasts and popcorn. I thought that was nice.

"We get into the film, the place was mobbed and he’s like ‘want to sit in the back row?’

And it only got worse from there.

In the movie, it is Kate Hudson's character's incessant chatting in the cinema that lands Matthew McConaughey's Benjamin Barry in trouble with the man in front of them.

But for Viv, she just had to sit and watch while her date spoke over the movie and then challenged the "huge guy" sitting in the row in front when told to be quiet.

Room in a room

She added: "Sat down and he starts talking at full volume but it was only the trailers so I was like ok, he’ll stop when the film comes on.

"But he didn’t. He continued to speak at full volume.

"Guy in front of us turned round and said ‘excuse me pal, want to shut up? I’m trying to watch the film.

"So he’s like ‘right, outside’. This guy in front of us was huge. Picture the guy from How To Lose A Guy in 10 Days in the scene from the film.

"He’s got him outside with his head up against the wall, hands round his neck and his wee legs are dangling like this.

"He says to me ‘is this your boyfriend?

"He said 'make it your last hen, get shot of him'.

Social media users were left in stitches by the date fail.

One said: "The signs were there when you had to pick him up from the pub. Lucky escape."

Meanwhile, a third added: "This is the best story ever."

And to everyone's surprise, Viv still gave her suitor a second chance with another date.

She added: "He phoned to say sorry so I felt obliged, it was the nail in the coffin."