A LITTLE black dress is an essential for any wardrobe, but owning just one was never going to be enough for Aimee Adams.

From vintage buys to high street bargains, the fashion make-up artist has collected an astounding 3,000 LBDs over the past 30 years — spending around £75,000. 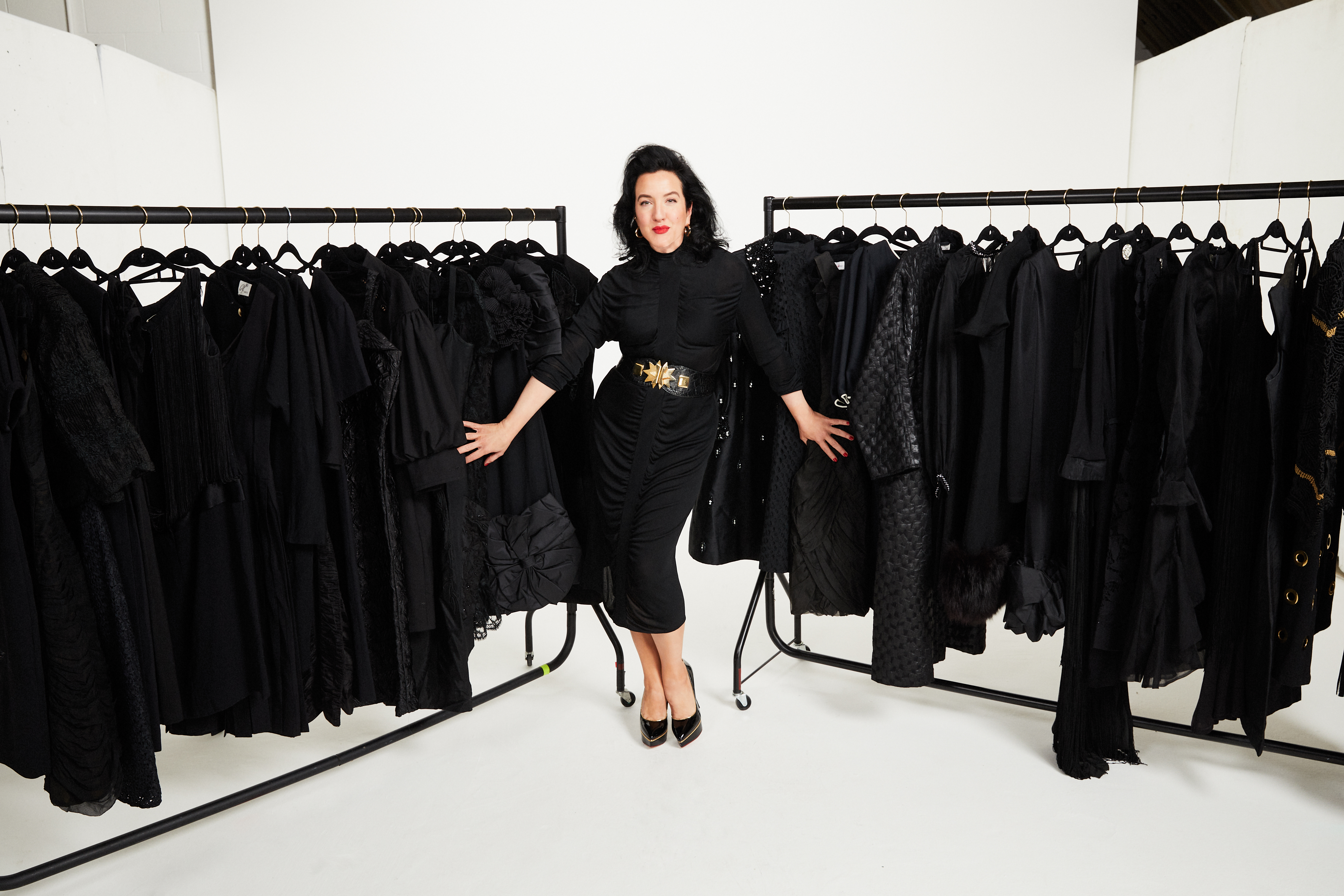 And the 53-year-old is now bang on trend after singer Celeste and presenter Maya Jama wore them at the Brit Awards on Tuesday night. Texas-born Aimee visited London on holiday at the age of 15 and was inspired by the Eighties goth scene, quickly becoming hooked on black.

She says: “That’s when I started wearing black. There was a sea of black on Kings Road in Chelsea, everyone was wearing it and no one would bat an eyelid, that was London and it just spoke to me.

“Black is so chic and so timeless, it makes you look slimmer, you notice your face more. You can wear a little black dress whether you’re 15 or 99 and still look elegant. My favourites are the standout pieces you’d never normally see in a shop.

“One of my most special is a full-length Yves Saint Laurent gown that is covered in marabou feathers and was made in the Seventies. I’ve never actually worn it out.

“One I have is striped with black tulle and ribbon, so it’s part see through. Even though they’re all black they all have detailing that makes them different and unique. I can’t count how many LBDs I have, it’s impossible. It’s 3,000 and probably more.

“People always apologise for wearing black and I think, why? It’s so glamorous and flattering. Don’t apologise for it – embrace it.” 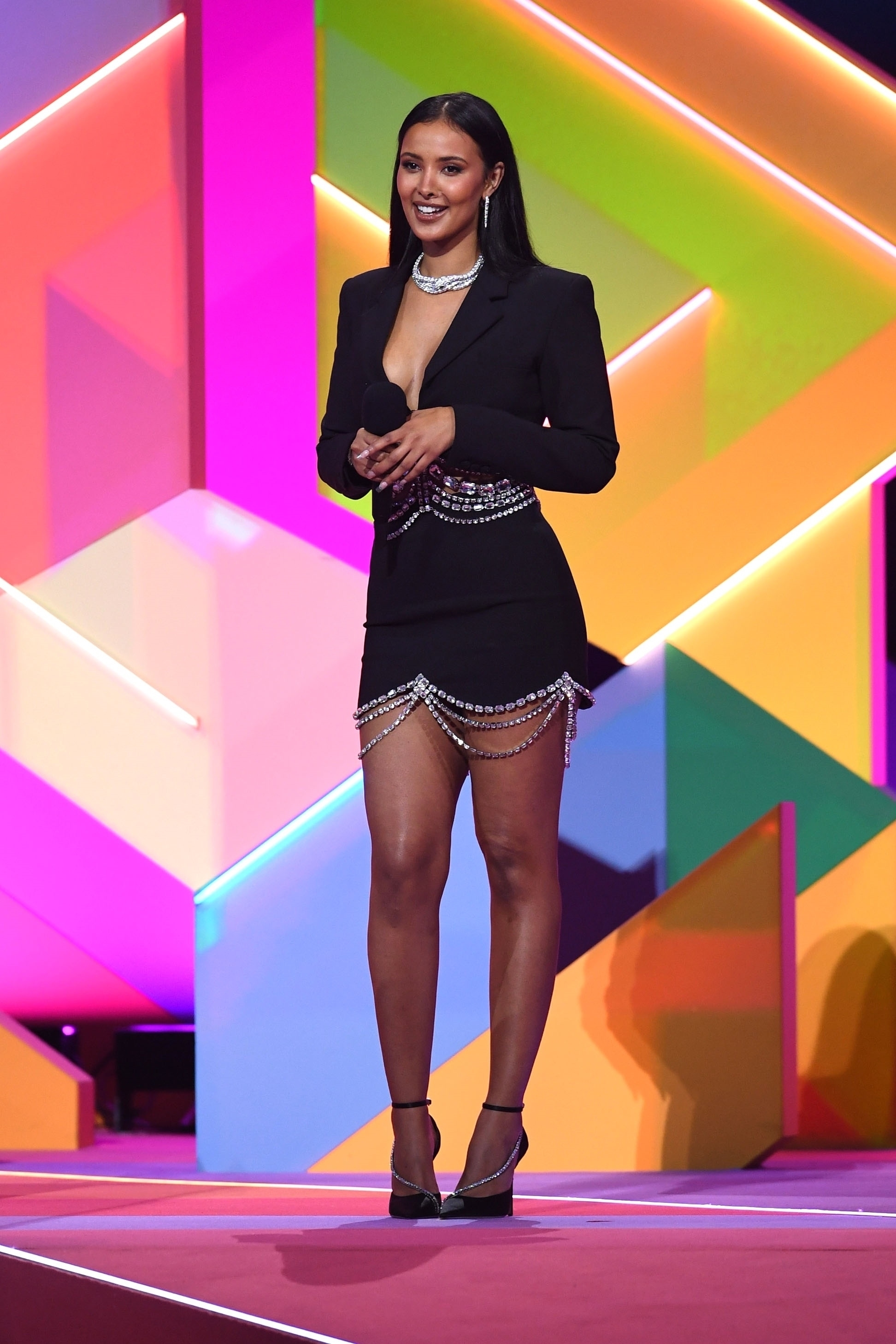 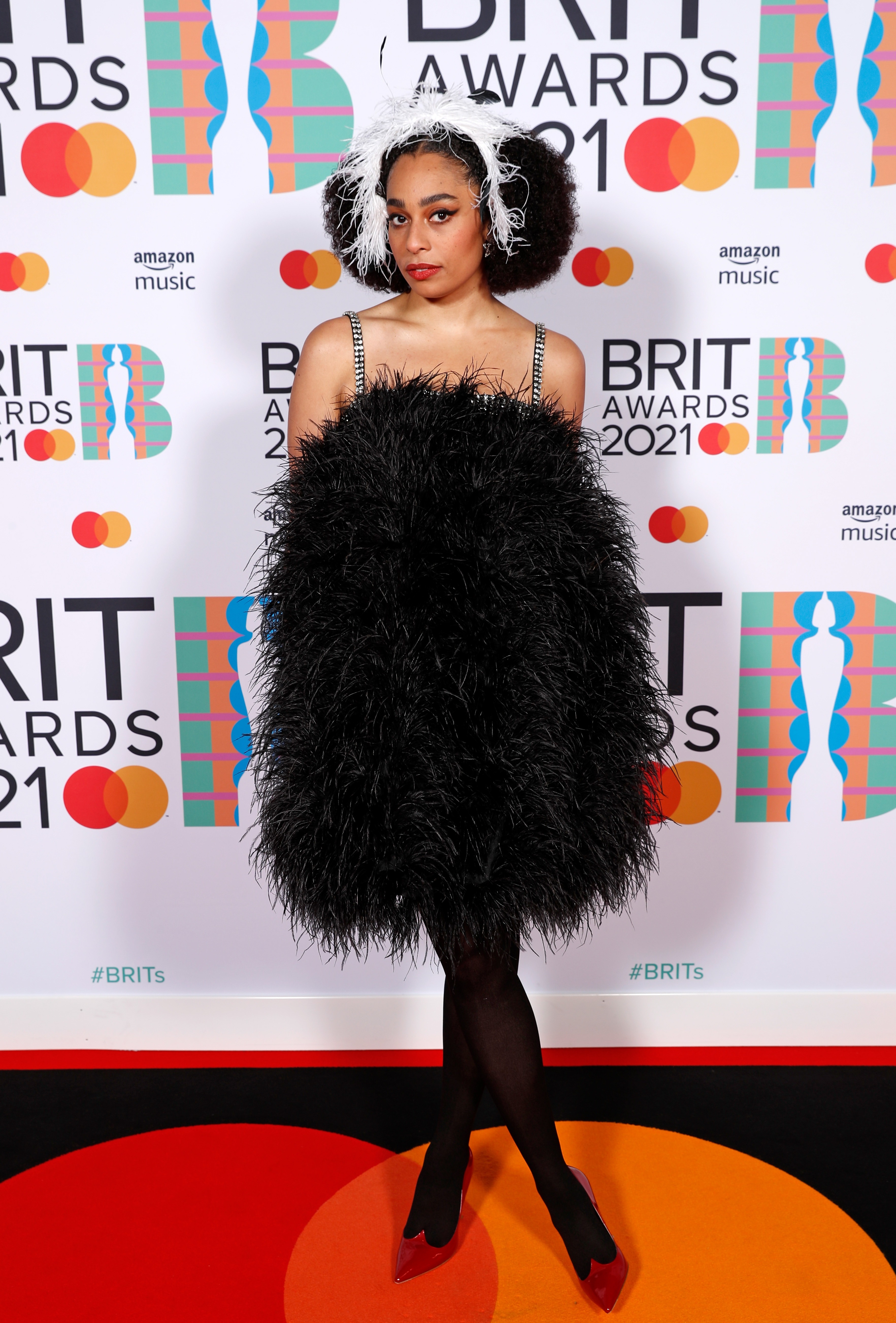 Aimee, who works with Tess Daly on Strictly, lives her life like that of a Forties black-and-white film star. From her clothes to the interior of her house in Bermondsey, South East London, there is no colour in her life apart from her statement red lippy.

She says: “I’ve got hundreds of black slips that I wear around the house, and I love a sheer peignoir gown with a slip underneath. I just think I was born in the wrong decade.” Aimee’s enthusiasm for black is so great, she even wore an LBD at her wedding in 1990.

She says: “I worked as a sample cutter in the early days and only made £20 a day so I bought a £2.50 black dress from Oxfam, pleated in tiers like a 1920s flapper, to go with my heavy fringe and dark bob. I didn’t dream of the Disney style, white wedding, big dress — it just wasn’t my dream. And black represents me, it’s a part of who I am, I didn’t want to be a different person on my wedding day.” The marriage lasted seven years, the love affair with the LBD continues.

After buying thousands of dresses, Aimee was running out of room in her house so rented a storage unit for £200 a month. It means she’s spent upwards of £10,000 on storing her clothes over the years. She says: “It’s fifty square feet and is full of clothes.

“I have it semi-organised, I try my best, but it’s organised chaos that makes sense to me. I do have bags that are labelled — these are all fringed dresses, these are all lace etc. Because it’s stacked up in storage you can’t really get to the back to see what’s in those bags.  But I really want them to go to a good home.”

Her obsession with clothes began as a teenager in the US. Her mum, Betty Lou, who recently died, aged 89, was a shopaholic and hoarder who collected thousands of ornaments and clothes. 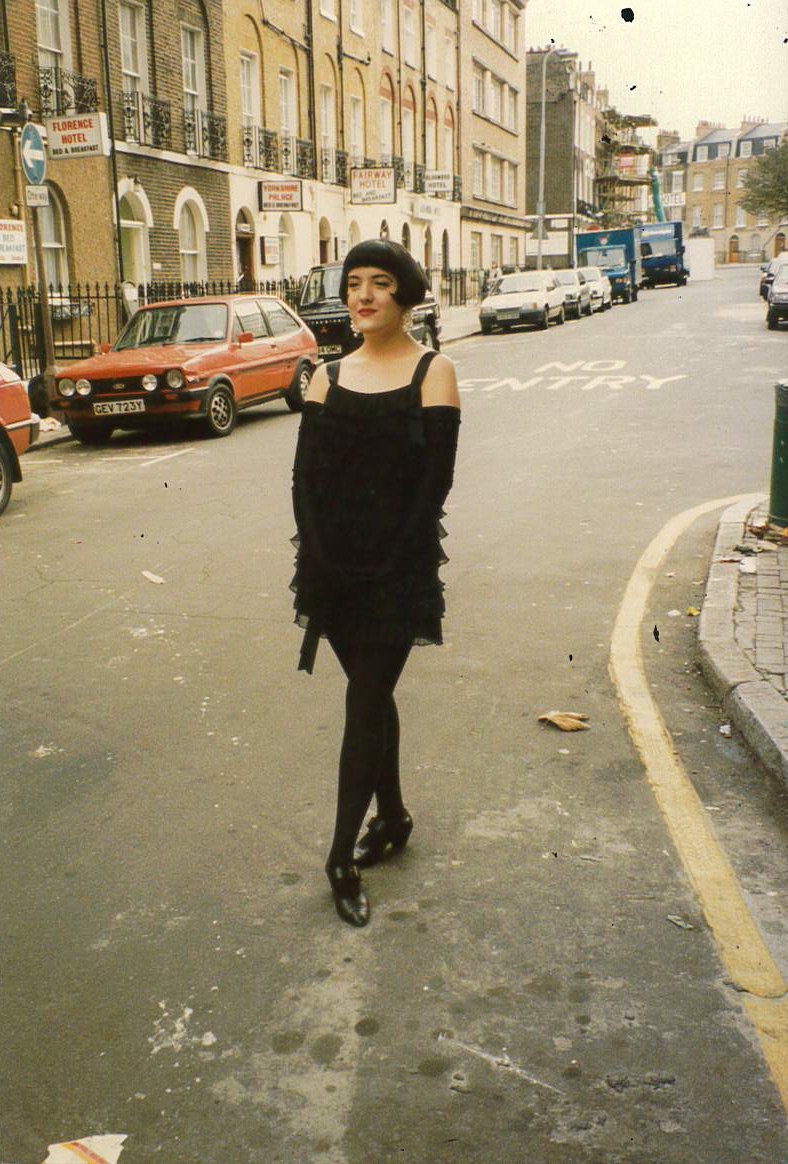 Aimee says: “My mum owned 40 credit cards. She would shop all day at the mall, get home, put on QVC and shop all night long. She always taught me if you see something you love, do not hesitate to buy it straight away, because the remorse when it’s gone is horrific.

“You can always take it back or sell it on. We would go to garage sales from house to house and she taught me how to spot gems. Once there was a silver necklace with a $1 coin on a chain for 25 cents. She said pop that out and you’ve got a dollar.”

Upon returning to the US after her trip to London in 1983, Aimee’s change of style from preppy to goth did not go unnoticed. She says: “I came back to Texas with big black spikes, black lipstick, black clothes, and everyone said, ‘What the hell has happened to you?’.”

Her mum sent her to a women’s college in Columbia, Missouri in 1985 to study fashion design. She says: “People there would see me on the street in black and leather and shout, ‘It ain’t Halloween honey’, because no one else looked like that — so much so the local newspaper did an article on me.”

But London was calling. Aimee bagged a place at the London College of Fashion for a term, but ended up staying for the next 33 years and counting. She says: “I changed my course to do special effects/film make-up, which is how I came to be a make-up artist.

“I’ve always had this affinity with fashion and black. I saw the blood, guts and gore (in special effects) and wanted to be a part of that.” She spent her time sifting through vintage shops and going to Portobello Market in Notting Hill, West London, to find more and more black frocks. 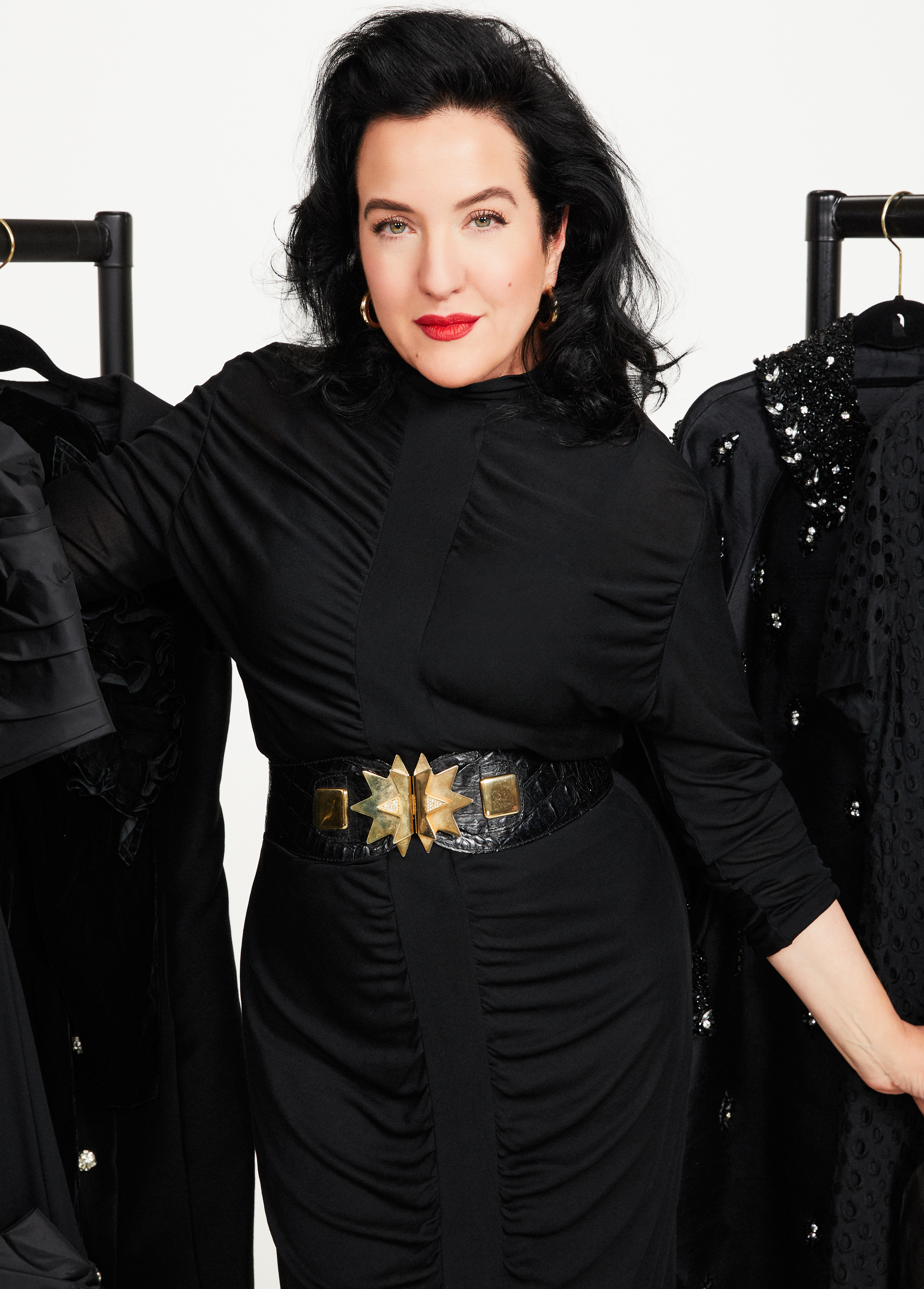 Aimee says: “When eBay launched I just lost my head. I would buy things every day. Once, on a work trip, everyone had finished for the day and were going out for dinner, but I was sitting in a car in the rain on my laptop going through eBay waiting to bag a dress.

“It was almost like a drug and it got a bit out of hand. I would go home back to my parents in the US for Christmas and I’d rent a trailer for the car to tow sometimes 13 bags full of vintage clothes to the airport to take home to London.”

After studying fashion and the history of costume, Aimee — who owns dresses made by Balenciaga, Dior, Mary Quant and Valentino to name just a few — would see designer gear being undersold in charity shops and online.

She says: “At one point I got very into vintage fur coats and I saw one by Elsa Schiaparelli, a contemporary of Coco Chanel. “Someone in Kentucky was selling this coat for $20, so I remember buying it and later I took it to a dealer in Knightsbridge and he sold it for £2,000 and gave me £700.
“I thought, ‘Why am I not doing this?’.

But it’s not all vintage designers, Aimee goes to the high street and picks up cheaper frocks. She says: “Jazz it up with an amazing belt and great earrings and all of a sudden you look expensive but you haven’t spent much money.”

But with her thousands of LBDs, Aimee says: “I’m at a point where I think, ‘Let’s sell these things’. My ideal aim would be to sell them on pre-owned fashion site Vestiaire Collective because they check everything and make sure all the buyers, sellers and designers are authenticated.” 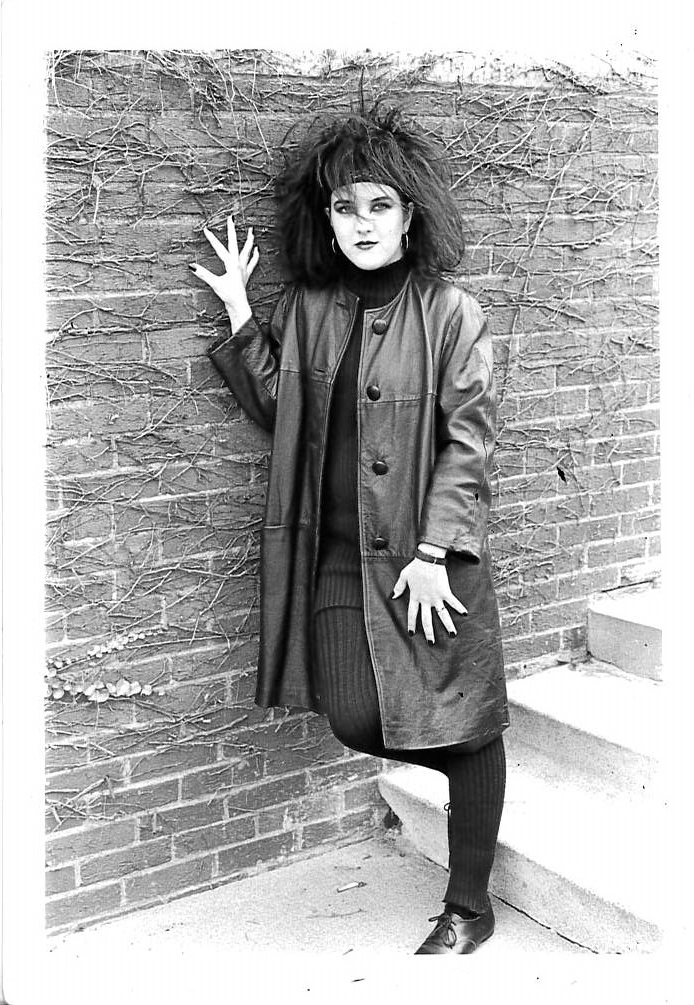 But she won’t be parting with all of them. Aimee says: “I do have a few that I think I’ll keep.

“In my head, I live this lifestyle of some grand dame, red carpet living, but really, where am I going to wear them to? Tesco?”

Her biggest conundrum though is choosing what outfit to be buried in. “To be honest,” she says, “I’d rather have my ashes turned into a black diamond.”