Kate, Duchess of Cambridge, 38, and Prince William, 38, were the first royals to carry out an engagement at Buckingham Palace since lockdown on Wednesday. The day after Queen Elizabeth II, 94, returned to Windsor Castle from Sandringham, William and Kate met President Volodymyr Zelenskyy of Ukraine and his wife First Lady Olena Zelenska.

The engagement took place in the throne room at Buckingham Palace and was deeply significant for several reasons.

The pandemic has caused the Queen to shift her main base from Buckingham Palace to Windsor Castle going forward.

While the Queen is still expected to commute to the capital for some royal engagements she will live at Windsor for the foreseeable future as i is deemed a safer base during the coronavirus pandemic.

Kate and William’s latest engagement was significant because it saw them symbolically step up to their future roles as King and Queen Consort. 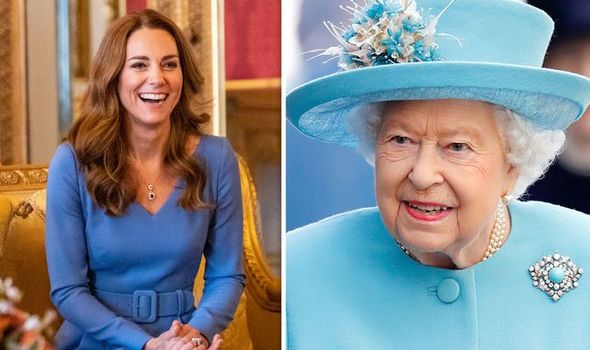 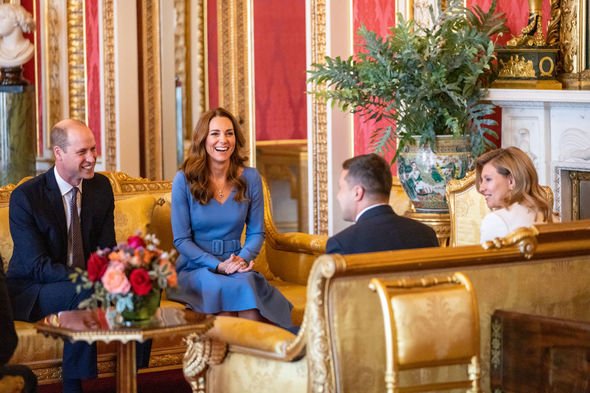 With the Queen now based at Windsor Castle, the couple completed the engagement on her behalf.

Last week Buckingham Palace confirmed a dramatic shift in the Queen’s royal schedule with all large-scale engagements called off until 2021.

This means the Queen will not hold audiences or carry out investitures until next year.

Kensington Palace tweeted a photo of Kate and William’s meeting on Wednesday with the caption: “Today The Duke and Duchess of Cambridge held an audience with President Volodymyr Zelenskyy of Ukraine and First Lady Olena Zelenska, at Buckingham Palace.” 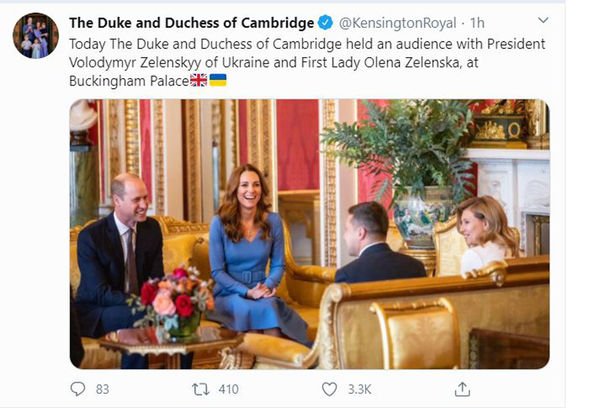 Kate’s blue outfit was designed to send a supportive message to the Queen.

She wore a royal blue dress – not only is blue the Queen’s favourite colour but its a shade deeply-rooted in royal history.

By wearing blue, Kate seemed to reassure the Queen that she is confident in the royal role that lies ahead of her.

The history of royal blue

The “royal” in royal blue comes from England, where the hue was said to have been created for a competition to make a dress for Queen Charlotte (1744—1818).

The shade of blue associated with the name has actually changed over time.

Before the 1950s, royal blue was considered to be much darker.

In the late 1980s, the World Wide Web Consortium — which is the international group for web standards — matched this brighter blue, along with its RGB code, to the name “royal blue”. 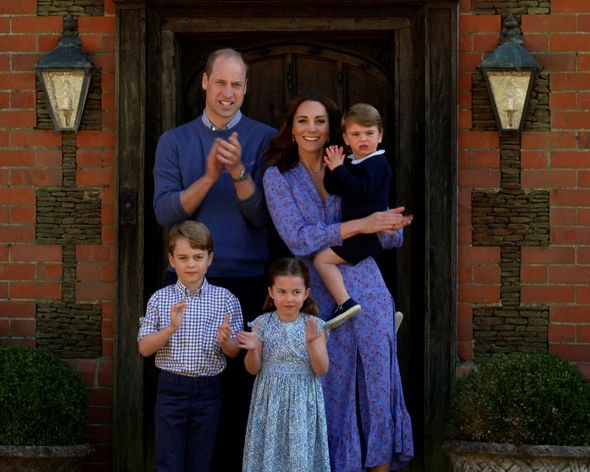 Queen blue is a medium tone version of royal blue, with a more subdued effect, while imperial blue describes a darker shade, close to navy.

Expert Richard Fitzwilliams told Express.co.uk: “It is highly significant that William and Kate have hosted the first royal engagement at Buckingham Palace since lockdown.

“Buckingham Palace is undergoing a much needed and extensive refurbishment and is the headquarters of our monarchy.

“It is the best known royal palace in the world.

“William and Kate’s meeting with the President of Ukraine and his wife at the Palace was timely, and will hopefully be a precursor to many more activities there in the coming months.”