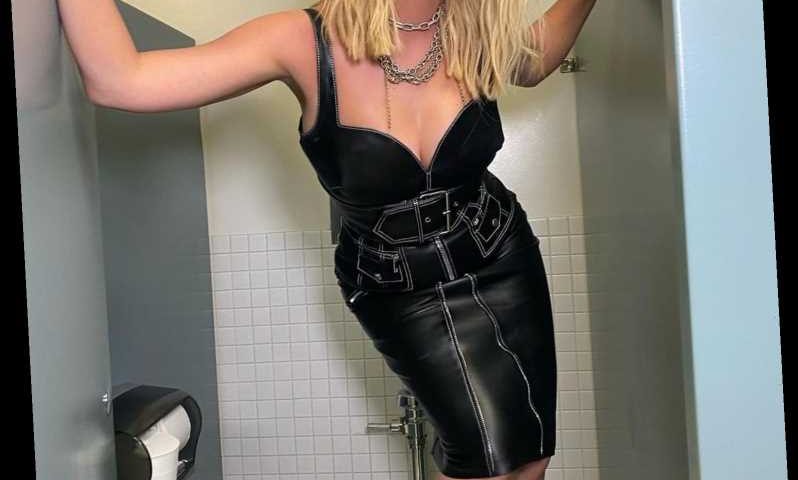 Leave it to Katy Perry to turn an ordinary bathroom stall into a glam "runway."

The singer, 36, recently showed off her figure in an unlikely place — the American Idol bathroom — as shown in an Instagram post she shared on Monday night.

In the photos (one of which shows the star standing on a toilet, in black strappy stiletto heels!), Perry rocks a somewhat biker-chic ensemble, including a belted leather black dress with a plunge neckline, accessorized with several chain necklaces.

"You know I ♥️ a fashun bathroom mome 🚽 Turned the #AmericanIdol bathroom into a my own runway 💅🏻," the "Never Really Over" singer wrote.

"Dont be a pooper, and tune in to the 2nd part of solos + celeb duets tonight," Perry added in the caption of the three-photo series. From Dumbo's Mom to Toilet Paper: 19 Things Katy Perry Has Dressed Like Through the Years

Perry hasn't been one to shy away from head-turning style moments over the years, from the super sexy to the downright unprecedented.

In May, the pop powerhouse gave fans and followers a glimpse of "what could have been" in terms of her 2020 Met Gala look. (Originally scheduled for May 4, the annual event was postponed indefinitely due to the COVID-19 pandemic.)

"#TheMetBall2020💔" Perry wrote on Instagram alongside a photo of a Jean Paul Gaultier cone bra corset, which was show modeled on a pregnant mannequin.

The 13-time Grammy nominee isn't afraid of being open about some of the not-so-glamorous sides of new motherhood, either.

In October, she participated in the Exercise That Vote campaign to encourage viewers to vote during the 2020 presidential election, using a breast pump while looking over her shoulder and insisting that those watching "get pumped … to vote."

During Sunday's All-Star duet episode of Idol, Perry told contestant Cassandra Coleman, "As a new mother, I don't have very much time, so I've quit shaving my legs. But when you sang, the hair on my legs grew an inch an a half. Full-body chills! It was amazing."

To prove her point, Perry raised her legs up on her judge's table so the camera could take a peek — and fellow judge Luke Bryan confirmed.