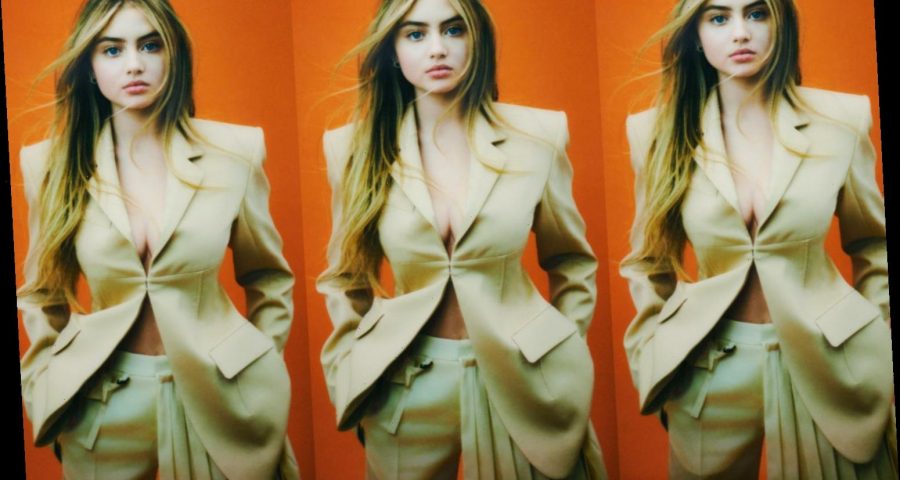 The 16-year-old budding model landed her first solo fashion cover with Glamour Germany in honor of the 20th anniversary issue, exactly two decades after Heidi became the magazine's first cover star in 2001. Leni looked like her mom's mini-me as she struck a pose in a floral-print dress with voluminous sleeves.

"Thank you to everyone who made my first solo cover so special. It's an honor to share this with my mama @heidiklum who was Glamour Germany's first ever cover model," Leni wrote on Instagram with a photo of the cover. Heidi, 47, posted the cover image on her Instagram writing, "Couldn't be more proud of you @leniklum ❤️."

Also on Thursday, Leni shared a peek of herself getting ready on set and shared a clip of mom Heidi sneaking into her dressing room to say hello.

As she was getting her makeup done, Leni was asked when she's most embarrassed by her mom. With a laugh, Leni says it's when Heidi drops her off at school and blasts the volume of the music in the car.

"It's sort of a line to get in and all the kids are all sort of there. So I open the door and she makes sure to turn the volume up all the way and starts singing and blasting and rolling down the window and I'm so embarrassed to get out of the car," Leni says. "But she hasn't done that in a while because of online school." Leni shot into the spotlight last year when she made her modeling debut on the cover of Vogue Germany's January/February 2021 issue alongside her mom Heidi. In the cover photo, the mother-daughter duo wear colorful matching pantsuits, sans shoes.

Now that her daughter is "old enough" to model, Heidi is thrilled to her Leni following in her footsteps. "She opened Berlin Fashion Week where I saw her walk for the first time, in heels like as a real fashion model. It's mindblowing to me to watch her work, especially the first thing I did together with her and now she's doing things by herself, even though I go to the set," she told PEOPLE.

"It's amazing to watch her do it all. She's been coming to my sets for her entire life and she's not really afraid of the cameras being stuck in her face. I do Germany's Next Top Model and she's done a lot of the shoots the models had to do. A lot of the times at the end of the shoots, she would be like, 'Now it's my turn!' off camera," Heidi added. "She's done so much over the years, she loves it. She loves it!"