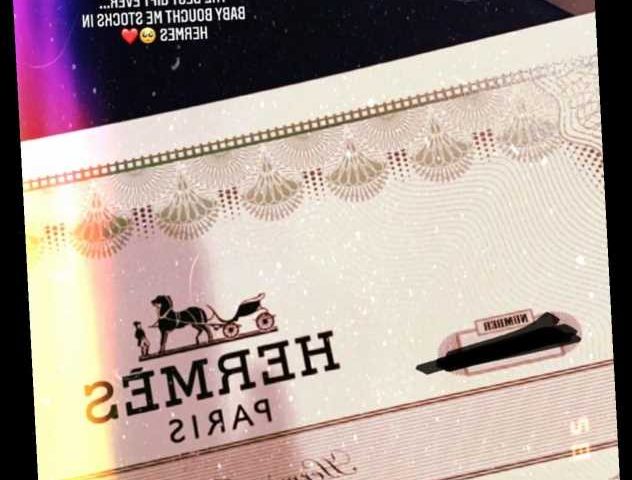 Michael B. Jordan made sure to spoil girlfriend Lori Harvey with a super-special gift for their first Valentine's Day together.

At the end of the couple's romantic, private Valentine's Day dinner that Jordan booked at an aquarium, the actor presented his girlfriend with certified slip showing he purchased stock in luxury fashion label Hermès in Harvey's name.

"The best gift ever…baby bought me stocks in Hermès 🥺❤️," Harvey captioned a photo of the Hermès stock certificate.

Harvey, 24, also gave fans a look at her romantic date with Jordan, 34, on her Instagram Story Monday, revealing that the actor rented out an aquarium just for them — and surprised the model with dinner in one of the underwater tunnels. "My baby rented one the aquarium so we could do a private tour and see the turtles and then we walked into this," Harvey wrote, sharing a video of the tunnel adorned with flower petals and candles.

Jordan also planned an elaborate dinner spread, which included massive bouquets of roses, more candles and a meal from the luxury Japanese eatery Nobu. "And he had Nobu cook dinner for us," Harvey added, sharing a video of the night's menu.

The couple's night ended in a hotel room that was covered in huge flower bouquets, candles and red rose petals scattered around the bed and in a bubble bath. The pair went public with their relationship last month by posting photos of the Black Panther star giving the model a sweet kiss on the cheek. However, it came as no big surprise to fans who have been speculating Jordan and Harvey's romance for months.

In December, the pair were photographed getting off a plane together in Salt Lake City in pictures obtained by The Sun. They also shared snowboarding videos and photos that appeared to be in the same location on their respective Instagram Stories. "It seems they have wanted to get to know each other in private," a source told PEOPLE of the couple. "They have been careful about being photographed together."

"In the past she quickly posted social media pictures with guys that she was dating," said the source. "With Michael she has tried a different approach."