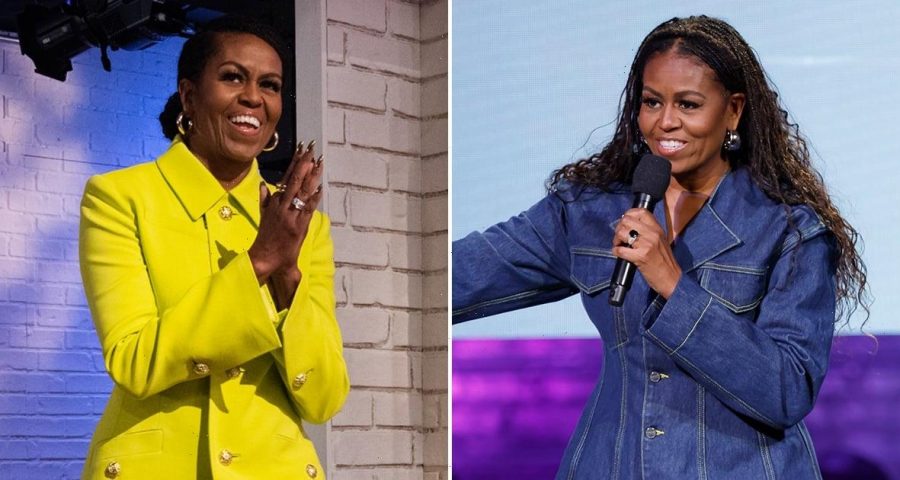 Michelle Obama is ushering in a new style direction. The former first lady, who’s spent the past month promoting her new book, “The Light We Carry: Overcoming in Uncertain Times,” fulfilled press engagements in one bold, unexpected outfit after another. Working with her longtime stylist Meredith Koop, who’s styled her since 2010, Obama donned edgy silhouettes and striking pops of color as she visited a variety of talk shows and hosted discussions in numerous cities.

While the bestselling author has always been a style icon of sorts, her recent fashions signify a different kind of approach. Previously a frequent wearer of structured staples, florals, and timeless prints, Obama experimented with relaxed, fun outfits during her press tour, with notable looks including a chic Canadian tuxedo ensemble from Ganni and a cool Roksanda x Fila jacket over a bright blue one-shoulder bodysuit. As usual, she rocked several eye-catching monochromatic ensembles and tailored pantsuits, with the addition of looser fits and playful streetwear.

Sure, she’s generally enjoyed a more casual wardrobe since her time in the White House, but her looks for “The Light We Carry” tour express more comfort and sartorial exploration than we’ve ever seen from Obama before. There was the printed Marine Serre dress altered into a top, which she paired with wide-leg Balmain jeans, and the leather jacket and matching pants from Palmer Harding. In an interview with Vogue, Koop described Obama’s recent style evolution as “wanting to be more and more comfortable.” “That is huge. That’s like most of it. What’s going to be physically comfortable for her body, for her,” she said.

As we know from her style during the former president’s term, the former first lady is often intentional with any choice related to her appearance. In fact, during the recent press tour, she spoke about avoiding wearing her hair in braids while in the White House, as keeping her hair straight was “a way for her to keep the focus on politics.” Though she didn’t explicitly reference her decisions when it came to fashion, it’s safe to assume her wardrobe followed. And as demonstrated by the likes of Kamala Harris, Jill Biden, and Obama herself, clothing for political events is often purposeful and can send a message.

Now, both her fashion and beauty looks — which include goddess braids and trendy half buns — reflect how she’s embracing her new endeavors as an author of a book centered on “light” and joy. Ahead, take a closer view of her best press tour looks and get insight into all the outfit details.