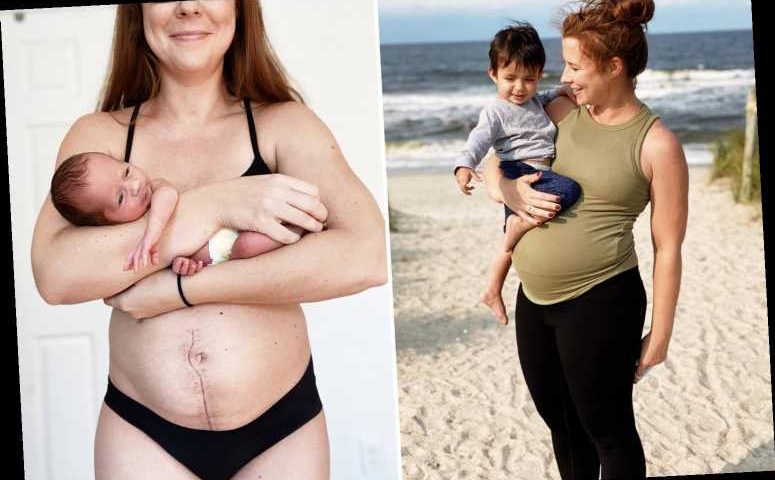 A MUM who had 40 staples in her stomach after an emergency C-section birth has proudly shared pictures of her unusual vertical scar on social media. 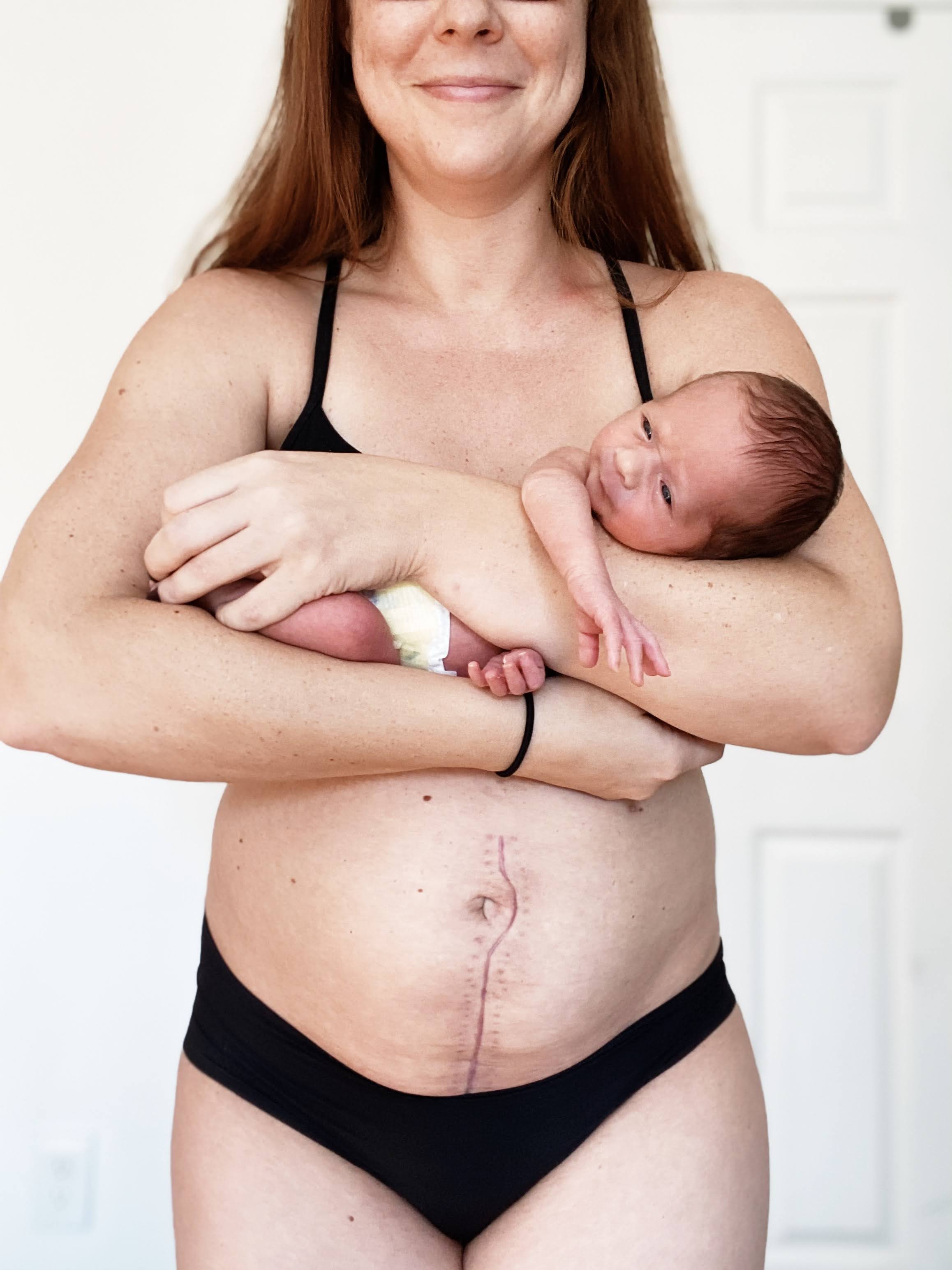 The mum suffered from a complete placenta previa – when the baby’s placenta covers the mother’s cervix – and a suspected accrete – where the placenta affixes to the uterine wall.

Her condition meant the safest way to deliver was via emergency caesarean, with a vertical incision stretching from the base of Erin’s stomach to above her naval, bypassing her belly button.

Although the C-section went well, Remy arrived five weeks early and had to spend 15 days in the newborn intensive care unit (NICU), while Erin was left with 40 staples holding her stomach together and a large scar.

The brave mum decided to be candid with her followers on social media, where she has 28,400 followers, and share the reality of her condition. 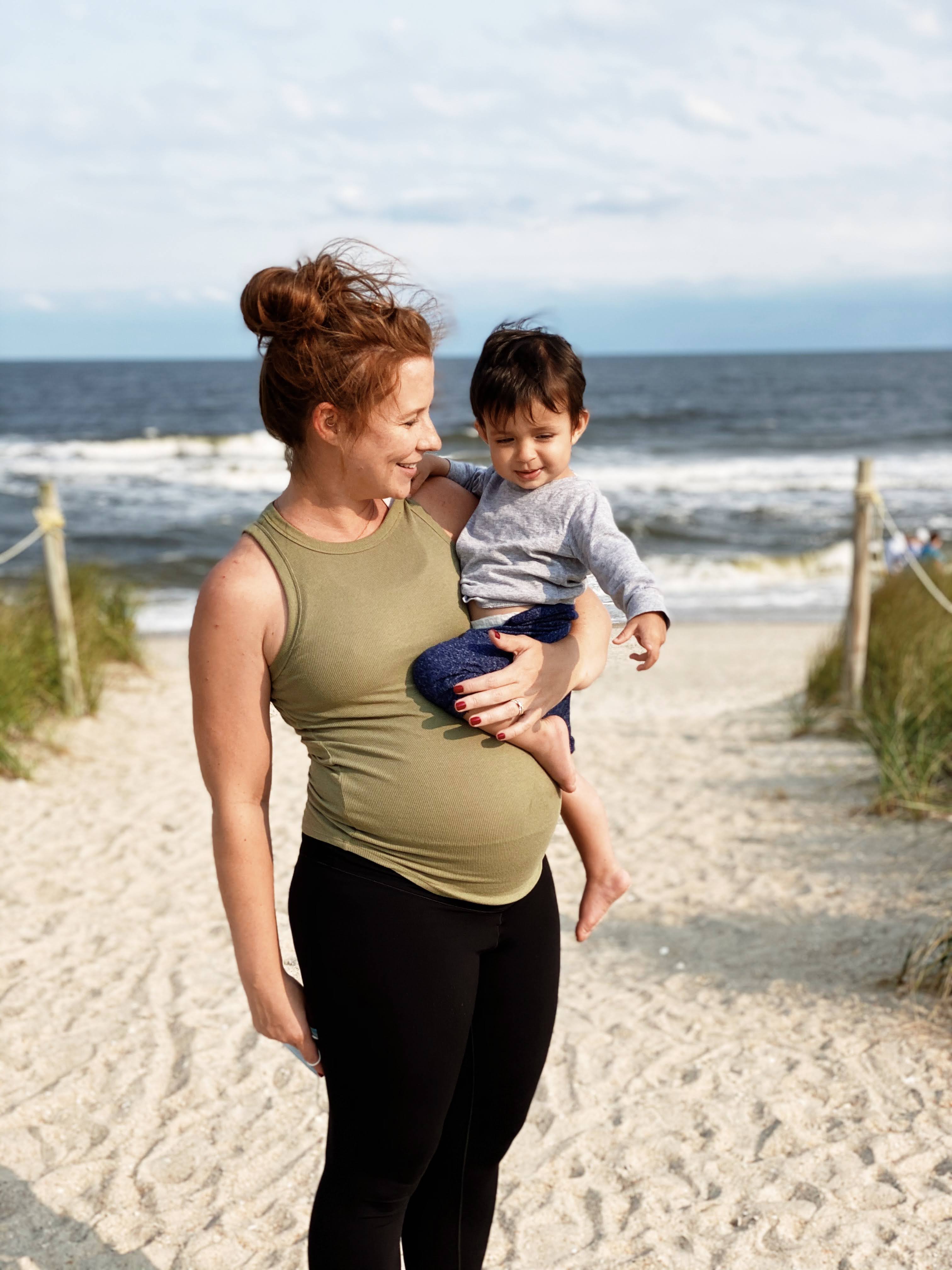 She is now on a journey to self-acceptance and says she feels “proud” of her body and what it has achieved.

“I’m a very visual person so taking pictures of my scar helped me normalise what had happened to my body,” Erin said.

“Sometimes, given all the hormones and sleepless nights, we tend to forget how things were in those early days, so this has been really helpful for me.

“I also wanted to show other women that not every birth is straightforward and that atypical ones should be celebrated too. 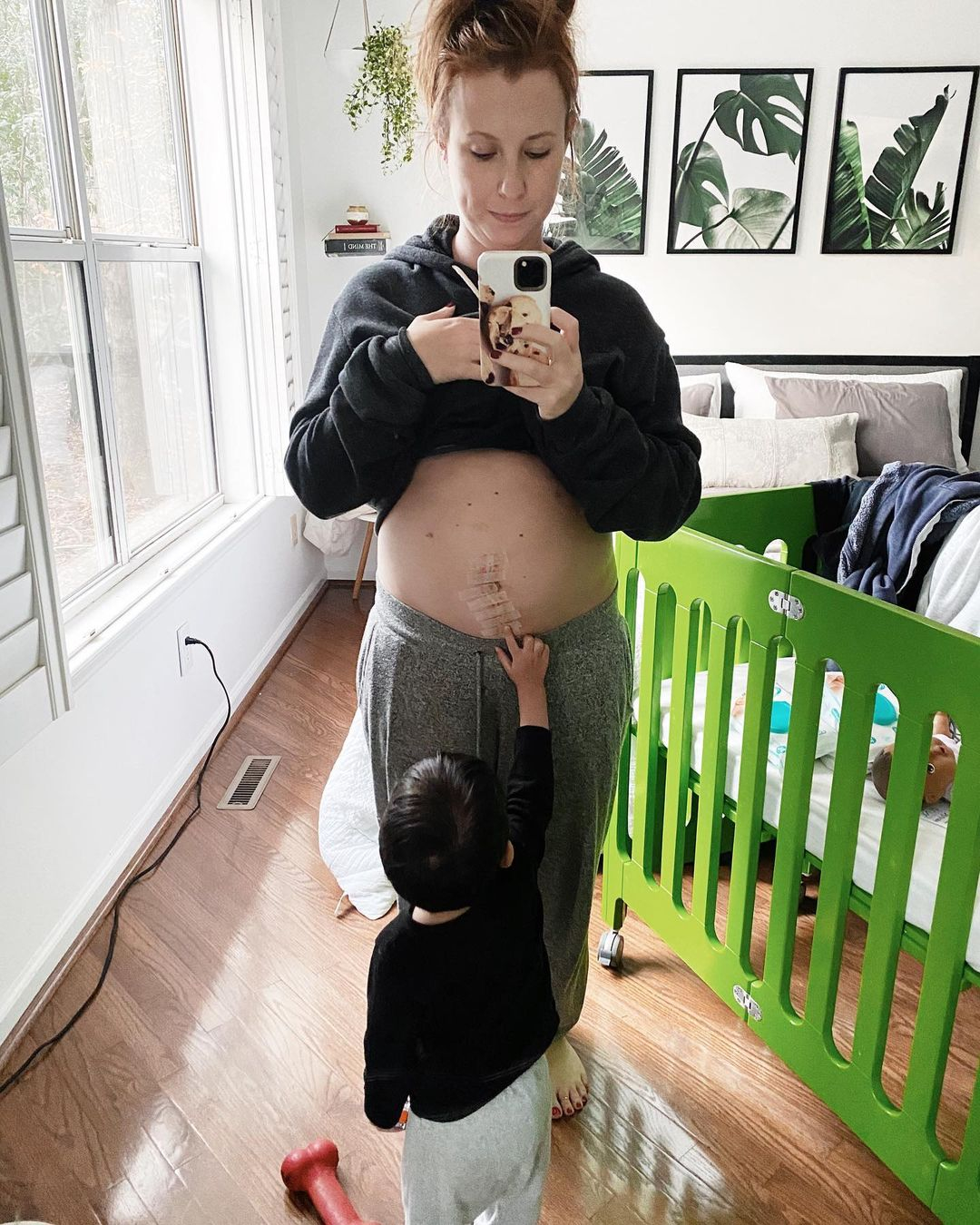 “The scar represents strength to me.

“It amazes me that we are medically in a place where I could be opened up and another life taken out like that. It's my daughter's doorway to the world and I'm very proud of it.

Erin – who is also mum to two-year-old son, Miles, says she's proud of what her body is able to do and wants to normalise her scar in a bid to help others.

Sharing a photo of her scar on social media, she wrote: "Today I'm having 40 staples removed. 40 staples that held me together after an uncertain delivery. 40 staples that allowed me to welcome a tiny new life into this world.

"40 staples that will eventually reveal a scar I can show my daughter as her entrance to this world. Before I have them removed, I want to document them. 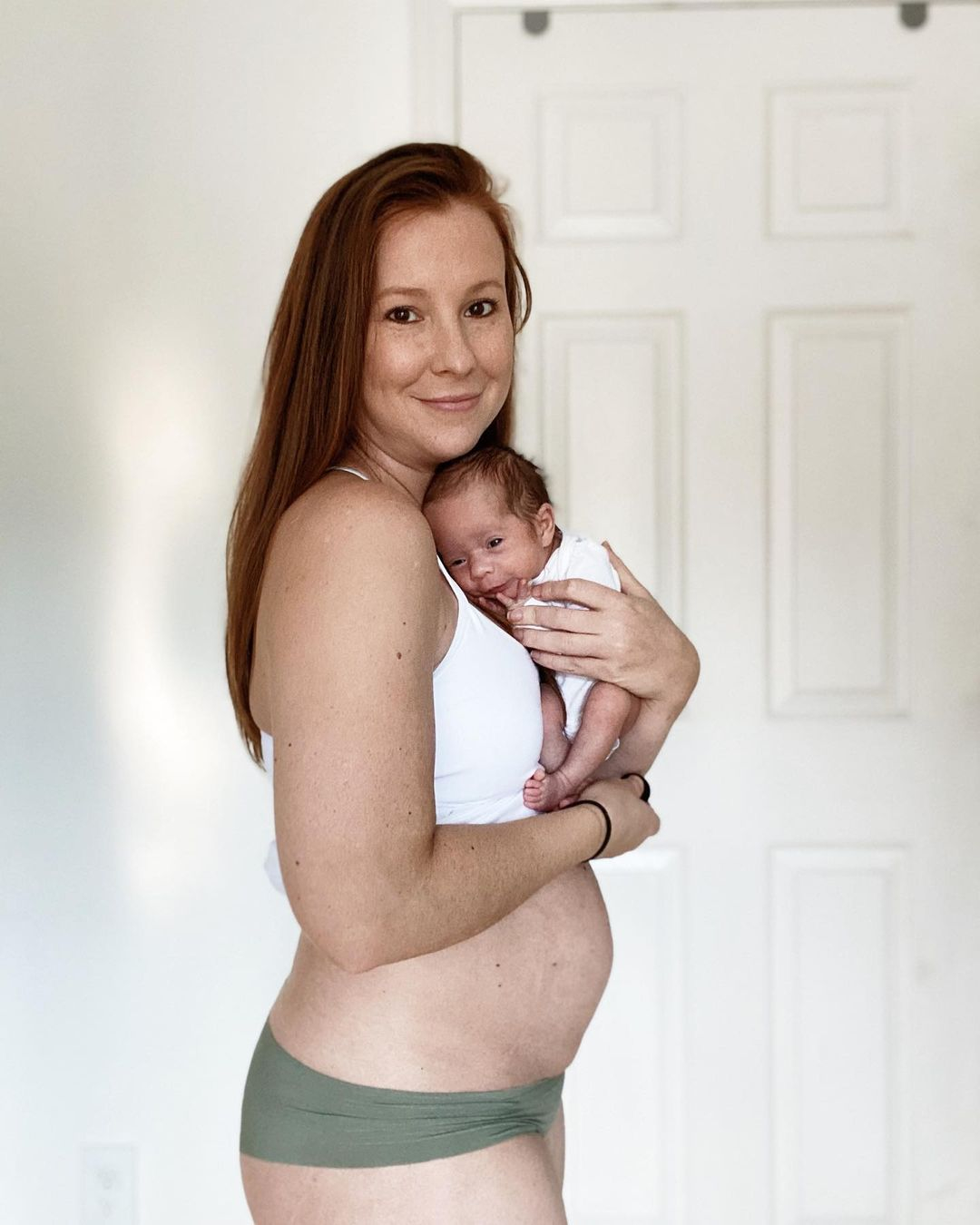 "It's bruises from IVs and emotions that are sometimes more complex than anything physical we may carry with us. It's relearning your own body and realising how amazing it is for what it can do.

"Today I say goodbye to these 40 staples but hello to a forever reminder of an experience that I wouldn't change for the world."

And followers were quick to applaud her bravery.

One person wrote: "I just came here to say that your post made me cry. So proud of you girl – keep shining."

"We are often given a warm, rosy picture of what motherhood and birth are like, and it's been my experience both times that that's not necessarily the case," Erin added. 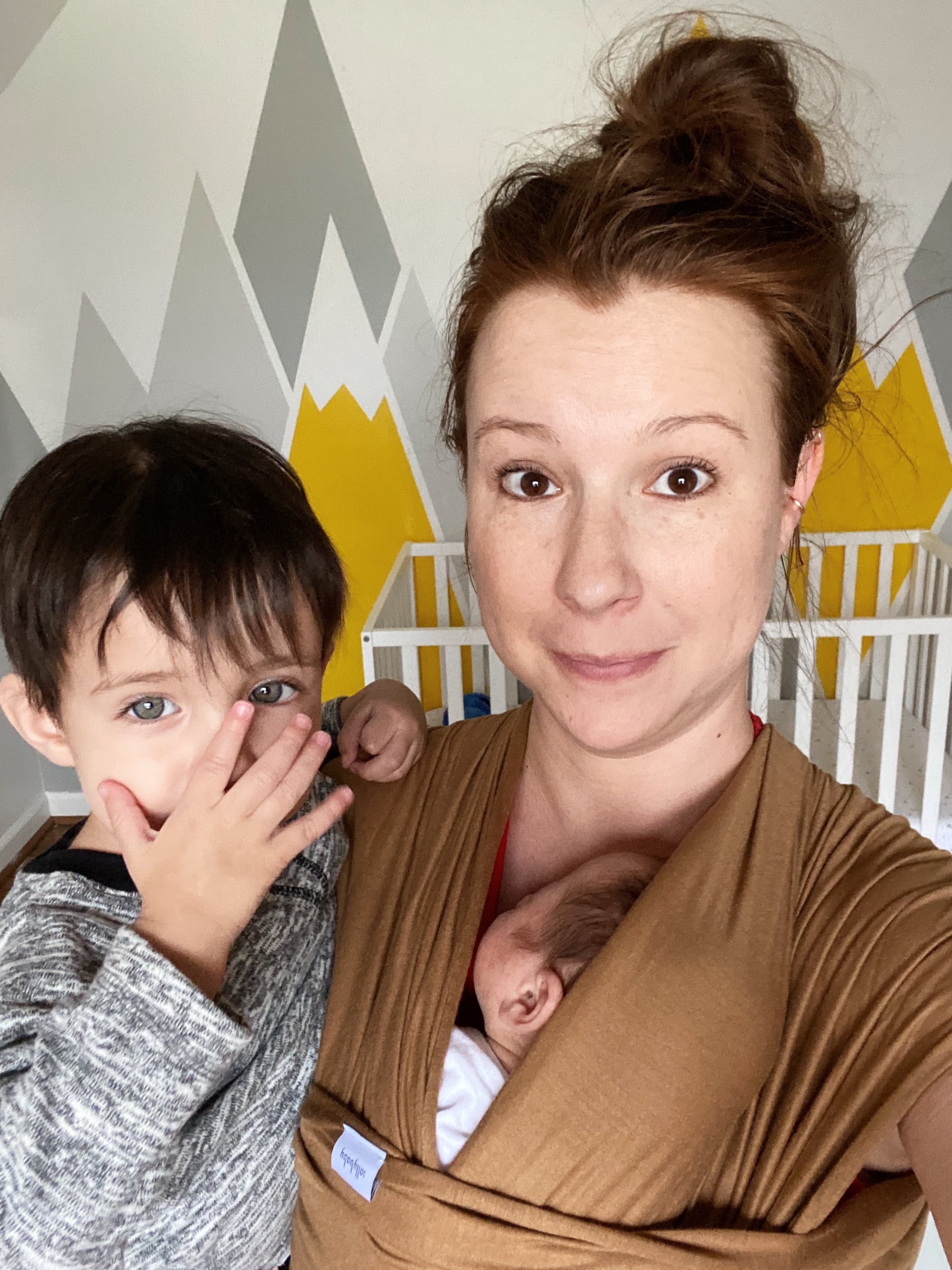 "If all we see are smiling mums and babies, it can be hard for women to reconcile that if they've had a particularly hard or traumatic birth experience.

"I like to talk about the things that people don't talk about. One of the worst things in motherhood is navigating a new space while also feeling like you're 'not doing it right' or that you didn't have the same experience as someone else.

"I want all mothers to feel seen and heard – it's really important to me."