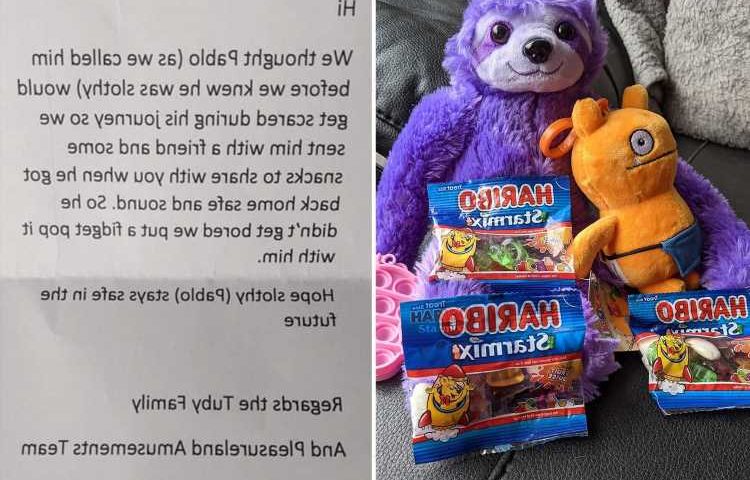 A MUM was blown away by an "amazing and kind" gesture that saw people return her son's favourite cuddly toy to him after he lost it.

Helen Lupton felt "awful" when her son Blake misplaced his toy, a purple sloth aptly named Slothy, while they were out at an amusement park and couldn't believe her luck when the toy later showed up at her door. 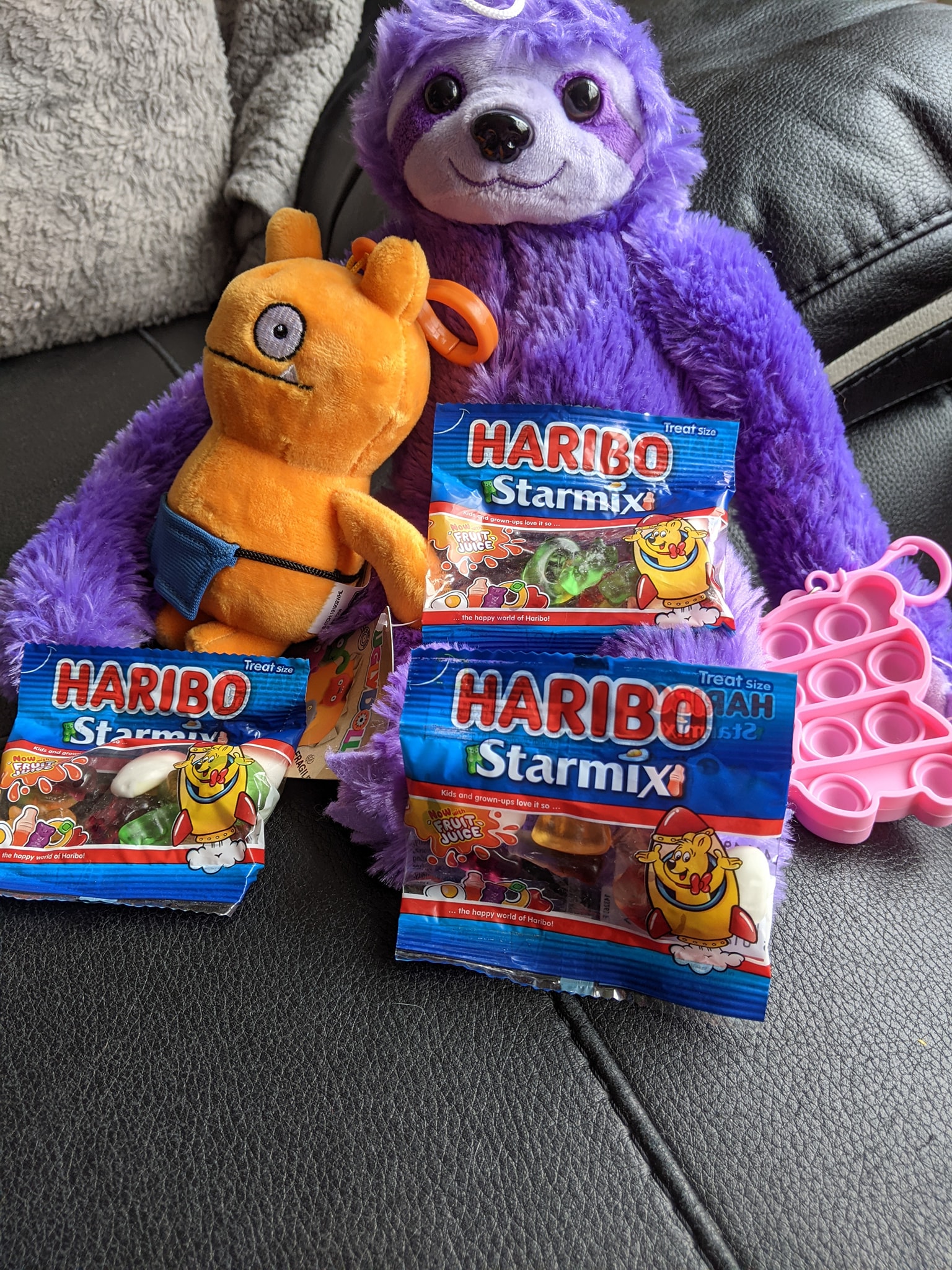 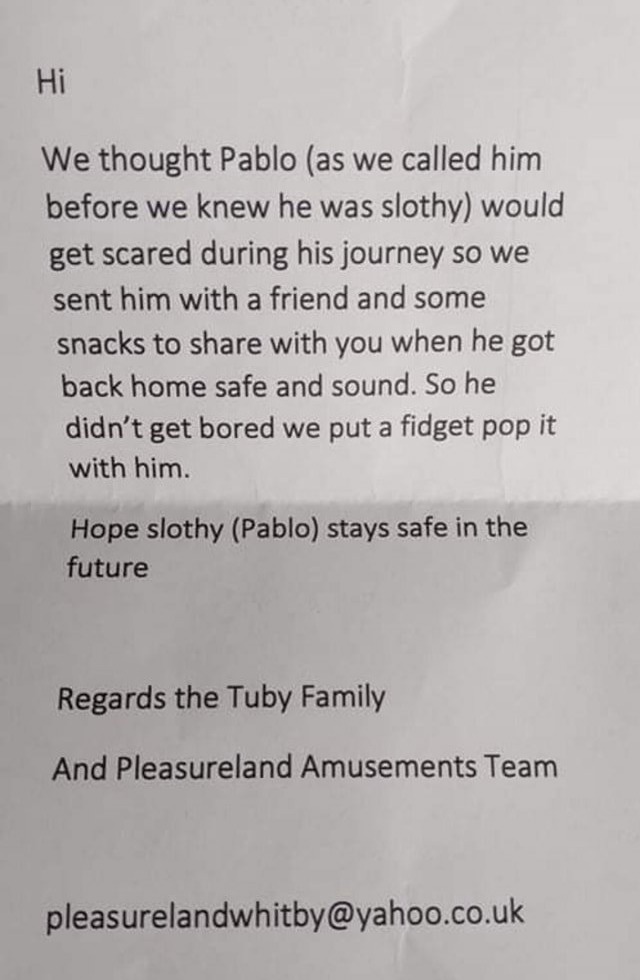 She had contacted Pleasureland Amusements in Whitby asking if Slothy had been handed in, but was told no sloth toy had been found initially.

So, you can imagine her surprise when she later received a message from staff revealing that Slothy had decided to show up.

Posting to Facebook, Helen shared that she had offered to pay postage for staff to send Slothy back to his rightful owner, but she never expected what then turned up on her doorstep.

Sharing the story in group Family Lowdown Tips and Ideas, Helen wrote: "We think this deserves some recognition! So we spent the day in Whitby and Blake took his favourite toy – slothy! (A purple sloth).

"Spent all day there and got home late and suddenly realised slothy wasn't with us!! So we sat and worked out where we could have lost him and worked out it was inside Pleasureland Amusements, Whitby. Or just outside there roughly.

"Anyway next day I messaged them with no luck nothing handed in or in the lost and found box. So we gave up hope of finding him. And told Blake that slothy had such a good time in Whitby he decided to stay a little bit longer. Blake eyes filled with tears and I felt awful."

Helen revealed she was "frantically trying to source" another Slothy to replace the one Blake had lost, but to no joy.

We told Blake that slothy had such a good time in Whitby he decided to stay a little bit longer. Blake's eyes filled with tears and I felt awful

Luckily, her prayers were answered as she received another message from Pleasureland Amusements informing her that they'd managed to track down Slothy.

She said: "I was so surprised and delighted and told Blake and he was so happy! I asked if they could post back as we were not local and they kindly obliged. Few days pass by and we get this back…"

Not only had the staff returned Slothy but they also threw in a couple of toy key rings for Blake and several packets of Haribo sweets.

They included a heartwarming note which read: "Hi, we thought Pablo (as we called him before we knew he was Slothy) would get scared during his journey so we sent him with a friend and some snacks to share with you when he got back home safe and sound.

"So he didn't get bored, we put a fidget pop in with him. Hope Slothy (Pablo) stays safe in the future. Regards The Tuby Family and Pleasureland Amusements Team."

The team told Helen in a message that there was no need for her to reimburse them for postage costs, as they said: "We have all been a child with a friend like Slothy and we all know how important they are to a child.

"So it was nice to make them both get back together… good to see your son is so happy to have him back."

This was such an amazing, kind gesture we were blown away by it. They made such an effort

Praising staff for the incredible efforts they went to, Helen added: "We think this was such an amazing, kind gesture we were blown away by it. They made such an effort to return Slothy to him and at a cost to themselves.

"So much we hear bad news but this will surely brighten your day and make you think there is good, honest, kind and generous people out there!"

Thousands of people liked Helen's Facebook post, with hundreds commenting and revealing how moved they were after reading about the sweet gesture.

One mum commented: "Why am I crying?"

Another said: "Thats a lovely thing they did, just goes to show there are some caring people out there who will go above and beyond to help."

A third person added: "This finished me off….Wonderful to hear some positivity in the world! Lovely caring people clearly xx."

"Got me in tears well done everyone! We lost a similar so I know how it feels," added one more, while another posted: "Love this, kindness goes a long long way." 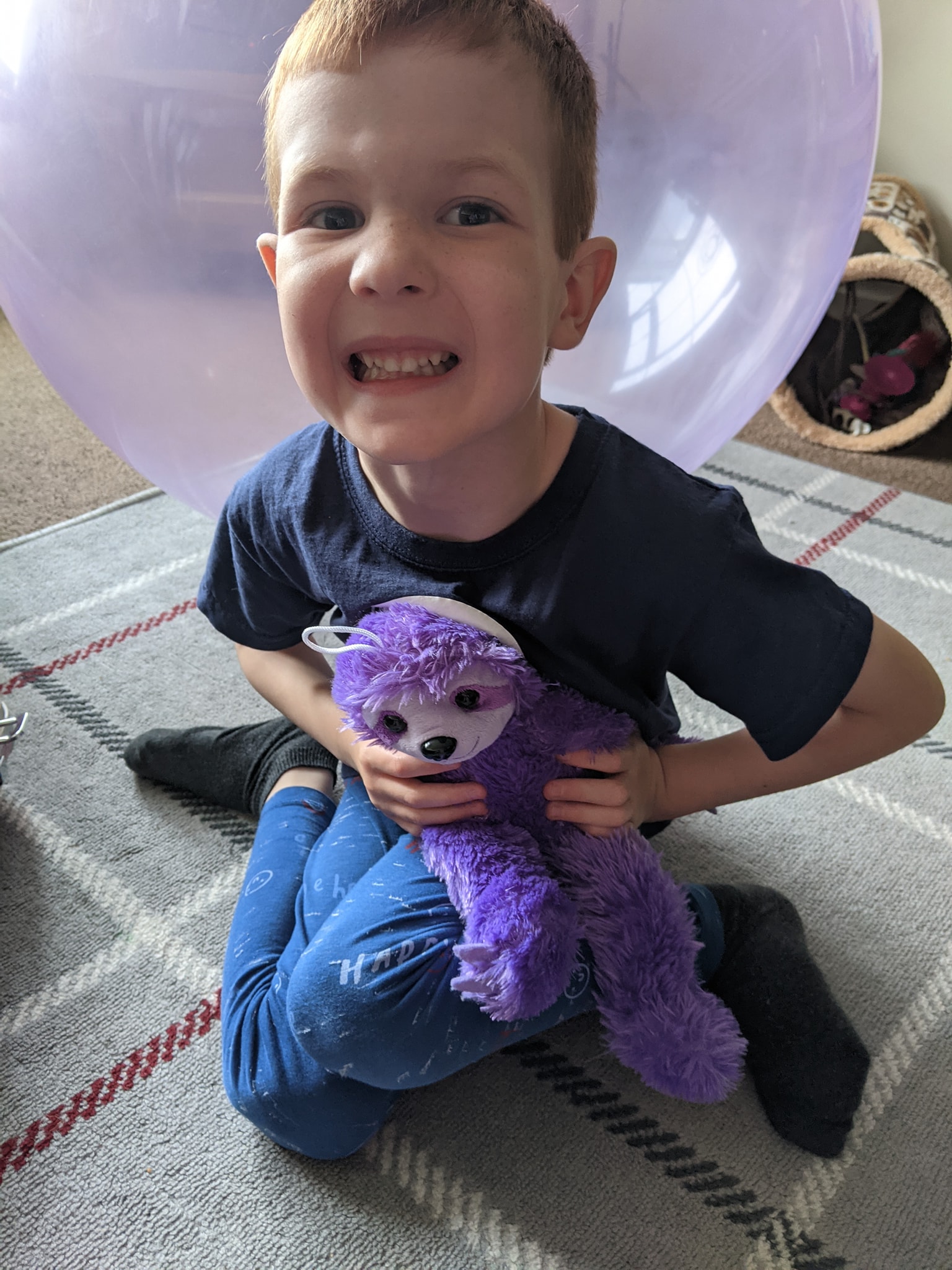 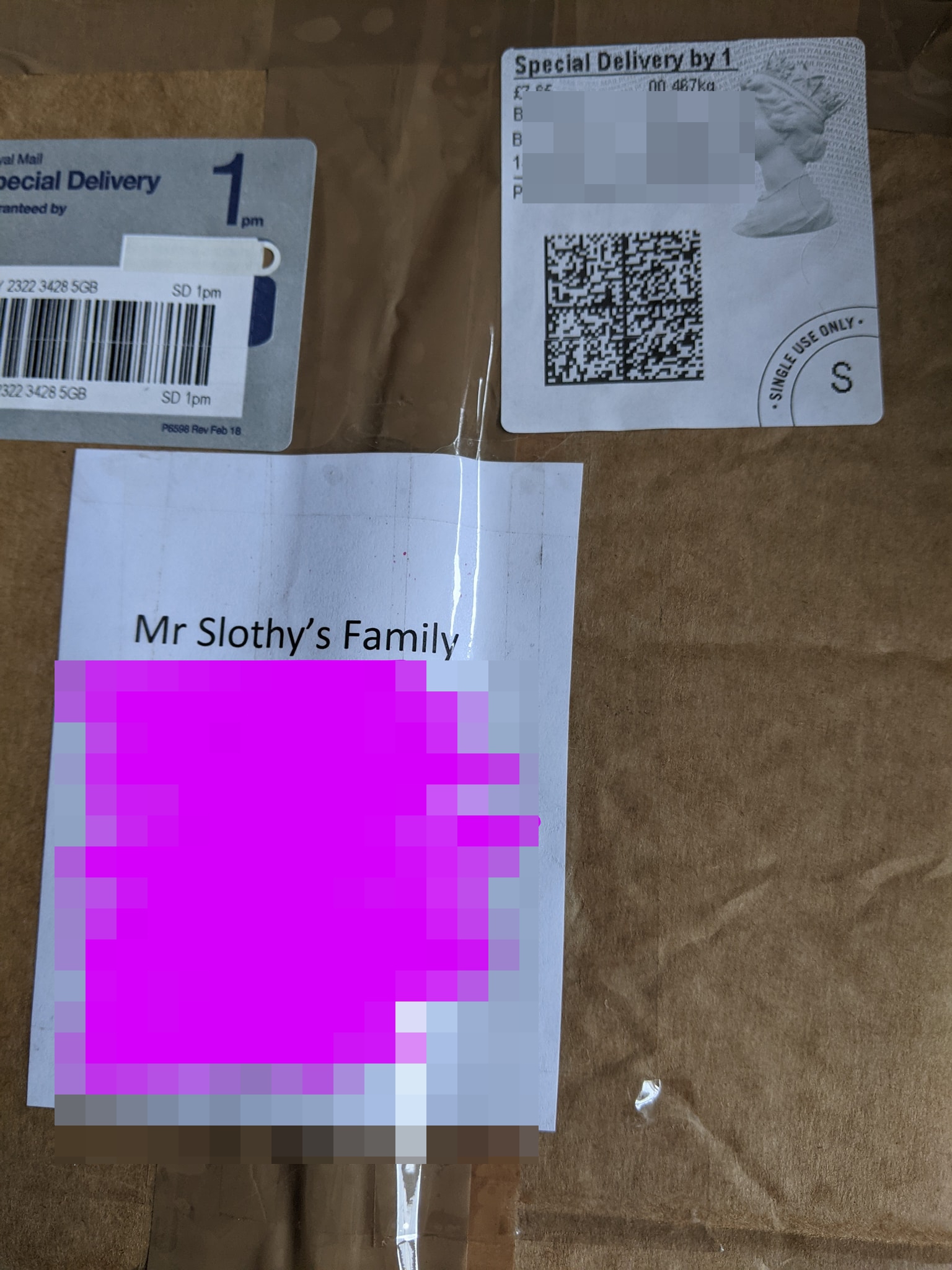 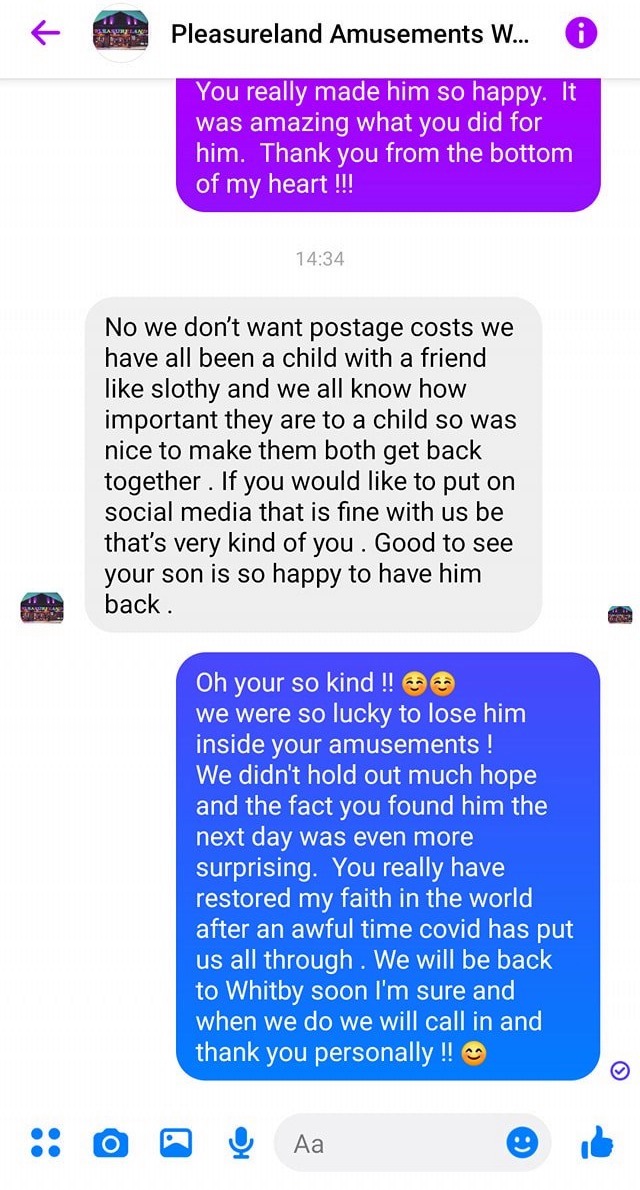 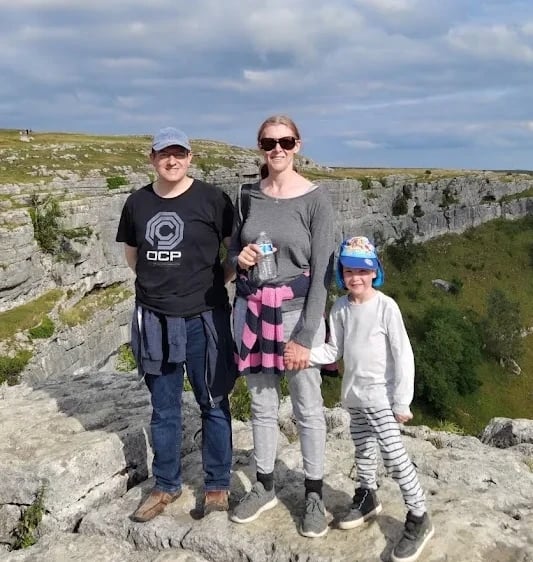 Meanwhile, a stranger leaves stressed mum with crying baby a note on her car – but it’s not what you’d think.

Plus, one mum was mortified after discovering her six-year-old daughter has been leaving secret notes for the cleaner & they’re VERY demanding.