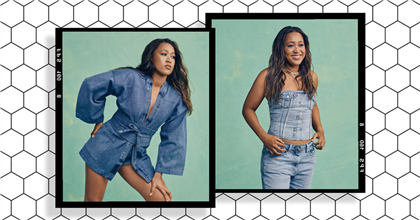 Written by Naomi May

The tennis star serves a serious sartorial ace in the campaign for the collection, which is crafted entirely from vintage denim.

No stranger to using her time in the spotlight to make a sartorial statement, Naomi Osaka is once again making a splash in the world of fashion with a new, limited-edition collaboration with Levi’s.

The four-piece collection, which is crafted exclusively from upcycled vintage denim, was born from an ongoing partnership between the pair, with Osaka imbuing the quartet with touchpoints from her life, including a reimagined and re-purposed denim kimono, a nod to Osaka’s Japanese heritage.

“I always loved wearing kimono when I was a kid,” Naomi says. “So, to be able to do it in denim felt really different and a bit unexpected.”

Alongside the kimono in the range sits a pair of crystal fringed 501 denim shorts (Lil Nas X, eat your heart out) and a denim bustier, which was crafted by the brand by recycling and re-working Levi’s denim trucker jackets.

“I liked the idea of the bustier while I was sketching it,” Osaka notes. “But I love it even more now that it’s been brought to life.”

The four-time Grand Slam singles champion first joined forces with Levi’s earlier this year, when she starred alongside Jaden Smith and Leyna Bloom in the brand’s Beauty of Becoming series. Levi’s describes her as “a powerful young voice in the world of sports whose authenticity and willingness to stand up for important causes has helped inspire millions. In a very short time, she has become not only an iconic athlete, but a true ambassador for social change.”

The past year has cemented the tennis star’s presence in the fashion world, thanks to ongoing collaborations with Louis Vuitton, Tag Heuer and Nike.

Levi’s x Naomi will be available to shop at Levis.com on 24 August.