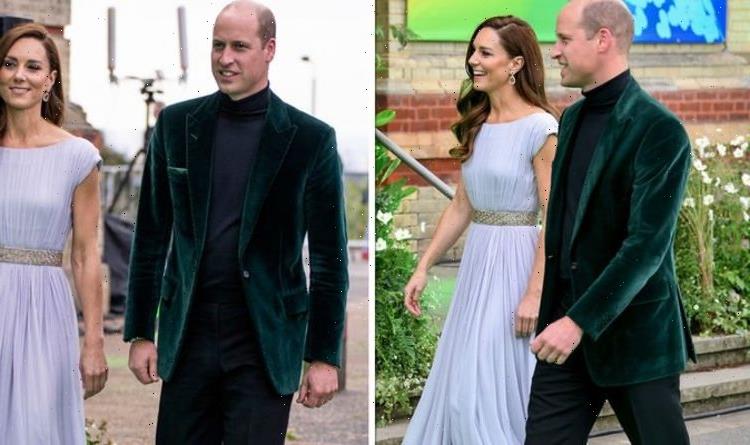 The Prince was accompanied by his wife, Kate Duchess of Cambridge, who looked “like a goddess” in a lilac Alexander McQueen gown. The couple arrived at the Earthshot Prize in what seemed to be an electric Audi with blacked out windows.

He accessorised the ensemble with a silver watch.

Viewers could also just about see a green handkerchief poking out of the pocket of his velvet tuxedo jacket.

The ensemble has a distinctive James Bond-esque feel.

The fictional spy is also a fan of velvet tuxedo jackets.

And he was seen wearing a black turtleneck on the poster for Spectre.

Prince William was out in London for the Earthshot Prize event.

The prize is a “new global prize for the environment, designed to incentivise change and help to repair our planet over the next 10 years”.

He said: “I am very proud of my son, William, for his growing commitment to the environment and the bold ambition of the Earthshot Prize.

“As a world, we need to come together to inspire, reimagine and build the sustainable future we so desperately need.”
He signed the tweet: “HRH The Prince of Wales”.

Celebrities such as Emma Thompson, Emma Watson and David Oyelowo were also in attendance.

No stars have flown to London for the event at Alexandra Palace.

On the red carpet, co-presenter of the awards Clara Amfo spoke about the Duke of Cambridge’s acting skills.

She said: “He has been really great company and I am sure you saw our advert and he was quite the actor.

“We took a few takes and he took considerably less.”