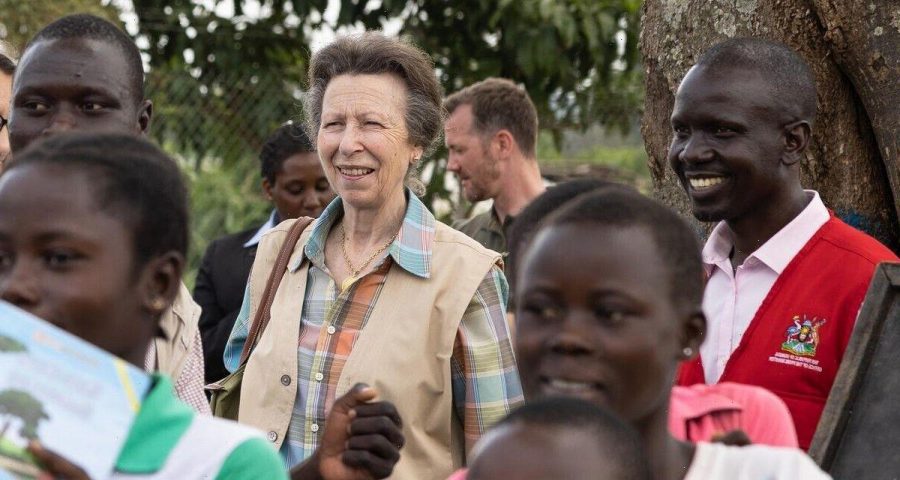 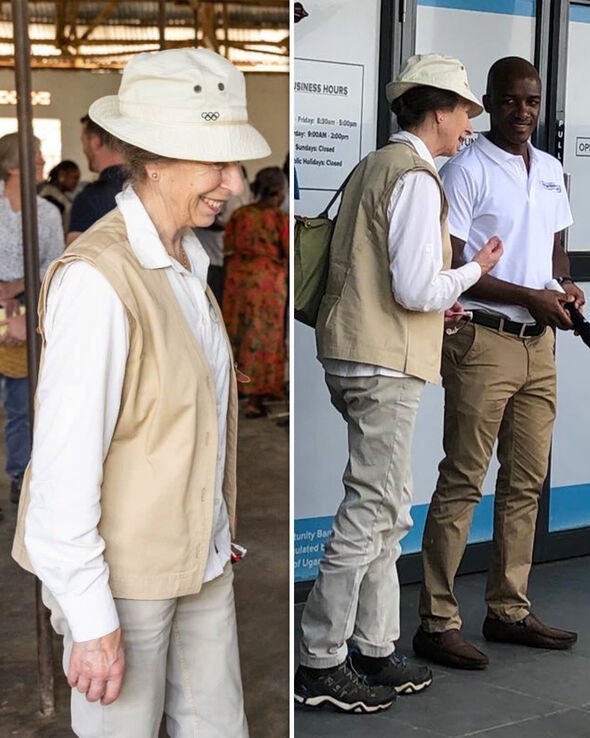 Princess Anne met with the CEO of Opportunity Bank Uganda, Mr Owen Amanya, on Wednesday, October 26. For the occasion, she donned a casual, almost all-beige outfit with a pair of on-trend chunky trainers.

Princess Anne attended the official launch of a new branch of the Opportunity Bank Uganda Limited in Nakivale Refugee settlement in Isingiro District.

To meet with the CEO, the royal was seen wearing a white shirt and a pair of casual, loose grey trousers.

Over the shirt, she donned a thin, beige gilet, which matched her safari-like sun hat.

To complete the look, Anne carried a khaki shoulder bag, which matched the subdued colours of her outfit.

The Princess had styled her hair in its usual loose bun at the nape of her neck, and wore minimal make-up.

But what stood out the most about Anne’s outfit was her trainers: they were dark grey with light grey laces and a chunky, white sole.

The shoes were on-trend and looked similar to branded versions like Asics or Merrells.

Anne has always been a fashion risk taker and often wears trousers with a smart jacket and a comfortable pair of shoes.

According to some fashion experts, another style icon comes into mind: Princess Diana.

Both Princess Anne and Princess Diana wore trainers regularly in their younger days – and older – before other royals, like Kate Middleton, started doing the same.

An iconic image from 1985 shows Anne donning a pair of slim-fit jeans and a navy blue blouse with a blue and white wool sweater vest over the top.

The vest featured white sheep and dark blue trees, as well as light blue clouds and a white sky. On Anne’s feet was a pair of white trainers with red and blue stripes.

The trainers were flatter than the ones Anne wore earlier this week, which were more similar to Princess Diana’s, according to fashion expert and personal stylist Miranda Holder.

Looking at Anne’s whole outfit on Wednesday, Miranda said: “She looked relaxed and comfortable in shades of beige, ivory, and white, wearing chinos, a classic white shirt and an on-trend, safari-style gilet, accented with a coordinating sunhat and a Longchamp bag.

“She finished the look with a pair of stylish chunky trainers – a possible nod to the popular ‘ugly trainer’ trend that has remained popular with everyone from fashion bloggers to music stars for the last few seasons.

“This gives the look a youthful edge, and the footwear is not unlike the oversized choices often favoured by Princess Diana in one of her many iconic sporty looks.”

Yesterday, October 27, Anne wore a similar outfit to Wednesday’s, including the trousers, gilet, and trainers, but donned a checked shirt instead of her white one. This was to visit a Save the Children refugee settlement.

Later in the evening, the royal changed into something more elegant for a dinner at the High Commissioner’s residence in Uganda, dressing up for the occasion.

She wore a knee-length red button dress, with a white blazer on top. But it was the royal’s gold diamond brooch that caught the eyes of royal fans. Anne accessorised with her gold ribbon brooch, which is made of gold studded with diamonds and is supposed to depict a loosely-knotted ribbon.

Although some reports say the brooch is meant to resemble a snake, it is more likely meant to be an abstract design. The piece has been in Anne’s jewellery collection for five decades, with the first time she wore the brooch being at Buckingham Palace in February 1969. The occasion was meeting Colonel Frank Borman, the American astronaut who served as commander of the Apollo 8 mission.