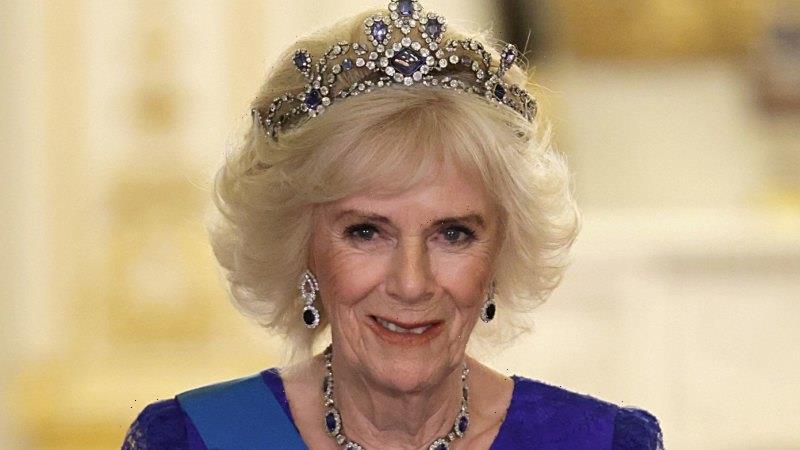 If you binge-watched The Crown, stay-tuned for The Tiaras. While Queen Camilla must wait until the coronation in May to receive her crown, at a Buckingham Palace state banquet she wore her first tiara as King Charles’s consort.

Camilla made two deft statements with her choice of jewels, one of respect and the other of restraint at the celebration honouring President Cyril Ramaphosa of South Africa.

Respect came in the form of a sapphire blue tiara, commissioned by Queen Elizabeth in 1963 to match the earrings and necklace given to her in 1847 by her father King George. The tiara was pieced together using a leftover sapphire and diamond necklace that belonged to Princess Louise of Belgium. 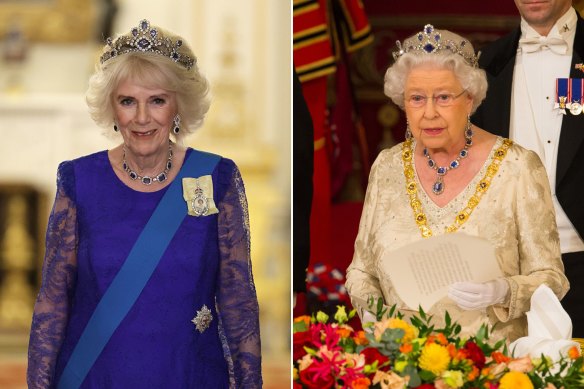 In a twist worthy of The Crown, the necklace was sold by Louise to cover debts after having been locked in an asylum by her jealous husband, following a love affair with a lieutenant. In a line that could easily be uttered by Australian actress Eizabeth Debicki as Princess Diana in the Netflix series, Louise wrote in her 1921 memoir My Own Affairs, “The world dislikes a woman who defends herself.”

The Queen’s opinion of Louise is not recorded, but she clearly liked the jewels, wearing the reconfigured piece regularly. It was last worn by the Queen in 2020 during a private sitting for her official Canadian portrait.

Restraint from Camilla came with the absence of jewellery made from the Cullinan Diamond, which turn up in the Sovereign’s Sceptre and the Imperial State Crown, as well as the brooch referred to as Granny’s Chips by the late Queen.

South African trade unionist Zwelinzima Vavi has called the jewels a “most unfortunate” reminder of the colonial era, while parliamentarian Vuyolwethu Zungala took to Twitter to “demand reparations for all the harm done by Britain” and also “demand the return of all the gold, diamonds stolen by Britain.”

The Cullinan Diamond, which was 3106 carats in its uncut form, was given to King Edward VII in 1907 as a birthday present by the government of Transvaal, once a province of South Africa.

Camilla avoided political scandal by sticking to the family sapphires. Her next big jewellery challenge will be whether she commissions a consort crown for the coronation, following in the footsteps of the Queen Mother in 1937 or borrow Queen Mary’s consort crown, which has been in the Tower of London since 1953.

One drama was averted, but the seeds for a soap opera sequel were sown with the selection of a Bruce Oldfield blue dress to showcase the sapphires. Oldfield was once the preferred designer of Princess Diana, who wore one of his suits to the Melbourne Cup in 1985. 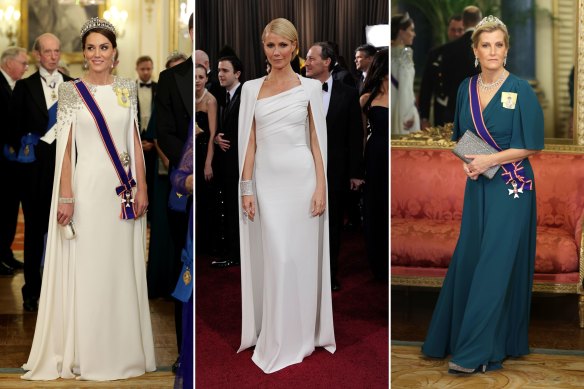 Diana later switched allegiances to designer Catherine Walker, prompting Oldfield to share his feelings of being snubbed in an interview with The Times in 2015. “It wasn’t good,” Oldfield said. “It means everybody looks at you as if to say ‘You’re rubbish, we’re not going to buy from you any more’.”

Patience pays off, with Oldfield now one of Queen Camilla’s preferred designers.

Rather than rock any royal boats Princess Catherine stuck to her formula for fancy occasions, in a heavily embellished caped dress by her preferred red carpet designer Jenny Packham. Imagine Gwyneth Paltrow’s caped Tom Ford dress from the 2012 Oscars encountering a Bedazzler, and you’re close to the mark.

Catherine selected the notoriously heavy and familiar Lover’s Knot Tiara, with its 19 hanging pearls, which was worn regularly by her mother-in-law Diana. The diamonds came from the House of Garrard in 1913, not the controversial Cullinan.

Sophie, Countess of Wessex, hasn’t appeared as a character in The Crown but had a minor role at the state banquet wearing the Wessex Aquamarine Tiara, which can convert into a necklace for more casual occasions. Sophie’s green wrap dress from Suzannah of London was perfect for her background role but the diamanté LK Bennet heels begged for the spotlight. Perhaps next season?