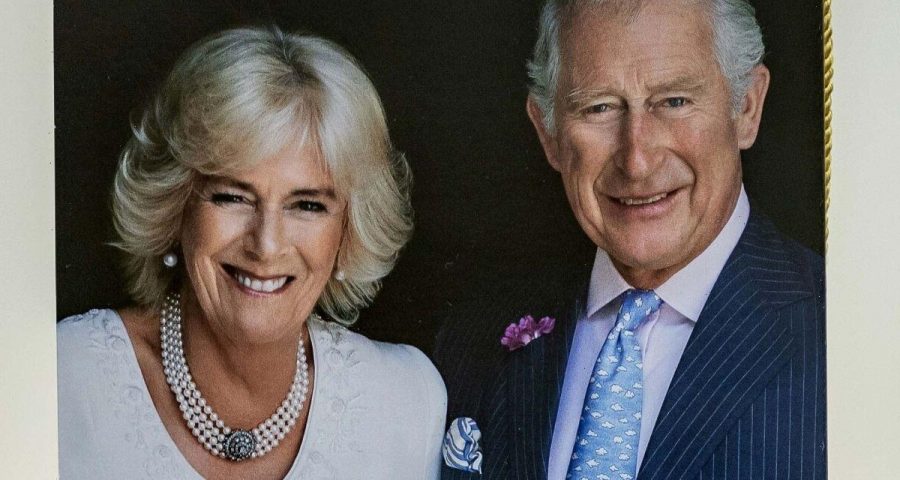 King Charles and Queen Camilla have shared a close-up of the front of one of the first birthday cards celebrating 100 years of age. The posting of messages to mark significant birthdays and anniversaries is a tradition that dates back to 1917 and the reign of King George V, when those celebrating their 100th birthday or 60th wedding anniversary were sent a telegram of good wishes from His Majesty.

During Queen Elizabeth II’s reign, approximately 1.3 million cards were sent to mark birthdays and anniversaries across the UK, the Realms and the Overseas Territories.

The never before seen photograph of the King and The Queen Consort that appeared on the newly released birthday card was taken in the summer of 2018.

Queen Camilla wore a lovely V-neck white dress with long sleeves for the occasion, perhaps not knowing where this photograph would end up being used.

The dress featured beautiful white embroidery along the V-neck of the dress, which is very difficult to see unless you zoom in close to the photograph.

The 75-year-old paired the dress with a four-strand diamond clasp pearl necklace, which Camilla is often seen wearing at royal events.

In fact, Queen Camilla wore this stunning piece of jewellery just two weeks ago at the Ascot Racecourse which she paired with a white and navy dress.

Camilla loves horses and adores horse racing – a passion that she shared with the late Queen Elizabeth II, who was often seen attending events at Ascot.

Fine jewellery experts at UK retailer Steven Stone have taken a close look at the necklace, sharing everything to Express.co.uk that royal fans need to know.

“Camilla stunned in her navy and white dress, though we couldn’t take our eyes off her pearl necklace – a piece that the Queen Consort must be especially fond of as she’s frequently seen wearing it to daytime events.

“The necklace features four strands of cultured pearls. Though cultured pearls are genuine pearls, they’re much less rare than natural pearls, which will reflect in the overall value.

“The pearls are linked by a round cluster of round Edwardian cut diamonds, with a combined weight of three carats. Edwardian jewellery represents femininity, making this a fitting piece for Camilla, who is a powerful and prominent social figure.

Camilla also accessorised in the photograph with her clip-on pearl earrings, the same jewels which she wore for her wedding to Charles back in 2005.

Although the brand and value of the earrings are unknown, they feature a pearl drop from a cubic zirconia.

They are clip-on earrings because the Queen Consort has been very transparent about her fears of ever getting her ears pierced.

During an interview with British Vogue to mark her 75th birthday, Camilla admitted to never wanting to get her ears pierced.

She said: “You know the nice thing about being a grandmother is that you can spoil them occasionally, give them more of the things that their parents forbid them to have.

“The girls are beginning to get into clothes and make-up and, you know, it’s rather frightening when you see them, coming out with pierced ears and a lot of new make-up and funny coloured hair and stuff. [The grandchildren] will try to persuade me, but nothing’s going to pierce my ears.”